This list of burgers in Central Arkansas isn’t meant to be a “Best of” list because taste can be subjective.  I can’t claim to have had all of the burgers in the area. What I can do, however, is to give you a list of some of my favorite burgers in the area based on my purely subjective preferences.  This list is limited to burgers, which means a cooked patty of ground meat preferably beef. This is the third in the 2018 Favorites lists and you can check out the archive here. These are the top 3 Favorite Little Rock burgers I am craving right now in no particular order. 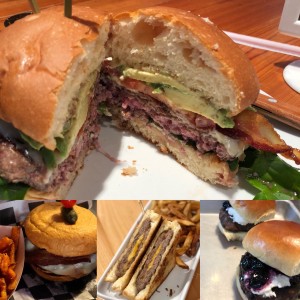 As a reminder, I am not a critic and I have friends who have or do work at many locations around town including The T.A.E. and Big Orange. 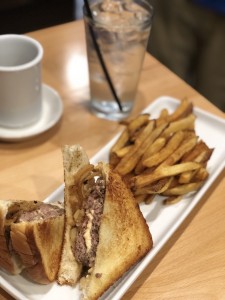 The newest restaurant on this list has only been open for a few months, but it has a longer pedigree.  Cetera and Justin worked together at Southern Gourmasian before it’s untimely closure (R.I.P. Korean Fried Chicken) but they are working together again in T.A.E. – True Arkansas Eatery.  I’ll try to do a fuller write up of what they are offering, but the pimento cheese patty melt is why I mention them today. Homemade pimento cheese turned me around in the past few years when I found out how good it could be and T.A.E.’s is a great example of it sandwiched between thin griddled pattys and toasted to perfection. 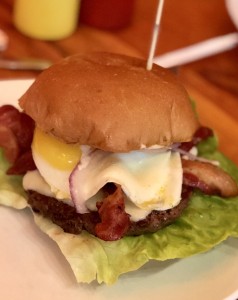 It’s a bacon cheeseburger with an egg on it.  It’s really simple. Big Orange was the beginning of the Yellow Rocket expansions and took two things as the core around which to build the brand – quality hamburgers and classic cocktails.  We’ll talk cocktails some other time, but Big Orange has been putting out excellent hamburgers, cheeseburgers, and even nonburgers for years now but my favorite is still a medium rare Farmers Burger.  It is just a bacon cheeseburger with an egg on it, but this is one of the great truisms that adding a runny egg makes things better. 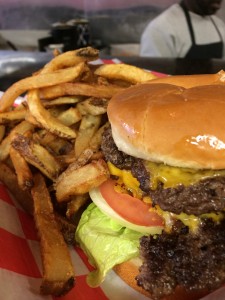 A double cheeseburger from a classic Little Rock place hits the spot for a lunch.  The Box is in its second location after the original was bought … but they took the griddle from that building and transplanted it to the new location, adding another [[]] eatery on 7th Street! The Box provides a salt crust southern griddle style burger, and you can sit at the bar in the restaurant and watch them put it together quickly and efficiently.  If you want a no frills diner style burger, it’s hard to beat The Box. 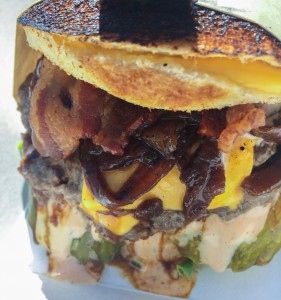 The excaliburger took a long time to get rolling but it was the premier buzz worthy food truck in town.  Providing a pared down menu with thin patties griddled fresh and sometimes stuffed between grilled cheese sandwiches as buns, the Excaliburger was a glorious sandwich.  It only ranks as an honorable mention because Kyle has taken Excaliburger on a road trip! While I am sure we will see the Excaliburger back in Central Arkansas again, for now it is travelling to share the burgers around the United States and is just a wistful memory here.

That’s my list of my favorite burgers in central arkansas right now! What are your current favorites?  Drop a comment here, or any other social media and let me know!