Welcome, one last time, to Mixology Monday – the monthly online cocktail party. After eleven years, Mixology Monday is being laid to rest. While this is the 116th edition of MxMO, the time has come, as all things must, to go along their merry way. As with all parties, there is always someone running late, and I fall into that category. Life has gotten a bit more hectic and blogging has suffered, including my participation in Mixology Monday. I can’t but help feel a small bit responsible for that part in contributing to the passing of this tradition.

Fred, of Cocktail Virgin, concocted our last theme – The Irish Wake. As Fred describes in his announcement post:

The theme for this month’s Mixology Monday (MxMo CXVI) was picked by myself, Frederic of the Cocktail Virgin blog. The theme I chose was “Irish Wake,” and it was a tough decision to pick this theme and make it the last. Mixology Monday has been around for 2 months shy of 11 years yielding 116 themed-events. Between lagging enthusiasm for bloggers to host events, low numbers of drink posts, and my waning desire to push the online cocktail party uphill, I had been considering this end for a year or so. Then at the tail end of MxMo 114 as I was trying to enter the roundup post link in December, I discovered that the Mixology Monday Word Press site had lost its log-in module and I was locked out. We did MxMo 115’s announcements solely by Twitter and word of mouth, and it just did not feel right without a formal home base. It was a sign.

So for this final theme, the Irish Wake, I elaborated on my choice with the description of, “The Irish wake is a funeral tradition that is a send-off that begins at the time of death until the body is handed over to the church. It is viewed as a crucial part of the grieving process. My first Irish wake was a little over a year ago when Boston barman Ryan McGrale met his untimely demise. While the wake part with the family was sober, the mourning process with the Boston bartenders and the New York City ones who traveled up was most certainly not. Irish whiskey flowed… So what better way to celebrate the life and times of Mixology Monday and its 11 year run as the premiere ‘monthly online cocktail party’ than with Irish whiskey. For this theme, the approach is two fold. You can go traditional and generate or uncover a cocktail recipe calling for Irish whiskey. Alternatively, you can talk about a personal moment either where Irish whiskey played a role in life or where drinks in general helped the grieving process.

While I have come up with a cocktail centering on Irish Whiskey, I first wanted to reflect on Mixology Monday itself. I stumbled onto Mixology Monday when Paul Clarke was running the show back in 2007 and silently watched along, a lurker in the cocktail blogosphere, for some time. Eventually, I got up the gumption to participate once this meager blog was launched. I couldn’t imagine then what a ride I had in store.
Mixology Monday has made me a better cocktalian, a better blogger, and a better person. The themes were often challenging and asked me to stretch from my comfort zone. I read, researched, experimented, and sampled more cocktails and variations than I can recall on account of the calls for drinks in this party. I learned to better balance my cocktails through trial and error, improved my presentation and photography from the inspiration provided from the fellow participants, and enjoyed getting to take part in this corner of the cocktail culture revival.
I clarified my writing through this process. Not only did I try to make my recipes clear and accessible, but also learned ( i think) to better convey the story that I was telling and the creative process I followed. I used Mixology Monday as a way to record how I found the inspiration for the drink and recorded the trials and errors. I tried to take part in the community being granted the honor of hosting this party several times. I truly felt that I had a place among these cocktail luminaries and writers as a humble home bartender with a little spark of something that let me in the door.
Most importantly, Mixology Monday was and shall always be a statement of community. I “met” many people through this series and got to know them through drinks and social media interactions. I felt a place of home where fellow bar nerds would geek out and come together to raise a virtual toast to the absolute joy this hobby, pastime, and avocation brings.
I made true friends.
From Muse of Doom, a wonderful lady full of inspiration and boundary pushing innovation to Doug Winship at the Pegu Blog from whom I absorbed as much tiki knowledge as I could, there are true friends that I cherish that became a part of my life through this. Stacy Markow in Dallas and Dagreb in Canada have shared laughs online and fun times. There are many more who have inspired me with their work, including the heroic and nigh tireless efforts of Fred, our fearless leader and master herder of the cats who took part in this distinct and wonderful moment in time forever memorializing the return of cocktails and cocktail culture to our psyche.
On to the drink!
Not the least of my busy schedule has been because the misses and I bought a house and moved over this past weekend. Hopefully that is reason enough for me to clock in a little late, but as I examine my new bar space I fall back on old classics. For this Irish wake, I decided that an Old Fashioned seemed an appropriate starting point. Irish Whiskey, though, doesn’t always stand up well to the assertive flavors found in an Old Fashioned, so I augmented it with the overproof rum of the moment – Plantation O.F.T.D. The bitters called for careful calibration and in the end, a mixture of Black Walnut, Whiskey Barrel Aged, and Peychaud bitters came together. The final piece, upon tasting what had come before, was the choose the orange twist to highlight the sweetness and act as a mellowing agent to the rest of the drink. To name it, well, a wake goes hand in hand with a procession, and this cocktail is a procession of what MxMO taught me, and the small hope that one day I may see a new generation take up the mixing glass and have their own monthly online cocktail party.
The Irish Procession 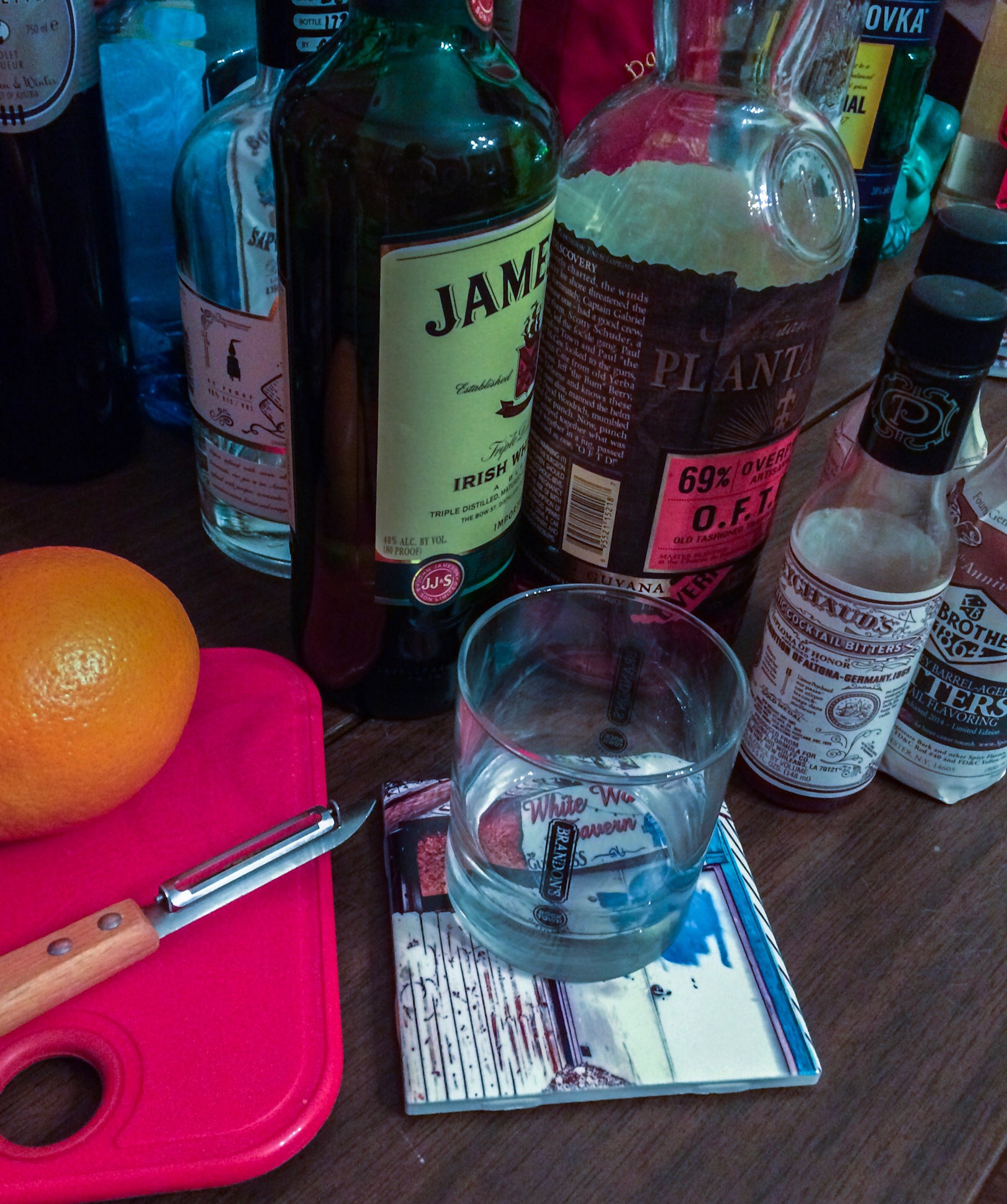 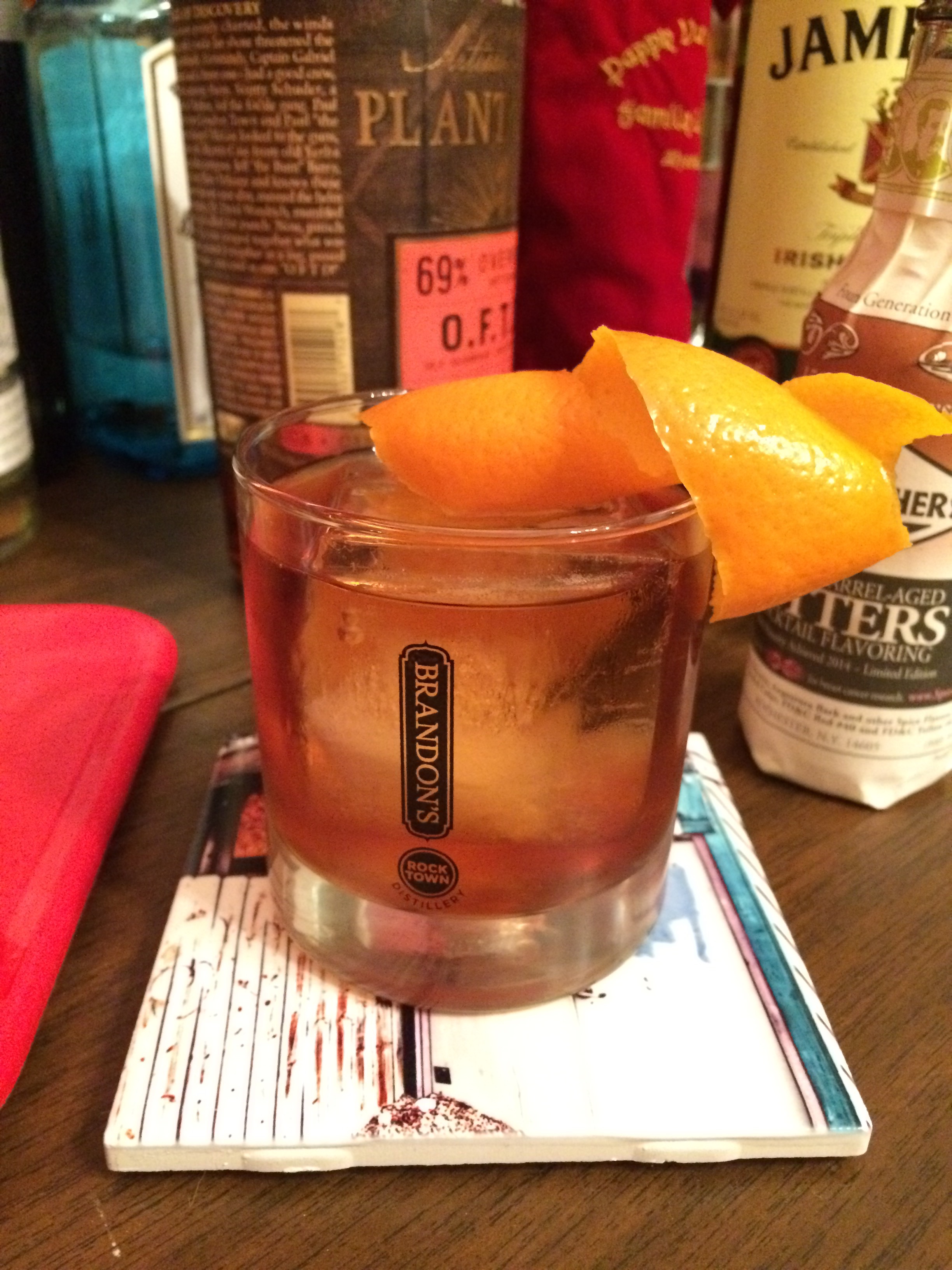 All told, this is a terribly smooth, and likely dangerous, drink. The Irish Whiskey’s easy drinking reputation gives the O.F.T.D. a chance to breath and highlights the spice in the rum through the bitters. The orange gives this a fragrant nose, but the whiskey comes through in the most defining part of this drink – a smooth and slightly aged character with just a hint of viscosity that packs a huge flavor.

To Fred, Paul Clarke, my friends, and all the participants in MxMO over the past decade – cheers!