Welcome back to Mixology Monday, the monthly online cocktail party! Some months, this is the only thing that gets me to post and I will admit that I ran behind to get this one together.  This month, Rebecca of The Shrubbery challenged us with “Drink Nerdy”! As Rebecca described it:

The thing that unites everyone who participates in MxMo is our love of of cocktails. We love the history, the alchemy, the artistry, and of course the drinking. Loads of us go to conventions, collect memorabilia, read books about all manner of boozy subjects, and tour distilleries like they’re sacred places. One might say, we’re nerds. I say, what else are you nerdy for? For the purposes of this challenge I’m going to define a nerdy pursuit as: anything from or related to science, science fiction, fantasy, video games, role playing games/characters, or comics. Come up with a cocktail that celebrates or is inspired by a nerdy thing you love. A Cosmo variation for Neil deGrasse Tyson? The perfect sip for Sarah and her Goblin King to share? A beer based cocktail for that barbarian you played in your college D&D game? Star Trek? Anything you are enthusiastic about.

Now, I have had a terribly busy month and almost didn’t get to this wonderful prompt! It will have to wait for another time for some of my brainstorms like “By Gimli’s Beard” beer cocktail in my mug of Gimli’s head, a Saurian Sour with improvised Saurian Brandy (since I am fresh out), or any of the other myriad ideas I had.  Instead, I turned to some old favorites and old companions – The X-Men.  I took the inspiration from Cyclops for two reasons – 1) Campari makes a beautiful red color that reminds me of his eye beams; and 2) Cyclops has long been one of my favorite X-Men.  Comic books in general have provided an outlet for my imagination over the decades – as a child the fantastic world opened up; as a young adult I saw the evolution of modern mythology as we retold these archetypal stories; as a less young man I see the generational struggle of stories as they come up against the wall of continuity left before them.  They are a cultural lingua franca with my friends and serve to inspire to this day.

Cyclops was often overlooked, or used as a straight man to other writers more interesting characters but as an oldest child I saw in Cyclops the duty and responsibility that is often assumed.  There is a regret and sadness that makes his character evolution poignant and his leadership role bitter-sweet.  In the comics, his optic blasts have been described as Force Blasts, blasts of pure concussive force without heat or recoil.  Turning to Campari, and the classic Negroni recipe, I replaced the vermouth with dry curacao and added rhubarb bitters.  The dry curacao kept the drink more like an Old Pal, but with that bitter sweet citrus in the prominent category while the rhubarb bitters brought out the hints of spice.  The drink, while quickly shot and rapidly conceived, does make me think of Scott Summers and I will certainly raise my glass to Rebecca for inspiring this nerdy digression. 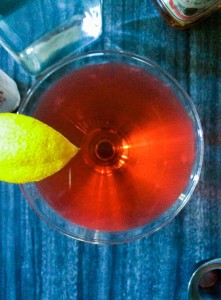 What is in your nerdy background?  How do you find the glee and joy in your nerdy loves in cocktails?  Most importantly, though, what would Professor X drink? 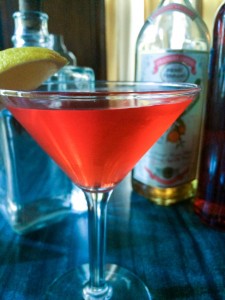