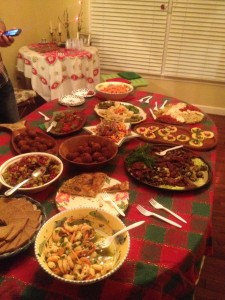 The Feast of the Seven Fishes is an Italian-American tradition that comes from history, culture, and religion. This meal is the single most important meal of the year in our family as it is with many other Italian-American families across the nation. When I wrote On Eating Well, I talked about the importance of food as an intimate sharing of life with other people and of the importance of gathering around a table with other people. This dinner exemplifies those ideas. Over the years, we have shared pictures of our Feast of the Seven Fishes on social media often with a great deal of feedback and appreciate comments. This year, I wanted to sit down with my father and share the tradition more fully with you. This week will be devoted to the Feast of the Seven Fishes. Today we will go into a little bit of the history and significance of the meal followed by posts later this week on the antipasti(appetizers), i primi (first or pasta course), i secondi e contorni (entrees and sides), and dolce (dessert). I hope that by the end of the week, you have seen some of the family and community that comes with this meal whether your personal holiday tradition is the Feast of the Seven Fishes or something different.

The Feast of the Seven Fishes is a peculiarly Italian-American tradition. The Italian-American community treats Christmas Eve differently than native Italians. Why? There are certain theories on this and we will talk a little about those. The Italian Diaspora saw millions of Italians leave between the 1860s and 1920s as Italy was being unified. Simply put, Southern Italy was (and is) far poorer than Northern Italy. The Southern Italians who left saw a future for themselves and their families by crossing the ocean and took with them a lot of their family traditions. These traditions were derived over millennia from before the Roman Empire through the rise of Christianity and Catholicism.

Because of the strong religious background, Christmas Eve held a special place in the calendar for Italian families. It marked the end of Advent and the Vigil for the birth of Christ. This Vigil or Vigilia evolved to a dinner among the family and across the oceans, Italian-Americans with newfound abundance and relative wealth expanded the tradition to the Feast of the Seven Fishes. In observant Catholic families, the vigil of the holy day of Christmas was a day of abstinence and fasting, an Ember Day, where no animal meat or fat was to be consumed, similar to the Fridays in Lent, and where no snacking between meals would occur. This led to the use of fish and seafood extensively in the Feast of the Seven Fishes, including the traditional baccala or salt cod as well as the larger than usual size of the meal.

Nobody is sure when it became referred to as The Feast of the Seven Fishes, or even what the Seven is specifically referring to. Some families hew closely to ensure only Seven fishes are served while others serve many different kinds of seafood or other numbers like Nine or Thirteen. The important part of this ritual, however, is what it means.

“Christmas is for family; Easter with anybody else” 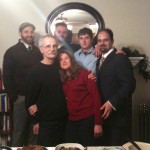 Christmas Eve is for family. It is for the people that you are the closest to in life where you sit down and you celebrate that life together over many courses and preferably many hours. In the Catholic tradition, Christmas is a time of joy and the idea of gathering together those closest to you and celebrating a joyous occasion should seem like second nature to anyone reading. We gather together with our family, and those closest to our lives to join us like family especially when they do not have family close. Throughout college, when my brothers’ roommates couldn’t go home for Christmas, they were brought to Christmas Eve to be one of the family. As we grew up and got married, new families were brought closer to us and came to Christmas Eve to share our community. I hope that you take the invitation this week on the blog to feel some of that community. This isn’t a secretive or hidden tradition, but one of exuberance and of love.

One thing that you see readily apparent in the Feast of the Seven Fishes is “abbondanza” or abundance. One part of this tradition, and the reputation for Italian-American families to feed people in significant quantities, is the poor Southern Italians had found themselves in a land of plenty where they could actually acquire greater and greater quantities of food than they could have in Italy. Combine this with the pride of being able to feed neighbors and large families where previously the family had to scrape by making the most of what little they had and you have a recipe for the culture of gastronomic abundance. Our family does the Feast of the Seven Fishes more elaborately than many others but there is an additional reason for our abbondanza. When we moved to Little Rock, Arkansas, we found ourselves without a large Italian-American community. My father focused on Christmas Eve, and the Feast of the Seven Fishes, as a landmark of the year that loudly and proudly proclaimed our heritage. This was about instilling the traditions and the pride of where our family came from when we were not reminded of our heritage on a daily basis. Our Feast of the Seven Fishes connects us to our family and in a larger sense to the history of Italy; our abbondanza connects us to a culture not as widely represented where we live.

The recipes come from many sources. These are recipes that are traditional in Southern Italian culture; these are recipes passed down to my Father from his Father and Mother before him; these are recipes we have modified over the years. For example, we don’t make use of the traditional baccala (salt cod) just because it isn’t as common here and it is a lot of work when we can use cod in other ways while some families see the baccala as a non-negotiable part of the tradition. We will share how we prepare and present the Feast of the Seven Fishes in the DiPippa family with you this week.

The Structure of an Italian Meal

The formal Italian meals are structured a little differently than formal American or English meals. I will break down how we slightly modify the structure of the classic Italian meal for our Feast of the Seven Fishes. The recipes that follow this week are going to be scaled for 4-6 people, though our family Feast of the Seven Fishes has at least 20 people in attendance.

Before the meal itself, you start with the antipasti, or Before the Pasta, course often served with an lighter aperitif to stimulate the hunger. 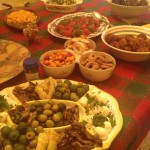 The first course of the actual meal is traditionally the course of pasta or soup. In Italian cuisine, the Primo is usually the heaviest and most filling of the courses allowing for smaller cuts of meat or seafood served family style in the next course. We usually have three different pastas as part of the Primo on Christmas Eve 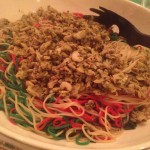 The Secondo is the main entree course – here the chicken or pork cuts would be served to the whole table, but for Christmas Eve, you see Fish broiled in the Adriatic Way, pesce al cartocchio, or whole roasted fish presented to tables. This is paired with the contorno or side dishes of vegetables and pulses. 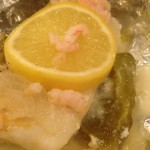 Dessert rarely appears on an Italian table absent a feast or special meal such as Seven Fishes. We will look at the traditional desserts we serve as well as the tradition of the afterdinner coffee and digistivi or cofffee killer sips such as Fernet Branca, Limoncello, and the like.

I hope that you will come back this week for the rundown of each course to share our family tradition.