This month on Mixology Monday, the online monthly cocktail party, Shaun and Christa of Booze Nerds gave us the theme of Standoffish. Specifically, they wrote:

Now that we’re into the cold weather, it’s a good time to be bringing out the richer, stronger ingredients for use in cocktails. How to use them in good proportion though, where they speak up but don’t overwhelm? Well, one way is to include them in smaller amounts, perhaps slightly offset from the other ingredients in one way or another. They can introduce themselves at the start or the end of the drink, or shepherd the other components into a cohesive whole, depending on how they are used. Which brings us to this month’s theme: standoffish! We’re looking for cocktails that use at least one non-garnish ingredient that is not stirred or shaken with the others. Rinses, floats, foams? Sure! Mists? Why not? We welcome whatever your creative geniuses can come up with.

I’ve played around with washes before in some of the Mixology Monday cocktails, such as with the Naval Regulation and thought I would return to that well once more with the wonderful assertiveness of Islay Scotch.  One of the iconic “wash” based cocktails is the Sazerac, where a rinse of absinthe or Herbsaint in the serving glass adds the beautiful nose of anise to the drink when it is done.  This is, basically, a variation on an Old Fashioned and I started from that basic idea working forward.  I will admit to being busier than usual and having less time than usual, otherwise I may have taken that foam challenge.
If I am going to use Scotch as a wash, specifically a Laphroaig Islay style to get the peaty and smokey nose, I need to make sure that the drink itself is either subtle enough not play off those notes or bold enough to blend those notes.  Looking through the ever trusty liquor cabinet, I notice my White Dog Whiskey in the back.  If you don’t know, a white dog whiskey or moonshine is an unaged whiskey meaning that it lacks the characteristic oak and aging flavors instead drawing what flavors it can from the actual distillate.  Rustling around a bit further, there is the Becherovka that we used last month in The Voivode’s Hospitality.  Becherovka brings a lot of spice to the equation and is also nicely sweetened providing an additional contrast and component of the drink with adding simple syrup or other sweeteners. The final question is whether the drink needed a little “tang” to round out the flavors.
First, I mixed a few different ratios of the White Dog Lightning and Becherovka to find a good balance, and then went to something herbal and a little bit of a citrus flavor in the Cappelletti.  This is an Italian Amaro that has less sweetness than the most famous of the burnt citrus class, Campari, but has a lot of herbal notes and is based on a red wine base.  It is one of my favorite “new” bottles in my bar cabinet.  It completed that alchemical magic of a cocktail by creating something more than the sum of the parts by adding just a little to the glass.  No bitters.  We don’t need them here with the complexity of Becherovka and Cappelletti. 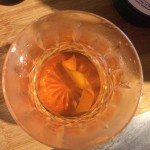 This is certainly a drink for the cooler months.  The sweetness is subdued in the drink by the power of the white dog whiskey and the assertiveness of the Cappelletti.  Translation – This is bitter, strong, and thanks to the Scotch rinse pungent. The act of raising the glass to my lips engaged my senses as the deep smoke and peat of the Scotch infiltrated my nose.  The play between the lemon peel and the smokey Scotch is one of my favorite combinations and it grabbed my attention. The smokiness clung to my palate as the herbal and spicy flavors from the first sip made it to my mouth.  The front end was packed with flavor, competing and arguing with itself that subsided as the drink finished.  The back end of the drink had a clear tang from the Cappelletti bolstered by Becherovka’s spice.
Now for the naming, as the Scotch brought in a wonderful component, but this is based off of a Sazerac … in tribute to the history is the Sazerac and history, I went with French – La Petite Roche. I also apologize for the hurried photos this week as I admit to truly scraping by to get this post in on time. 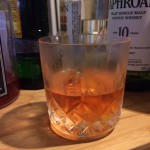