Tonight, the Fourth debate of the GOP 2016 Presidential Nominees is hosted by Fox Business Channel. In the 2012 election, I graded the neck wear of the candidates at the debates and thought we would revisit that idea here again with the nominees.

These should not be considered any comment on the policies or political stances of the candidates, nor should any grade be seen as an endorsement or critique, save to the sartorial choices made.

When evaluating the neckwear of the candidates, these are the ideas I keep in mind:

Gov. Bush has a good dark red color for his tie this evening, though it is in the expected range of colors for this debate. His suit, however, has a few small details that throw off the overall look – it is a bit too big in the shoulders, has a button stance a little too high, and it doesn’t quite match up with his shirt collar.  His collar is a newer style but looks a bit too small for his more traditional suit.  Overall, a respectable “B”. 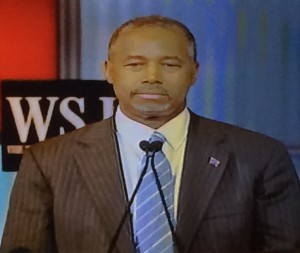 Dr. Carson has a nice pinstriped suit that I do like a lot.  Unfortunately, the suit is a bit too large for him and and he left the jacket unbuttoned at the lectern. I also like two of the three colors on his tie – the dark blue and the light blue stripe.  The problem with the white stripe component is that is begins to fade into the shirt and confuses the eye.   The width of his tie matches the width of his lapels creating a good proportionality but his knot is too small for his suit and tie. 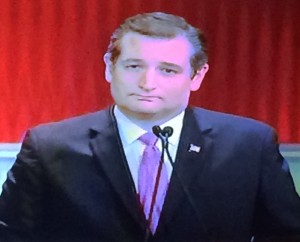 Sen. Cruz has repeated, unfortunately, several of the miscues we saw in earlier debates.  His tie is a classic, wider tie but his suit is a newer cut with slimmer lapels creating a bit of a mismatch.  While his knot is larger than last time, it is still too small for his frame making his head look too large.  Finally, the pindot design of the tie does not read very well on the screen – you can’t assume that your entire viewing audience will have HD. 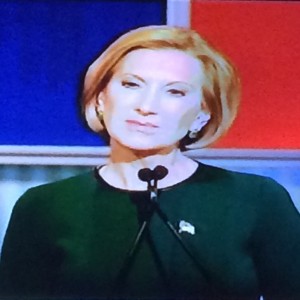 Ms. Fiorina has a nicely cut green dress for this debate that is a very complimentary color for her, especially with respect to her hair.  The minor detailing in the black neckline creates a good framing effect and is accented nicely by her earrings.  Her placement of the flag pin, however, does seem a little bit off and draws attention away from her face.  SHe has the unenviable position of being the nominee most likely to have her attire critiqued and is trying to have a professional and respectable look that doesn’t become the focus of any stories.

Gov. Kasich’s choice of a slightly darker red is a good one, though several other people shared that thought on stage.  His suit was a good size too large for him that was apparent in his collar gap and the amount of fabric under his arms that, when added to the higher button stance, left him looking like he was getting lost a bit in his suit.  His knot was a little too thin, but well formed, in comparison with his collar choices.  Overall, a respectable “B”. 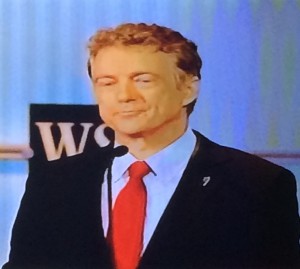 Sen. Paul also went with a bright red tie for the debate, but the pattern of dots on his tie read well on screen because of the size of the pattern – not so small to bleed but large enough to be recognizable.  His knot, however, was a little too small and lacked the nice dimple of a well-tied tie.  The biggest issue for Sen. Paul was that his suit, also, did not fit – the collar gap was distracting to my eyes in several places and the shoulders seemed too large but the waist perhaps too tight.

While Sen. Rubio had a few small problems with his outfit, he overcame them this evening.  He used a much sarker and deeper red color for his tie that worked very well while showing good proportions between his tie, suit, and collar as he has in previous debates.  He had a nice dimple in his knot but the overall look came off rather somber when coupled with the dark suit.  He also had cufflinks, which made him get a quarter point boost bringing him into the A- penumbra. 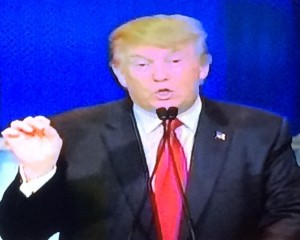 Mr. Trump went to the red tie well this evening with many of his colleagues, but his color was a bit too vibrant causing some bleeding on the screen.  His shoulders were also far too large – you can see the shelf being created as it clearly hung too far over his shoulder in the picture above.  Mr. Trump received the deduction for unbuttoned jacket at the lectern , but also got half of those points back with his cuff links.