Tonight, the third debate of the 2016 Presidential Election is hosted by CNBC. In the 2012 election, I graded the neck wear of the candidates at the debates and thought we would revisit that idea here again.

These should not be considered any comment on the policies or political stances of the candidates, nor should any grade be seen as an endorsement or critique, save to the sartorial choices made.

When evaluating the neck wear of the candidates, these are the ideas I keep in mind:

Wearing a bow tie is an automatic half grade bonus.

Wearing a pocket square is an automatic half grade bonus.

Unbuttoned Suit jacket when standing is a half grade deduction. 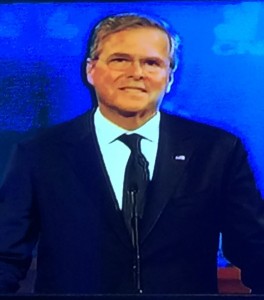 Overall, Gov. Bush ranks an even B. I like the size of his knot relative to the suit and his build, as well as the rakish half-windsor knot itself, but the color is off-putting.  The dark blue of the tie is bleeding into the black of the suit and it isn’t coming off as well as I would like to see. 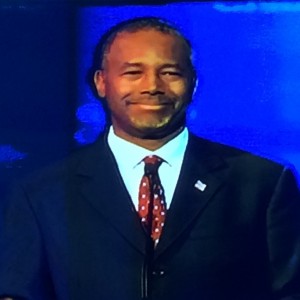 Dr. Carson has a few problems from my standpoint with the suit itself.  It is a little bit too large, a complaint you will see repeated for several people on the stage tonight, but it is also a three-button suit that makes him look shorter.  By having such a high button stance, where the top button is closed, it makes him look broader and shorter. I like the specific red he used, similar to the good dark red used by Mr. Trump, but I also deducted points for the lack of a dimple and because the knot is too small in proportion to his collar and suit. 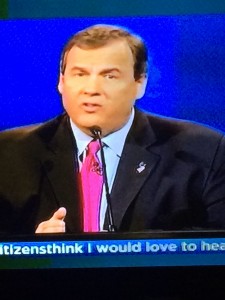 Initially, GOv. Christie is to be commended on having the bright pink tie on stage.  It is a great color for him especially on contrast to the light blue shirt that was chosen.  The dimple is fantastic, but I again would say he would benefit form a larger knot to frame his face.  His suit is a little large through the shoulders, but his build is one that poses particular challenges to fit well.  He would have ranked much higher, but he had unbuttoned his jacket while at the lectern which is a consistent deduction for these purposes. 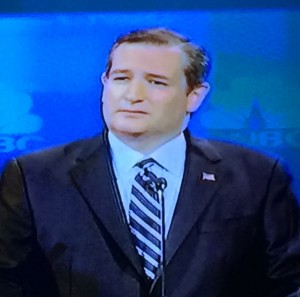 I believe in this picture you can see one of my major complaints for Sen. Cruz – the size of the knot relative to his jacket and to his head.  The small knot only makes his head look inflated which is coupled with a high button stance on his jacket, further messing with our perception of proportions on his outfit.  I am also noty a fan of the matching tie to shirt color which he adopted this evening earning him a slight deduction as did the suit being mis-sized for him. I do really like the tie in the abstract, though with a sharp repp stripe that is a perfect width for his frame. 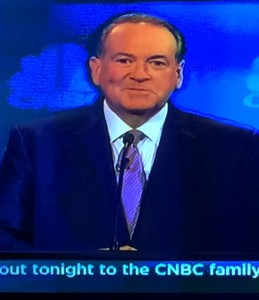 I really like Gov. Huckabee’s purple tie this evening.  It was a nice change of pace from the expected colors and was complementary to the rest of his outfit.  His knot, however, was again too small as others on the stage shared.  His suit was also too large and sometimes would have the effect of making him look larger than he is.  His shirt was properly sized and I though the proportions of his collar to the rest of the outfit was also good. 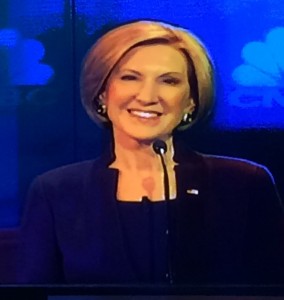 The wine color Ms. Fiorina chose does not show up as well on my photographs but it is a very flattering color for her.  Additionally, she did a great job with proportions again with the jacket hitting in almost the same place sthat the vertical stripes of her outfit in the previous month hit.  She knows exactly what she is doing with her attire.  She framed her face well, with a tasteful neckline and solid outfit. 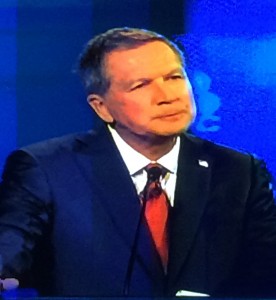 The picture is a bit difficult to see because the microphones this evening perfectly hit the tie knot height of the candidates.  That’s good microphone placement, but bad for us. The red color is an attractive color and there is nothing wrong with it, but also nothing really notable unlike Mr. Trump or Dr. Carson who added a nice pattern to their red ties.  He has a knot that is, unsurprisingly, too small for his outfit and face and a suit that is just a bit too large. Gov. Kasich’s attire played it safe, but didn’t leave him much room to excel. 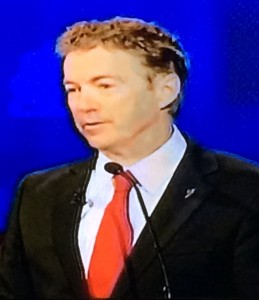 Sen. Paul had the tie that is most likely to make an appearance on a Republican candidate in election season.  It is a solid bright red.  There is little wrong with that, only expected.  The knot itself, however, lacked a dimple and his collar didn’t seem to match up with his suit. It is possible that Sen. Paul has a more modern cut of shirt and a more traditional cut of suit, which would be the opposite of what we have seen in previous debates for this field of candidates. 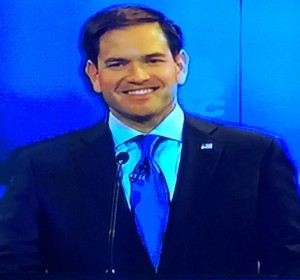 Sen. Rubio’s only real critique is that blue tie on a blue shirt combination that I do not think looks very good. His suit fits.  His shirt fits.  The semi-spread collar matches nicely with his suit and he chose a tie knot that complements that style of shirt.  The dimple is excellent and I will give some credit for a Republican candidate to sport a bright blue tie.

I think the dark red in Mr. Trump’s tie may be the best color on screen tonight.  Unfortunately, his suit is a little too large and there is a clear collar gap between his shirt collar and his jacket at times.  He also went with a traditional point collar shirt, but I think he should have used a semi-spread shirt more like what Sen. Rubio wore and a larger knot to better frame his head.