Ratatouille is the perfect end of the summer stews; the last of the summer vegetables if you will.  It is easy, delicious, and gives you something to do with the last loads of eggplant and tomatoes from your farmers markets.  There are a lot of ways to make ratatouille, from the confit byaldi version that gained fame as the inspiration for the Ratatouille movie’s ratatouille, to the classic version described by Julia Child, Louisette Berthol, and Simone Beck where you sautee each ingredient separately before bringing them together into a faster stew, to this version that takes the least amount of effort but the most amount of time. This is a handy vegetarian, well vegan, recipe that uses your vegetables and tastes great.

Ratatouille can be made with nearly any vegetables, but it really must have eggplants, tomatoes, garlic, and herbs.  Don’t worry about making a huge pot of ratatouille; one of the great secrets of ratatouille is that it is even better the second day! 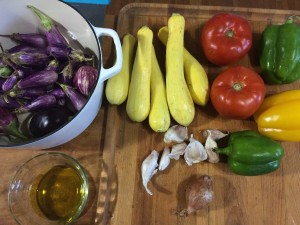 Eggplant Notes
The younger and smaller your eggplant is, the less you need to salt and drain it ahead of time.  If you are worried about a megamart eggplant being bitter, slice it and salt it liberally on all sides letting it sit out on a rack for an hour.  You can then rinse and drain the eggplant to start the cooking process.
Bell Pepper Notes
The easiest way to increase the flavor is to roast your bell peppers.  Remember when did that in the Gazpacho post? If not, reread the instructions there.
Herbage Notes
I like to tie the herbs into a bouquet garni when making this.  I just bundle the herbs into a package and tie it with some butcher’s twine.  When you are getting ready to serve, add more fresh herbs.
Mis en Place Notes
I like to cut my vegetables into different shapes for visual interest.  Sometimes, I cut the eggplant into a dice or easy dice, slice the squash into rounds, and battonet (matchstick) the zucchini. Since we are stewing these long and slow, it won’t make as much of a difference.
Stewing Notes
You’ll notice this is being called a stew, but we don’t have any liquid being added to the dish.  The vegetables themselves are going to supply the stewing liquid between a little bit of salt and the heat.  This liquid is going to have a lot of great flavor that will meld together over the cooking time. 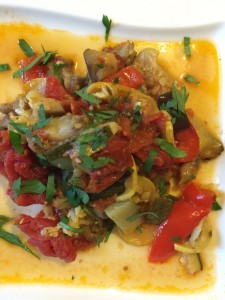 To cook this in the oven instead of a slow cooker, use a large heavy-bottomed casserole set over medium-low heat. Preheat your oven to 350 degrees while you prepare your vegetables.  After layering like described above, cover the casserole and place in the oven for 60 minutes. Every 20 minutes or so, gently press the veggies into the stewing liquid.  Remove the lid and bake another 30 minutes. 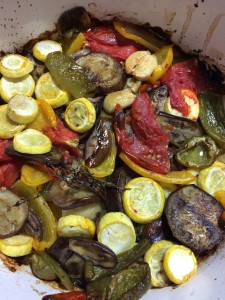 Ratatouille is a lovely dish on its own, but I’ve added a sausage or porkchop to the plate, though that does defeat the “vegetarian” and “vegan” part of the recipe. 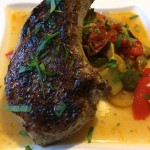 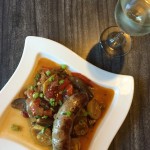