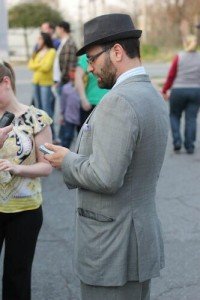 I am a hat fan! I like to wear them nearly every day, and I am not talking about baseball caps.  The majority of what I own is called a “fedora” in popular culture, but hat geeks will recognize them as “trilbys”.  We saw hats make a good comeback for a few years propelled by our interest in the midcentury style embodied by Mad Men and Boardwalk Empire or sharp modern dressing in White Collar. The fedoras and trilbys have been adopted by a diverse group of individuals including hipsters, hip hop, and more.  We have also seen a backlash against these hats as they reached a certain ubiquity, but I think the backlash has more to do with how they were worn than with anything wrong with the hats themselves.

I admit my fixation with hats has a little bit of vanity to it.  I don’t have quite as much hair on the top of my head as I used to and have too much of it left to really think about shaving my head bald.  Hats act to “cap” off a look and I think that they will add a nice counterpoint to the shoes as bookends to an outfit.  Before we get too much further let us define terms for the two major types of hats we will be discussing:

While this name is used for a generic formal hat today, most of what you may be calling a “Fedora” isn’t.  You see, a Fedora needs to have a higher crown and a wider brim.  It is a larger hat, though not so large as a Western style hat. 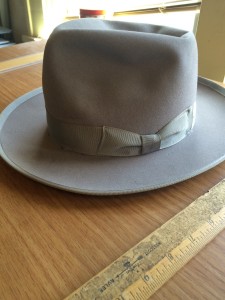 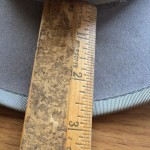 This is what you see more of today.  A trilby is like a jauntier cousin of a fedora with a shorter brim with the back turned up and a lower rise. Honestly, these are my favorite hats to wear. 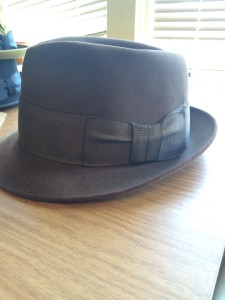 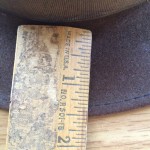 While I have acquired over two dozen hats of different qualities over the past few years, I will focus on two sets of “rules” – 1) How I choose which hat to wear; and 2) what etiquette rules I follow wearing the hat:

How to Choose Your hat?

There are two parts to this question.  A hat will stand out to some degree these days as fewer people wear them.  You should make sure that the hat is suited both to you and to your outfit and occasion.

What Hat is Right for My Head?

Here is another place where the hat backlash occurs.  Hats, like just about all aspects of menswear, are bounded by proportions.  If you have a large head and broad shoulders, even a trilby that fits may look “wrong” on you because it messes with the proportions of your outfit.  If you are lithe, a fedora may look comically oversized on you because the brim extends nearly as far as the lapel of a 70s era suit.  I am fortunate to have a build and head that lets me work with either but you have to know your own body and admit some things won’t work on you.  We may talk about proportions in menswear more in another post.  For now, the broader your shoulders, the broader your hat brim, but not so broad that it looks like you are an extra in a Sergio Leone revival.

What Hat is Right for My Outfit?

Are you wearing a suit? If yes, my first choice is to wear a hat that roughly matches the color the suit.  My light grey suits get the grey hat, for example. 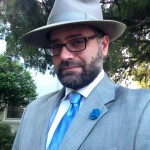 If you don’t have a hat that matches your suit color, I next look to match my leather color.  If I am wearing my navy suit with brown shoes and a belt, I go with a Brown hat.  If the same suit is instead matched with the black cap toe oxfords, I get the black hat out. 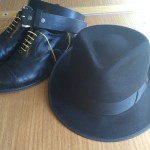 This is where the first part of the backlash against hats comes from – fedoras and trilbys are inherently formal.  Wearing them with t-shirts and shorts doesn’t work.  You are not Johnny Depp.  You cannot pull that look off.   If you are Johnny Depp, please tell people you are reading this blog.

Do I wear hats when I am not wearing suits?  Sure.  If wearing a blazer or sportcoat, I follow the basic rules for suits – look to matching the belt and shoes first. After that, I look to try to complement the level of texture or roughness in the jacket with the hat.  For example, this thicker brown wool blazer is better suited to the more textured hat with the black flecks running through it. 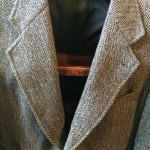 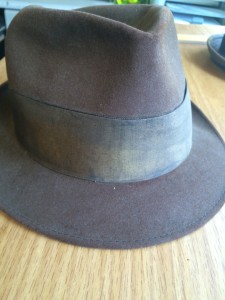 By contrasting the texture of the hat with the texture of the jacket, you create a more cohesive ensemble instead of trying to make it matchy-matchy, in my opinion. You can even go with a different color, like this green trilby to contrast the rest of the outfit. 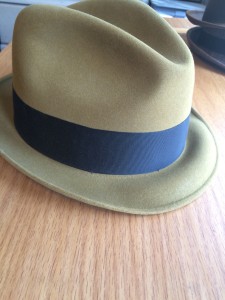 In the summer, straw hats are de rigueur and compliment seersucker and cotton suits well.  The most famous of these is the Panama hat.  The important thing to remember about straw and straw paper hats is that they are not well suited for rain.  While they are sharp and add a nice break from the sun, they can easily be ruined by a summer downpour.  You would be wise to keep a plastic bag close by to protect your hat. 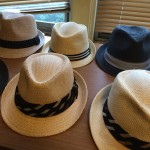 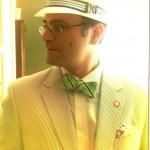 As we shift to fall and winter, look for the heavier wool, felt, and related materials to come out. Just like the suits and coats themselves, the chillier weather and darker colors in the world lend themselves to the heavier hats. 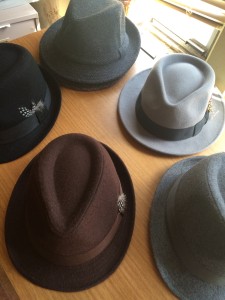 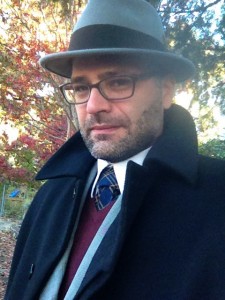 So you want a casual hat to wear when just bumming around on weekends?  Probably time to skip the brimmed hats.  Instead, look to a newsboy style cap. 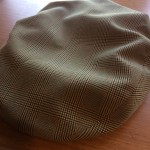 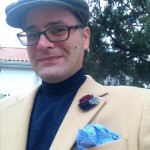 Wear it like you would a ballcap, but it gives you a little bit of old world élan.

How to Wear a Hat?

I prefer a slight askew tilt to my hat, but that is my rakish ne’er-do-well coming out.  It should be snug enough that it isn’t flopping around, but it need not be perfectly melded to your skull. This may be point number two where people are having a hat backlash – too tight hats that happen to be too small that just don’t look right.

More importantly, if you are choosing to wear a hat, you must also accept the implied compact of hat etiquette.  You can’t wear it everywhere and all the time. Below are my recommendations for modern hat etiquette for men.

Generally, hold your hat by the crown, not the brim.  The phrase “hat in hand” refers to holding a hat by the brim.  Keep the part of the hat that hits your head pointed towards you when you remove your hat. Try not to pinch the crown, or you may damage your hat.  Here is where I take a cue from military etiquette, and having removed a hat will cradle it at my side, rather than squeezing the crown. 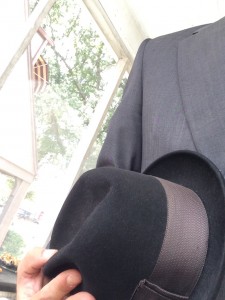 There are a multitude of other styles of hat, such as the pork pie with its jazz and ska history  or the Homburg’s high formality but those can wait for a more advanced post.  Fedoras and trilbys can easily complete an outfit and give you one last little part to make you look sharp.  Don’t abuse the privilege of wearing one of these fine hats – choose an appropriate hat for your outfit and follow the simple rules of etiquette, and respect.