Tonight, the second debate of the 2016 Presidential Election is hosted by CNN. In the 2012 election, I graded the neck wear of the candidates at the debates and thought we would revisit that idea here again.  I took a look at the first GOP Debate neck wear here.  These should not be considered any comment on the policies or political stances of the candidates, nor should any grade be seen as an endorsement or critique, save to the sartorial choices made. 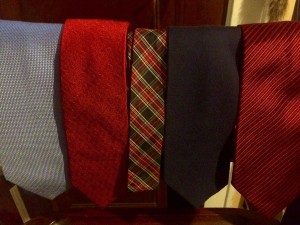 When evaluating the neckwear of the candidates, these are the ideas I keep in mind:

It took a little while because capturing decent pictures of all the candidates proved difficult.  Excuse the imperfect images. 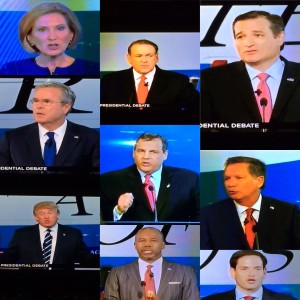 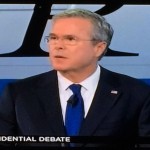 Gov Bush made a good choice with the dark blue tie.  It was well proportioned with his suit lapels and had a good, though not exceptional knot.  On the negative side of things, his collar seemed to be strangely shortened, as though a very modern shirt with a classic suit.  His suit jacket seemed to be a bit too big and the high button stance made him appear smaller than he is. 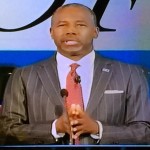 Dr. Carson got several bonus points because he wore a pinstrip grey suit which is a rarity on poilitical debate stages and he wisely added a pockjet square to hisa outfit.  On the negfative side, he lost points for not buttoning his jacket when standing up.  I did like the color and pattern of his red pindot tie, though it was too thin for his lapels.  The knot itself was … strange.  It seemed rushed and not entirely ready for primetime which may also explain the odd roll and behavior of his collar.  If he was rushed in putting on his tie, that would explain the imperfections there.  He also had a collar that seemed just a little too short in comparison to his suit.

Gov. Christie had a better proportioned suit and tie in this debate, but proportions are difficult to nail for a gentleman of his build.  The color of his tie was bleeding on my screen and I feel that his knot was too small for the proportion of his suit and neck.  He had a suit that was noticeably too big in his shoulders as well, likely a difficulty in finding a suit to fit his build. 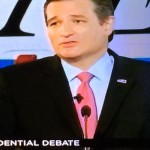 Sen. Cruz had a very nice pink tie with a pindot pattern.  He got a bonus for having the pink tie which is also a rarity at these events. He had one of the better dimples this evening as well. Unfortunately, the know was too small for the collar and lapels of his suit and made his head appear too large.   His suit was too large as demonstrated by the noticeable collar gap (a gap between his shirt and the back of suit jacket when in resting position). 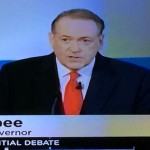 Gov. Huckabee had another red tie this evening that was bleeding on my screen.  While he had a very good example of how to match proportions of lapels and ties for a gentleman of his build, the knot itself was too small for his shirt.  He also demonstrated a noticeable collar gap as well as significantly over-sized shoulders in his jacket. 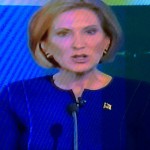 Ms. Fiorina has one of the highest scores this evneing.  Her bright blue color worked very well on the screen.  The vertical piping on her dress gave a great sense of proportion and focused the viewer on her face just as a suit jacket should.  The neckline was interesting while being tasteful with the zipped giving the viewer something other than a straight across line.

I was a fan of Gov. Kasich’s tie.  It was a visually interesting red with a good dimple and great proportions on his outfit as far as lapels, tie, and know went.  Unfortunately, he also suffered from a suit that was a little too big and also had the strangely foreshortened collars.  I would also recommend a lower button stance for him as I did for Gov. Bush. 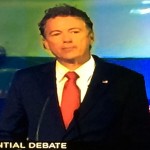 Gov. Paul had a tie that was a simple red with only slight bleeding.  He seemed to not have a dimple in his tie, but it was instead being lost in the tie itself and the angles of the television.  He had good proportions on his outfit but sifferend from the suit being too big again identifiable from the collar gap. 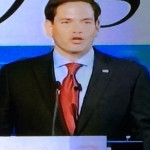 Sen. Rubio did a fantastic job this evening, though the picture doesn’t show it as well as I would like.  He had a dark red that set him apart form the other candidates that had a great dimple and very good proportions across his outfit.  His knot may have been just a little too wide for the outfit, but overall he did a fantastic sartorial job . 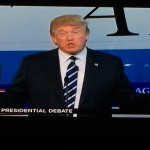 Mr. Trump got bonus points for using a classic repp tie (diagonally striped) with a very photogenic blue and white pattern.  He had good proportions across his outfit with the lapels, collar, and tie.  His know, however, was too small and it was getting lost against the white shirt and the suit.  The suit was also far too large in the shoulders, which was even more easy to detect because he did not button his jacket upon standing. 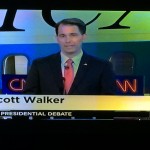 Gov. Walker got a solid B because, while not perfect, he had no major flaws either.  His tie was a respectable light red though the knot was a little small for his outfit.  HE also seems to have the same shirt buyer as the other candidates, purchasing a modern shorter collared shirt with a classic lapel suit.  His tie was also slightly wide in comparison to those lapels.

I’ll see if I can get some better options for Gov. Walker & Sen. Rubio before the end of the debate. That is two debates down for the GOP neck wear grades – do you want to keep seeing these grades when the GOP and ,eventually, Democratic Party nominees square off?