Welcome once again to Mixology Monday, the Online Monthly Cocktail party! This month, Stuart of Putney Farm has thrown out a theme of “Hometown Hooch” and so it is described as:

One of the best recent developments in the world of cocktails and spirits is the reemergence of regional, craft distillers. And we say “reemergence” because 100+ years ago, before the twin scourges of Prohibition and virtual monopolization “industrialization,” distilling was often a truly local endeavor. Not so long ago, if you wanted some booze, it was often made in your neighborhood and for the tastes of the locals. Sadly, for a few generations, that wasn’t the case… But, quite happily, those days are back… There are literally hundreds of local and regional distillers making some seriously tasty spirits… and now is the time for our monthly online cocktail party to send them some love.

Your quest is simple. Create a new cocktail, or refashion a classic, using your favorite “hometown hooch” (and we can expand the definition of “hooch” to include spirits, liqueurs, aperitifs and beer)… A little local flavor or history on your “hometown hooch” is very welcome..

If you’ve read my Mixology Monday posts before, you know that I will often use products from Rocktown Distillery.  In my mind, if I have the chance for a larger audience in a MxMO, I should use these local ingredients I enjoy.  In fact, previous MxMO posts that use Rocktown Distillery’s products are:

LXXVI – The Dragon of Summer

Turning to this challenge, I needed something a little different.  With apologies to David Wondrich, I am going to look at making a locavore Long Island Iced Tea. Mr. Wondrich had some good points in that linked article, including the idea behind drinks like a LIIT to hide not-so-great liquors and the use of cheap triple sec.  These matter to the story.

Rocktown Distillery was the first legal distillery to open in Arkansas after Prohibition.  It was a dream and a passion of Phil Brandon to do this and he made it happen.  The thing about distilling liquor – its a tricky and finicky thing.  Phil will be glad to admit that the first several batches of the Rocktown product were … lets just say not exceptional.  Mistakes were made, but more importantly Phil and the whole Rocktown crew learned from those mistakes!  That was five years ago and today, Rocktown has won some acclaim and awards for their products across the world – including producing the Best Microdistillery Whisky in the World for Jim Murray’s 2015 Whiskey Bible with the Single Barrel Reserve.

In the spirit of the LIIT and the growing pains Rocktown experienced, I look to the LR Iced Tea for this month’s MxMO.  LIke David Wondrich said, this was a drink meant to disguise the failures of the liquor involved, even if this time we have some higher quality ingredients. Look, I am located in the South – I know a little bit about sweet tea even if it isn’t my favorite drink.  We need sweet and because we are spiking this with alcohol, we need some citrus.  The classic LIIT recipe is getting a little tweak here.  Usually, you would use tequila, but since we don’t produce tequila in Arkansas, I am using an unaged Arkansas Lightning whiskey. Also, I am tweaking the ratio a little bit because Brandon loves juniper, so the gin here is more juniper forward than most gins you would use in a LIIT. 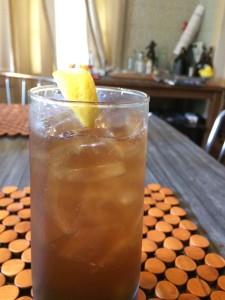 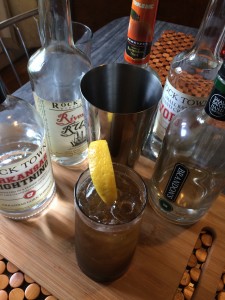 It tasted … fine.  This is a LIIT variation – lives were not changed.  Instead, what I can say is that the lemon and sweetness from the different components did a good job of melding the potentially disparate flavors of the liquors.  I had a little bit of a “twang” from the white dog whiskey and the back end had some juniper sneaking into the palate. Overall, though, it was a tangy, sweet, and slightly assertive drink that I think befits our MxMO! Sometimes, it takes a look at the past to see where to go in the future.  Rock Town Distillery took a rough start made one of the best whiskeys in the world a few years later.  A LIIT may not be inspiring, but the appealing tang can lead you to the world of sours and glory may follow. 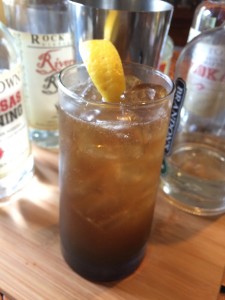