Welcome back to Mixology Monday, the long running internet cocktail party! If you have not made it by a MxMO before, a blogging host throws out a theme and all of us try to make a cocktail based on that theme.  OUr host then rounds them all up and gives us one place to look at all of them.  This month, Whitney of Tipicular Fixins is asking for our Drink of Shame.  As she puts it:

But, there was a time when you only ordered Long Island Iced Tea. Or, maybe you always made the Jello shots for your frat? Perhaps you’re the reason that your local had an Island Oasis machine for so long? Rye & Ginger? Vodka Seven? Someone was ordering these things. Your street cred would be ruined if you ordered or (gasp) served one now, but don’t you miss it, just a little?

Wouldn’t you love to have one more Jolly Rancher? A chance to drink a mudslide without shame? We all made questionable drink choices in our past, the popular drinks from 1970 to the year 2000 were a cheap, sugary mess. Now is the time to resurrect your favourite drink from the time before modern Mixology. Give a new life to the drink you had to put down after you had your first real cocktail.

This is the remix.

Maybe you need to use fresh ingredients, or you can try elevating the spirits. Make everything from scratch or remove an offending ingredient. Do whatever you can to bring back and legitimize a drink you used to love.

I’ll admit to a bit of quandary here.  I skipped a lot of the drinks of shame and fell into Gin & Tonics.  This rapidly was followed by Bombay Sapphire and Tonics as my gateway gin and the slow descent into the cocktalian you see today began.  I’ve already done a Gin & Tonic remix when I hosted MxMO-Highballs, so I needed to do something different.

Enter “Blue.” Blue is what we called a standby beverage in the college days.  It was, quite simply, an imprecisely measured combination of a blue-ish sports drink and whatever grain alcohol happened to be handy.  It was sweet, tangy, and just a little fruity.  Thank the heavens above there were not ubiquitous camera phones when I was in school. I thought I would take a stab at fixing up good ol’Blue for today.

This had me dig back into some tricks from previous MxMOs.  I made a blueberry simple syrup and used that for a blueberry sour mix, reminiscent of the agrodolce from Badges of Woe for MxMO-Blue.  I looked at the idea of a Pegu Club (what I affectionately call a gin margarita) and went from there.  I wanted to set this slightly akilter, as perfect balance wasn’t what I desired. I leaned more heavily towards the sour mix and cut the simple syrup to a 1:1 ration. As I approached the garnish, I realized that I needed to candy some blueberries, which is similar to the sriracha candied peppers from The Dragon of Summer in MxMO-Ice & Fire.  Nonetheless, refining some techniques gave way to a pretty tasty drink.  I started with a full 1.5oz of Bombay Sapphire gin to try to keep true to the strong history of the drink, but it was a little too alcoholic, so it was dialed back a touch.  Otherwise, we have a colorful and tangy beverage with enough sweetness to please a wide range of imbibers today. For a name, I had to play on “Blue” and give some comeuppance, so the Azure Avenger was named.  Yes, I know the drink looks a little more purple than blue; poetic license rules here. 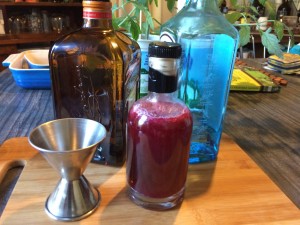 What I love about this drink is that is is assertively tangy, both from the gin and the sour mix.  The blueberries give great color and just a hint of sweetness.  Approaching summer, more and more citrus comes into play as the sunlight takes over, so I liked the bracing and refreshing nature of the cocktail In college, we were not so much worried about the flavor and balance, so I didn’t try to balance this too much. If you find the drink too tart to your liking, up the sugar in the simple syrup and make it richer instead of messing too much with the proportions. 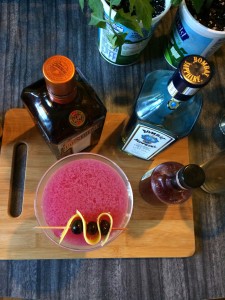