I love Manhattans. They are a fantastic drink with a simple ingredient list that makes it easy to experiment. It is a drink anybody can make at home.  That is probably why I have written more than once about them.

One of the biggest trends in cocktails the last several years has been to barrel age completed cocktails.  The same way that barrel aging adds depth and complexity to things like whiskey, it can impart an added level of complexity to a cocktail itself. Generally, if it is already aged, you want to tread carefully when further aging it as the character of the char and wood could get overpowering.  This means that the primary candidates for barrel aging are cocktails based on clear spirits – gin martinis, negronis, vodka something’s, light rum, blanco tequila, and the like.

I combined these two things with a little experiment in aging a bianco manhattan.  The ingredients I used were a white dog whiskey, or an unaged “moonshine” style whiskey, Bianco vermouth, the lesser knowing semi-sweet cousin of both dry and sweet vermouth often hiding in the back of the liquor store shelves, and a few dashes of grapefruit bitters.  Of the bitters that I had at home, the grapefruit bitters are clear and wouldn’t interfere with observing the color and I was hoping that the mellowing in the barrel would not be as heavy as the mellowing of the whiskeys. 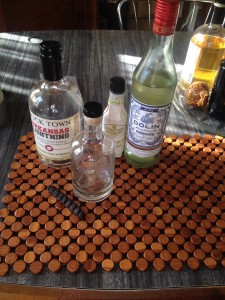 There are two methods to do home based barrel-aging – first you can buy a real honest to gosh charred oak barrel from where. You season it so that the barrel absorbs enough water to be water tight and let the beverage age for a month or more. Second – you get a sanitary container designed to fit charred oak staves that allow the aging to happen in a week because there is greater surface area open to the drink.

I was gifted the latter through bespoke post and when a weekend away was looming, I mixed together a bit of this pale Manhattan and left it to age while I was away. I did discover one little wrinkle in this methodologies – the pressure of adding just that charred oak stave to the liquid made it difficult to keep the bottle closed. Probably my fault for measuring too precisely how much liquid I could use. 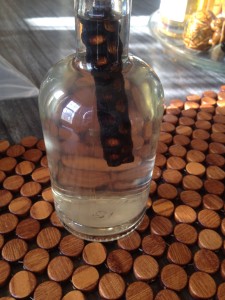 After 3 days in the aging process here is where we are: 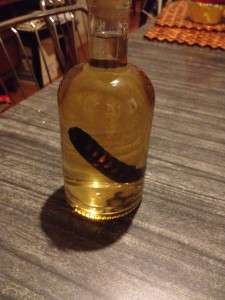 In just a few days, you can see the color change. Now this is something to garner some excitement. One of the biggest problems I see with barrel aged cocktails today is that there is one last step overlooked – the ice.  This needs to be stirred with ice to give it a little dilution that is necessary to make it all work out in the end. 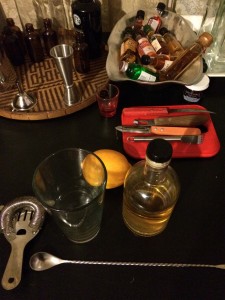 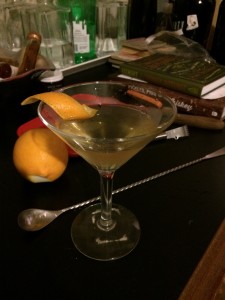 The drink was surprisingly clean in flavor.  The quick aging took just enough of the edge off the white dog whiskey while also cutting the sweetness of the vermouth down.  This is a singularly refreshing Manhattan that actually plays more like a martini on my tongue. There is enough oak in the flavor to taste the barrel, but it keeps it from being in the same flavor family as a fully aged whiskey. Instead, I get hints of vanilla, the smoke, and a slight tang coming through.This is a beautiful and dangerous drink. 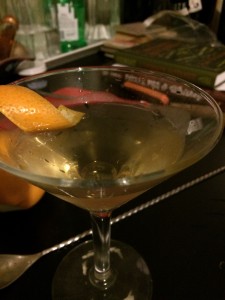 There you have it.  Barrel aged at home Manhattans with an Arkansas twist.  Now to figure out what my next aged drink might be ….