Welcome back, once again, for another installment of Mixology Monday, the Monthly online cocktail party!  This month, Andrea at Ginhound  is hosting with the theme of “blue.” As she describes in her announcement post :

January needs a bit of color – or perhaps the month after all the holiday mania makes you feel…..blue?

Either way this months Mixology Monday is a chance to live those emotions out.

You can dazzle us with a brilliant blue drink or you can share that blue feeling with a melancholic drink ?

Blue has been predicted as a new cocktail trend several times in recent years, and I have seen it on several menus, but more as a ironic statement than wholeheartedly love. I will say however that the Shark I had this October at PDT tasted like love to me.

But any mixer of blue drinks is faced with a bit of a dilemma as there is nothing “natural” about E133 – the most common of blue food colors: Do I really want to mix chemicals into my prefect mixture of fresh juices and good booze.

Feel free to interpret blue as freely as you wish – if natural is the way you want to go blueberries, violets, cornflower or red cabbage could be good ingredients to work with.

Me? I just started my homemade blue curacao – as seen in the photo above. And I am prepared to go all in with E133.

As I read this announcement, what seemed to speak to me was the “melancholic” phrase.  In classic Western Humours, melancholy was one one of the Four Humours that helped define humans and their personalities.  The four were sanguine, choleric, phlegmatic, and melancholic.  Each of these Four Humours was associated with one of the four classical elements as well – air, fire, water, and earth in that order.  I began to ponder the idea of an “earthy” cocktail to meet the melancholic idea of “blue”, as well as a way to incorporate the blue color without resorting to blue curacao.  In all fairness, I’ve used artificial coloring laden blue curacao before for The Dragon of Summer but this time, I thought I would do something a little bit different.

Arguably, the earthiest of spirits would be scotch whisky in all of its myriad forms. I happen to have the end of a bottle of Glenlivet 12 year sitting in the bar asking to be used. It also let me sneak in a Burn’s Night reference. I thought that using blueberries would be appropriate as well.  I decided to make a gastrique or agrodolce with the blueberries.  One loose translation of the Italian agrodolce is bittersweet (yes, I know sweet & sour is closer but bittersweet is more poetic for my purposes today).   Making the cocktail, though, would require an additional ingredient or two.  Sweet vermouth seemed to add something – the complexity of the vermouth would play off the strong flavors of the agrodolce and the scotch.

This is simply a sweetened vinegar based sauce designed to add sweet and sour elements to a dish.  The trick here is to control for the pectin in the blueberries so it doesn’t get too much like a vinegar jam.  We talked about pectin when we did the MxMO Preserves piece a while back.

As you cocktail types can see, this is pretty much just a 1:2 simple syrup with vinegar instead of water.  It’s that simple. I may have added a little balsamic vinegar to deepen the flavor.  Maybe.

What’s in a Name?

Now on to the name – Badges of Woe.  I mentioned the Four Humours above when talking about the earthiness idea in the cocktail.  The Four Humours are also reflected in literature over numerous places.  One of my favorite Shakespearean Sonnets is Sonnet 45 that deals with Air & Fire (Sanguine and Choleric humours if you are keeping score).  The “earth” part is handled in Sonnet 44 which reads:

If the dull substance of my flesh were thought,

Injurious distance should not stop my way;

For then despite of space I would be brought,

From limits far remote where thou dost stay.

No matter then although my foot did stand

Upon the farthest earth removed from thee;

For nimble thought can jump both sea and land

As soon as think the place where he would be.

But ah! thought kills me that I am not thought,

To leap large lengths of miles when thou art gone,

But that so much of earth and water wrought

I must attend time’s leisure with my moan,

Receiving nought by elements so slow

Heavy Tears was also in the running, but I may save that for a different drink. Here, Shakespeare speaks of the longing and sadness of a love separated with the slower elements, water and earth(Phlegmatic and Melancholic if you are keeping score), bearing the pain and distance.  The heavy tears, badges of woe, signifying the melancholy loss of his love’s presence. 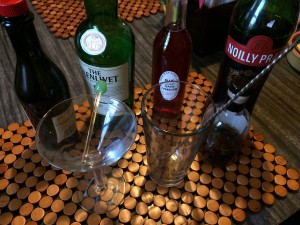 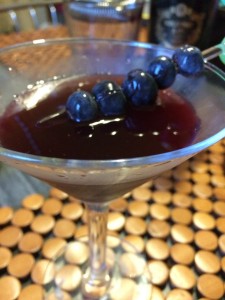 It has a tart nose from the vinegar sitting there with a hint of herbal notes from the basil.  On the tongue, the disconcerting combination of a tart and tangy scotch comes through.  The scotch lends its earthy power and smoky backbone to the drink while the sweetness of the blueberry and that particular flavor comes to the front.  The tangy vinegary flavor blends into the herbaceousness of the sweet vermouth leaving a refreshing scotch cocktail that still lingers on the palate like those heavy tears. 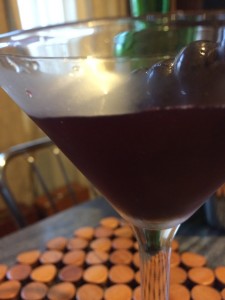