It is time again to revisit the land of Mixology Monday, the monthly online cocktail party.  Every month, a different blog hosts, lays out the theme, and lets the rest of us post our interpretations of this theme.  This event has been going on for nearly 90 months under the stewardship of, originally, Paul Clarke at the Cocktail Chronicles, and, now, Fred Yarm at Cocktail Virgin.

Chris over at A Bar Above challenged us with the theme of The Unknown .  As much as I would have loved to get a Heart of Darkness, Mr. Kurtz style reference going on here, it wasn’t quite so directional.  Instead, as Chris described:

Ok, ok… It’s not quite as dramatic as I make it out to be.

Basically the idea is to try something new, an ingredient or technique that you’ve never had experience with before and create a cocktail around it.

Use a spirit that you’ve never used before. It could be a base spirit, modifier or that Belgian Ale that rings in at 15% alcohol. Use an ingredient that has always captured your imagination in the supermarket. Maybe that weird looking fruit that you always walk by at Whole Foods, or that unusual looking vegetable that you can’t even pronounce. [or] Use a new technique that you’ve never tried, but have always wanted to. Have you been dying to make your own vermouth, amaro, or martini glass made completely out of flavored sugar.

I made some mutterings on Twitter about how this was a tough theme for me.  I mean, since I finally bit the bullet and actually started submitted Mixology Monday posts, I have been challenging myself to do things I hadn’t done or used.  For example – I finally made my own gin for the Highball post (hosted by the best MxMO host ever Southern Ash), I used vodka to highlight nocino in Aw, Nuts (hosted by Elana at Stir & Strain), and I still am living in the shadow of the candied sriracha pepper garnish from Fire! (And Ice) MxMO (Hosted by Muse of Doom). Also, fall can be an exceedingly busy time of year for me so I was a bit out of sorts of ideas. What would stretch my world into the Unknown?

As much as I love vermouth, I don’t use a lot of wine in my mixing.  If I open a bottle of wine, I intend to drink it for its own pleasure and use it in the cooking going on, such as a nice white for the pasta with clam sauce. One of my stalwart Tweeps and all around fantastic gal, the Muse of Doom, mentioned wine as a possibility. Okay.  What else could I do?  Don’t ask me how or why, but celeriac came into my head.  Celeriac, also called Celery Root, is the subterranean tuber of the celery stalks we are familiar with as garnish in a bloody mary.  Considering wine’s often nuanced flavors, maybe returning to a vegetable could be fun.  [Time to drag the juicer back out; last seen in the Southern Ash cocktail world for The Sanguinary in “Drink Your Vegetables” Mixology Monday (Hosted by Fogged in Lounge)] 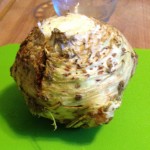 Above is the celeriac before trimming it; chopping it into pieces; and juicing the everloving pulp out of it. Below is the cloudy juice that the entire celeriac produced in one party-sized cooler glass. 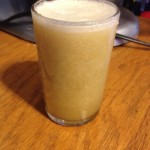 Tasting the juice itself, it certainly has celery flavor but I also detect … nuts? Okay.  Now for our next ingredients. 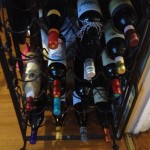 Okay.  White wine from the “cellar.” I may have slacked on replenishing our wine rack lately, so I am lacking the pinot grigio that I first thought would match well.  Instead, I’ll open up a bottle of California Sauvignon Blanc.  .

As for our base liquor, going with blanco tequila to play up the vegetal flavors from the celeriac and wine at the same time.

To temper the flavors a bit, we need something to harmonize and something to counteract all of our minerally and earthy flavors going on.  A little cointreau and a squeeze of lime? Now I am thinking about Margaritas.  Why not turn this into a celery and white wine margarita?  I’ve done margarita variations before. (To be honest, the Margarita is such a basic cocktail that we have all done riffs off of it, even as it is just a riff off of a classic sour). Okay.  Basic plan for the celeriac Margarita:

Note: Okay, I kept my celeriac syrup looser for a reason – I didn’t want as much sweetness instead trying to bring out the vegetal qualities of both the celeriac and the wine so too much sugar or too rich a syrup would have interfered.  This is also why I kept the citrus component in check to create a syrup base.  After I thought this up, and was midway through the production of the components, I realized it is similar to Alton Brown’s Celery Soda recipe from the old Good Eats episode. AB is my spirit animal. 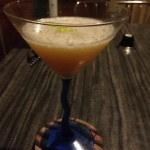 How does the drink taste?  Refreshing and complex.  It certainly makes you pause to take win the unusual flavors and the way that they play together.  Specifically, the celery flavor hits early on in the drink but then fades into the sweetness of the syrup.  The wine’s dry quality starts to come out towards the tail with just a little of the spicy tequila character. Every sip I took left me feeling a little more comfortable with the way the different herbal and vegetal flavors were playing together.  It was crisp, but not sour, and provided a refreshing change of pace to the usually citrus heavy cocktails I drink.

As far as names, we are saying goodbye to summer here and welcoming the chill crisp air of fall.  In honor of both the summer semiotics of the margarita and the earthiness of the celeriac juice, I went with The Last Kiss of Summer.

Oh, I served it with a salad of romaine, red bell peppers, jalapenos, blue berries, quick-pickled carrots, and of course celery topped with a few ounces of griddled chicken. 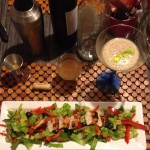