She put the lime in the coconut, she drank them both up

Once again we travel into the depths of Mixology Monday, the monthly online cocktail party. This month, our host JFL at Rated R Cocktails has devised the theme of coconut. As he describes it:

Ah the Coconut, so round, so firm, so fully packed…with flavor. You know back in March I seem to remember going on a regular madcap romance with this tropical icon.In fact I think I used coconut in just about every form I could. After all that you’d think I’d have had enough, and you’d be dead wrong. Coconut is versatile, coconut is magical, not only is it edible but it can be made into scores of products. However this month you need only concern yourself with the liquid variety as I unveil MxMo Coconut.

Yes friends it is my sincere belief the coconut does not get the love, nay the respect it so richly deserves. Because this easy going tropical seed had it’s heyday in the Tiki era it’s happily associated with the same fun loving drinks. In fact this ingredient is well within the Tiki wheelhouse yours truly occupies. Despite all the great Tiki drinks coconut appear in most people are down on the humble seed because of the Pina Colada. Friends this need not be so, I say we take this delicious ingredient and show it can yield a tasty, well balanced cocktail. It doesn’t have to be tropical necessarily. I’d really love to see some of my friends more classically minded come up with a cocktail more befitting a pre-prohibition mindset.

Okay … I have two problems this month.  First, I had problems remembering to check for the announcement so I missed some time. I am no stranger to the time crunch that can come from Mixology Monday, but instead my bigger problem is the second issue – I don’t like coconut!

We all have a flavor or two that just doesn’t agree with us, and for me coconut happens to be a flavor I just cannot stomach. This left me with a quandary because I do try to take part in Mixology Monday regularly.  What could I do? I immediately dismissed all the uses of coconut cream and the thick, gooey, highly flavored coconut products.  My mind instead landed on coconut water.  It seems that coconut water has lately been in high demand in the health conscious portions of our society. I was confident that I could find a bottle at my local mega-mart without too much trouble. Now that my vector of coconut was determined, the next step was concocting a drink.  JFL made mention of coconut’s importance in tiki drinks …. hurm. I have some mango rum leftover from my previous Mai Tai work. (Yes, I know … I should make that a post)  The next step would be how to combine these ingredients.

My pop culture loving self decided that limes had to be involved, because you put the lime in the coconut and drink it all up.  Booze, lime, flavoring agent was leading me towards the Margarita or Pegu Club as my base cocktail. A dash or two of bitters would inevitably come into play, but for my added flavor accent I wanted to add something on the bitter side – we already had sweet, fruity, and acid.  Or maybe spicy …. perhaps I can split the rum with tequila to find balance I seek!

Observe Placido Flamingo in the background

Yes, the ratio is a little inverted from the usual margarita recipe where 3 parts booze instead of the above 2 parts booze.  I thought I would try to highlight the coconut a little more to meet the MxMO theme. 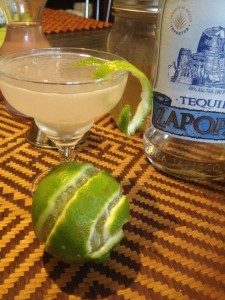 The most important thing I have to say is that coconut water does not have the distinct coconut funk that I despise! This drink was easier than I expected because the coconut water has a mellow funk to it, a certain light and crisp way of filling out your mouth with a hint of that distinctive tropical tone.

As for Nilsson’s Folly itself, I think cutting the Grapefruit bitters is the way to go and upping the rum just a tiny bit.  The first batch was overwhelmed by the citrus because I had not expected the coconut water to be as mild as it turned out to be.  Splitting the tequila and the rum definitely was a winning choice to add just a hint of sweetness from the rum and the backbone from the tequila.

I found it amazingly refreshing, though that is not too much of a shock since the Pegu Club was derived for a rather hot climate. The most distinctive part of the cocktail is almost indistinct.  There is a background interest in the drink.  I can pick out the rum, the tequila, the citrus easily, and then something plays across the tongue like an evanescing fog that makes you want to take another sip.  You want to hunt down this mysterious player who bedevils you.  It is the coconut water, or more to the point it has to be the coconut water because I can pick out how the rest of these flavors play together.  I may just have to play around with coconut water more before the summer leaves us.