It is once again time for Mixology Monday, the monthly online cocktail party.  I missed last month with a busy schedule and didn’t get in a pineapple drink, so I really wanted to get back in the swing of things this month. Our host, Stacy, described the theme “Smashes” as follows:

I’m proud to announce that July’s theme is all about the Smash, those ice-laden, refreshing concoctions designed to celebrate my favorite things about life: stiff drinks and warm weather. It’s no surprise that in 1862 Jerry Thomas was the first to declare that “the Smash is simply a julep on a small plan.” The drink originally gets its name from the way mint was smashed up in the shaking process. Fast forward twenty-five or so years later to 1888 and barman Harry Johnson addresses the Smash as a separate cocktail from the julep entirely and expands the components to include “fruits in season.” What little was originally written about the Smash can lead most to believe it wasn’t a terribly popular beverage, but that couldn’t be further from the truth. According to David Wondrich, the author of Imbibe!

“From it’s first appearance in the mid 1840′s until after the Civil War, the Smash was just about the most popular thing going. In the 1850′s, at the height of the Smash’s popularity, all the “pert young men, ” the Broadway dandies, San Francisco swells, and junior New Orleans grandissimes, seemed to spend the warm months of the year with a Smash glued to one hand and a “segar” to the other. In fact, the Smash rather became an icon of dissipation”

Johnson’s smashes truly resemble many modern interpretations. With that said, the basic elements of the drink have remained the same over the years: they always include a spirit base, ice, fresh herbs (most popular is mint), sugar, seasonal fruit, and a little bit of water. Let’s get ultra creative, smash things, and then drown them in alcohol and ice. Allow your creativity take flight and concoct sweet and/or savory combos to remember using any fruit or herbs you can get your hands on.

Okay … smashes it is! Originally, I was going to use a chunk of this open bottle of rum sitting in my bar.  I went to the local farmers’ market on Saturday and started looking around for ingredients.  This was not a good week for fruit.  Either I got there too late or I was between all the harvestings but there was scant available outside of peaches.  When I was talking about this with Monica Mylonas, co-owner of Mylo Coffee Co. and all around awesome person, she said “Can you stretch the definition of seasonal fruit because we have so many beautiful tomatoes out here today?”

This is Mixology Monday, of course I can stretch the definitions!  The bloody mary is an all time favorite cocktail across the world so incorporating tomato and savory isn’t that crazy.  Right? Time to construct a smash.  Tomatoes and basil are the easy parts of this cocktail.  Then, when I was thinking about my marinara sauce, I realized that I wanted to play up some herbal notes so the bottle of dry vermouth came out.  Vodka or gin?  That was the question until I recalled a sealed off bottle in the back of the bar from a previous experiment – garlic vodka!

Step 1: Rough chop the tomato before putting it and the basil in the shaker

Step 4: Double strain into a highball or cooler glass packed with shaved or chopped ice.

Step 5: Garnish with a sprig of lightly slapped basil & a sprinkling of herbed finishing salt. 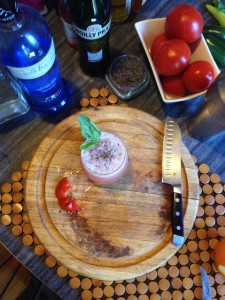 My first result had me scale back the garlic vodka.  I had forgotten just how strong I made that stuff.  Once back to a mere .25oz, everything started to sing.  It was remarkably refreshing.  The tomato flavor in a drink plays just as well with basil as you would expect in a sauce.  The vermouth rounded out the edges of the garlic and provided a hint of interest with each sip as the flavors unfolded.  While by no means a sweet cocktail nor a bitter cocktail, it was light and refreshing with the herbed salt adding that little trick to get you to drink even more sip after sip. On the nose, the garlic came through but the herbed salt kept it from being too punchy. 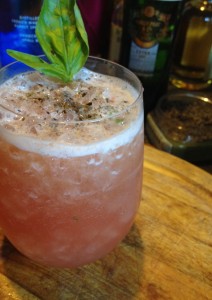 I must admit that I am surprised and impressed with how well this one came out.  Back to your regularly scheduled Mixology Monday musings!