It is time once again for Mixology Monday, the monthly online cocktail party.  This month, Scott, at Shake, Strain, and Sip, provides the theme of temperance.  As Scott describes:

While many of us today think of overly sweet and unimaginative uses of fruit juice combinations when we hear of nonalcoholic beverages, there is a growing resurgence and movement of creating real craft “mocktails” in cocktail bars around the world… As such, this month’s theme challenges you to create unique craft “mocktails” only limited by your imagination. Perhaps you have an abundance of that homemade lavender syrup sitting in your fridge? Maybe you’ve been thinking about creating a non-alcoholic version of your favorite cocktail. Or maybe you just wanted an excuse to mix up an Angostura Phosphate you saw in Imbibe. Oh yes, non-potable bitters are fair game here since they are legally classified as nonalcoholic in the states. However, if the Teetotalist inside of you won’t allow it, you can go without them. Cheers!

I’ve actually been thinking a lot about this sort of theme lately.  If you can only mix delicious beverages using alcohol, you are missing part of the equation.  What happens when, at the next cocktail party you through together, you are approached by:

Something more than a Shirley Temple is certainly warranted in this day and age.  In that light, I’m going to give you three options, a triple play of temperance if you will, for this Month’s Mixology Monday. A few quick points at the front end – I had to really pay attention to sweetness in these drinks.  Fruit juices are inherently sweet and without the use of alcohol to temper that, the balance takes more effort.  I went with a complete teetotaling option for the drinks to be open to the widest possible group of people.  I included caffeine in this prohibition for a similar reason; I may live on coffee as my lifeblood but there are those who either don’t or can’t consume it. I looked at existing cocktails, and particularly Mixology Monday cocktails, to craft some of the ideas below.

I actually had come up with this cocktail just before the MxMO theme was announced, so I am glad to use it here.  Remember the black and blueberry freezer jam that I made for last month’s MxMO, Preserves?  I had some left and decided to use it for a cocktail.  Even though I cut back on the amount of sugar in the jam, it is still fairly sweet.  Working from the same idea as the margarita that inspired the Michaelmas Wink, I added the juice of half a lemon.  Once shaken in the usual manner and double strained into a glass, I topped it with honey-ginger soda fresh from Loblolly Creamery and garnished with a lemon spiral. 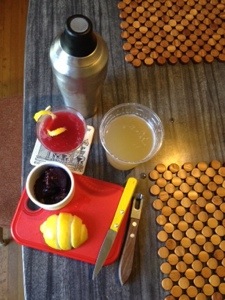 Step 1: Peel a spiral from the lemon with your channel knife and cut the lemon in half.

Step 2: Place 1 Tablespoon of Jam into a cocktail shaker.  Fill the shaker one half with ice and squeeze the juice of half a lemon into the shaker.

Step 4:  Double strain into a cocktail glass or flute.

Step 5: Top with Ginger Ale and garnish with lemon spiral.

The Loblolly soda really shone here.  There was a pleasant tartness from the lemon juice and a whisper of the berry flavor came through as well as the beautiful color.  The soda, with its honey and ginger, provided the spice and secondary sweetness to let this drink shine.  It does tend to clog the shaker with the jam, but all in all well worth it.

I love gin and tonics.  To me, they are a quintessential summer beverage.  For a temperance play on a gin and tonic, I made “gin” syrup.  Digging into my bag of tricks from theMxMO Highballs, I pulled out the spice stores that were used when making my gin.  I scaled the recipe back to be worthy of a single 250ml production value while adjusting for a higher citrus content and lower juniper content from my experiences with my previous bottles. The ingredients were added, along with the sugar, to the water.  Simple Syrup was made and strained, but it was important to keep this to a 1:1 syrup, with a lower viscosity than the frequent 2:1 syrups or gomme syrups.  I know that those amounts look miniscule, but for one cup of syrup, okay a little over a cup as one cup of water will expand with dissolved sugars to closer to 325ml than 240ml, you don’t need much. 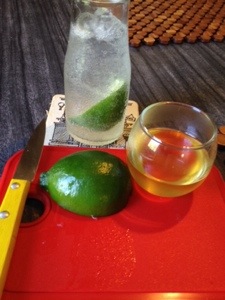 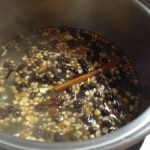 Step 1: Place all the ingredients (except the tonic water and lime) in a small pot and place over medium-high heat.

Step 2: Allow mixture to come to a boil and reduce heat to medium-low.

Step 4: Cool and bottle your Ginned Up syrup.

Step 6: Squeeze one quarter of a lime into the glass.

Step 7: Top with tonic water, give a few quick stirs. Garnish with a quarter of the (nigh priceless) lime.

A little sweet, which is not a surprise considering the ginned up syrup we used. The spice of the syrup really comes through and cuts the bitterness of the quinine. It is complex and refreshing – all the best traits of a good gin and tonic but without the alcohol.

Finally, Derek had an excellent post about making smoked ice for cocktails … and happened to have some lying around.  I asked nicely for them instead of trying to fire up my grill and make smoked ice myself.  Building a mocktail around the hint of smoke could be challenging but again we go back to what is going to complement and not compete.  I decided to take the risk of (decaffeinated) green tea.  I brewed it rather strongly and proceeded to make a bitter, smoky, sweet, and sour combination akin to an Old Fashioned. 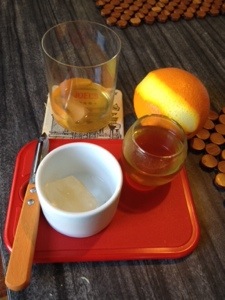 The smoke from the ice was clearly on the nose when you raise the glass.  It was not bitter, but it was a bit astringent from the strong green tea that I used.  Something wasn’t quite right though, so I replaced the standard simple syrup with the Ginned Up syrup.  That was a revelation.  The smoke and spices play up the flavor of the tea while the citrus notes in the syrup bring the orange from the background.  The New Fangled is something that I will count as a success. 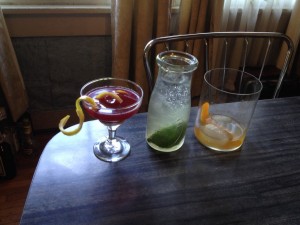