The terrazza is an apertif that I created for a dinner party in November.  It is the result of planning going awry and having to scramble to make it make sense but it came out wonderfully.  I’ll show you the thought process of how these things all come together. My apologies for taking nearly 3 months to get this short and sweet of a post together on it.,

When my wife and I were invited to a dinner party and told not to cook anything I knew that I would devise and bring an apertif.  For whatever reason, the Bronx Terrace cocktail caught my eyes. It probably had to do with using gin (a liquor I still attempt to convert people to) and because I had not worked with it before. 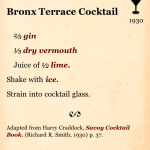 I thought about using Lillet Blanc instead of the standard vermouth because … well … I hadn’t used any Lillet in a while.  The ratios looked good, in my head the Lillet would match the flavors well.  If the first one came out too tart, I could easily dial back the amount of lime juice I was using.  I grabbed Bombay Sapphire gin to highlight the citrus and play down the juniper and anise flavors compared to London Dry Gins. I then realized that I was out of Lillet.  Oh well, I’ll grab some on the way.

Running behind for the dinner party and coordinating with my wife, I decided not to go the liquor store that always has what I am looking for, Colonial Wine & Spirits, because it was further out and took more time than I planned.  What happened instead was a jaunt through 4 other closer liquor stores, none of which had any in stock.  One that I had purchased Lillet from before thought there were two showing in the computer stock but couldn’t seem to locate it in the back.  Finally, needing to do something, I saw Aperol on the shelf of my final failure to locate Lillet.

Aperol is from the same family as my beloved Campari.  It is a bitter Italian liqueur, often referred to as an amaro.  Aperol shares a citrus flavor with Campari but is fruitier and lighter in alcohol than its more deeply hued sibling.  Aperol it was!

The drink was renamed to The Terrazzo, sticking with my riff on the Bronx Terrace, and Aperol subbed in for the vermouth component.

As you can see from the picture, this is a pretty straight forward recipe. I used 1 ounce of Gin to half an ounce of Aperol.  I squeezed half a lime into the shaker and let rip.  Because we are using the lime juice, it is best to shake this cocktail to incorporate the citrus effectively. 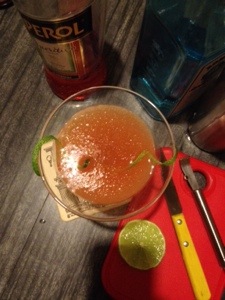 Refreshing and delightful as a pre-dinner cocktail. The Aperol contained enough sweetness to soften the tartness of the lime while the citrus notes of the Sapphire made sure that Aperol’s orange flavor came through. More importantly, everyone who had one enjoyed it. (At least to my face). 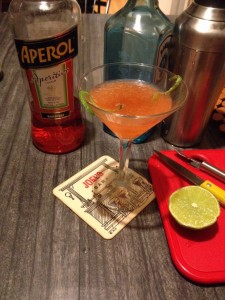