It is time once again for Mixology Monday, the online cocktail party happening for better than the past five years! Actually, I am a little late to the party this month.  You see, there was travel involved and airlines that didn’t quite have the ability to get me back on time to make a cocktail by the deadline yesterday.  Still, I am going to give it a go here!

As described by our host this month, Craig from A World of Drinks,

For this month’s challenge I would like to take us back to the humble beginnings of the cocktail bar, the days when bartenders didn’t have the luxury of daily deliveries of ingredients from around the world. In these times bartenders would have been uncertain when they would again have the privilege to work with special ingredients so would naturally try to make the most of them… Such methods of preservation such as syrups and preserves have been staple ingredients behind the bar ever since, while others such as shrubs and sherbets were relatively short lived. The aim of the challenge is to go back to the days of the preserve, pick an ingredient, seasonal or not and treat it as if you won’t be seeing it again for quite some time. Syrups, sorbets, jam, shrubs and the like are all fair game, anything that will preserve the integral character of your favourite ingredient.

I will admit it – Preservation theme threw me for a bit of a loop this month.  Real life (aka non Internet life) can be tough enough without trying to figure out how to make a good cocktail with this theme.  I took this challenge to mean that I needed to make a preserved ingredient to use.  I decided that some berry jam would be a good idea, but  not being a big canning person, and short on time, I opted for freezer jam.  As I thought about what to make, I knew that faux Moroccan preserved lemons would be the other preserved component I would try to use.

For a look at how I made these two ingredients check out this Related Blog Post.

My usual method of Mixology Monday is to start with a classic cocktail, for proportions and basic ingredients, and then start seeing where that thought experiment takes me.  I decided to return to the well of the Margarita, stretching the sour theme from last month as well.  WIth the jam I made, the sugar content should be sufficient without simple syrup.  Debating between tequila and mezcal started but then I realized that if I am playing up the berries and saved citrus, the smokey flavors of the mezcal would work against my intent here. 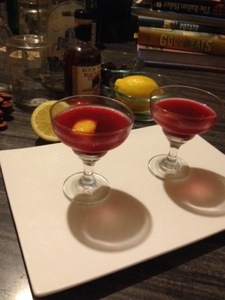 The garnish is a fake Moroccan preserved lemon peel.  I didn’t have three weeks for the salt to desiccate them so I just added extra salt and lemon juice to intensify the flavor.  Scraping off the flesh left me with a lemon peel full of citrus and salt to float right in the middle of the drink for a color component and a little saltiness to counteract all the sweetness.

Step 2) Shake the everloving beejeesus out of it so the jam breaks down.

At my first attempt, I used 15ml of the blackberry cobbler liqueur, but the flavor was off with just a bit too much sweetness.  I cut back on the liqueur the next round and it turned out nicely.

The berry flavor comes out nicely with just a hint of the tequila’s spice bringing out the sweetness.  The biggest surprise was the preserved lemon peel.  I know I faked the preserved lemon method, but the peel had turned supple and more easily pliable in less than a week.  The fragrance from the lemon juice and salt preserved peel really brought the drink to life on the palate.

Oh, yeah! A name! Berry jam preserved margarita doesn’t seem to work.  It is too long. A  Blackberry is not supposed to be picked after Michaelmas, else you steal the Devil’s Due.  Let’s go with the Michaelmas Wink.