This month, Southern Ash is hosting Mixology Monday, which means that I got to pick the theme. The theme is highballs, loosely defined as an iced tall drink with a liquor and a mixer, and maybe a garnish.  One of the challenges here is to create a compelling blog post with so simple and unassuming a recipe.  My hope is that it spurs stories and personal connections to be revealed in the posts that are as much about bar culture as about the cocktail itself.

In that vein, indulge with me for a moment on why I made the gin and tonic that I did.  Years ago, I had only a passing familiarity with cocktails and liquor.  Sure, I had it, but it never was a big deal to me.  Life was just rolling on and I was gravitating more towards wine anyway. One night, in 2002, I believe, there was a revelation.  That revelation was a Bombay Sapphire Gin and Tonic.  I had always like gin and tonics well enough, nicely balanced, tart enough I wasn’t really able to throw them back too quickly as a young man, but this was something different.  I tasted different flavors and notes.  I experienced more citrus than I had before.  I became enamored with how this changed my drink.  Bombay Sapphire was my gateway gin. 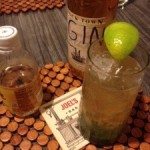 By 2005, I was slowly growing my cocktail and liquor knowledge.  I had begun amassing a home bar and was collecting books and blogs to read.  When I feel the need to learn something, the first thing I do is go reading.  Once I feel like I have a handle on things, I can start experimenting.  One book that I got my hands on was Anthony Dias Blue’s Complete Book of Spirits.  This was a great reference to get my head around the basic differences in spirit categories as well as what was out there. In the chapter on Gin, still to this day my “most equal among equals” liquor, he described the cold compounding process and gave a recipe to make an industrial amount of bathtub gin.

One of my favorite blogs in this era was Jeffrey Morganthaler’s exploration of cocktails and science.  His posts remain to this day brilliant.  He also had come across the same pages in the same book.  He, however, was not full of the fear that I was.  He made the gin. So now, over 7 years later I am returning to a promise I made to myself that I would make my own gin to come full circle with highball that opened my eyes to the potential wonders of cocktails and spirits. He also explained how to make your own tonic water, but I was not that ambitious this time around.

I will put up my own pictures and how I changed the recipe below, but if you have never read Jeffrey’s piece, you should do that now.  I followed the same methodology with variations in my actual mix of spices for infusion and in the end strength.  It really is this easy guys and gals.  Without further ado, how I made my gin for this month’s Mixology Monday. 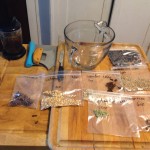 This is a slight variation on what Mr. Morganthaler posted.  I upped the juniper a bit because I really like the flavor.  To balance that, I increased the lemon peel and added the star anise.  I wanted to use grains of paradise, but they were not readily available so instead I went with a few grams of cloves. 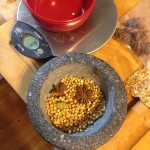 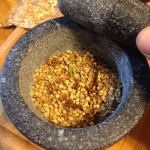 I muddled the star anise, cloves, and coriander.  The cardamom pod was crushed.  These ingredients were then deposited into a glass container and the gin was added. 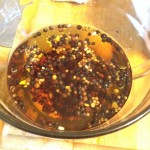 One week later, it was time to strain.  First, I used a regular strainer to remove the solid chunks and ingredients.  Then, following Mr. Morganthaler’s lead, I got a filtration pitcher and let the gin slowly work its way through.  This was repeated a few times until I was pleased with the result.   The gin was then cut with 80 proof vodka.  Finally, between the ingredients absorbing vodka and a bit of spillage, I added approximately 90ml of water to each bottle.  By my math this left me with a 79 Proof homemade cold infusion gin.

The resulting highball was 2 ounces of DiPippa Gin to 3 Ounces of tonic water with a wedge of lime squeezed in for garnish and the last bit of flavor.  I was extremely pleased with how this turned out.  Unsurprisingly, the juniper is very forward on this drink.  The spice, however, cuts through that an instant after you take a refreshing sip.  It had a medicinal quality about it, but in a good way that London Dry Gins can. It was a very clean flavor and it certainly made me smile. All in all, I am grateful to Mixology Monday for letting me host here at Southern Ash and finally fulfill a promise I made to myself years ago to make my own gin. 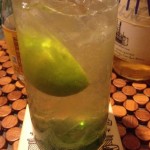 Look for the MxMO Roundup post around January 27th or 28th.