I am returning to the Mixology Monday fold after a few months off because, well, November and October are probably the busiest months of my year.  It was rather stressful.  This month, we get a broad flavor to play with in MxMO – Anise!

Here is the description of the the theme from Nick at The Straight Up:

While I had a few ideas I’ve been kicking around for this months theme, including some more holidayesque thoughts (candy cane vodka?), I ultimately decided on one of my favorite flavors: anise.

Although great any time of year, there is something about colder weather and the holidays that really sets my anise fetish into overdrive. While past MxMos have seen a few specific sources of anise, such as pastis and absinthe, I wanted to open things up to anything anise flavored, the more unique the better.

Most folks have something with anise notes laying around, whether it’s Absinthe or Pastis, Ouzo, Genepy, even Green Chartreuse,Peychaud’s, Raki, etc.

Maybe get creative and make something tasty with some star anise, like a syrup, infusion or tincture.  Show us that riff on a sazerac orimproved holland gin cocktail that you love, or create something entirely new.  If you’re feeling frisky, see if you can work in a few anise ingredients. Either way throw something together and share it with us all. The deadline is two weeks from today, monday 12/23.

You know, the sazerac method seems to be a successful way of constructing cocktails.  Take your base liquor and a few accents, mix it together while coating your serving glass with something else, strain your now lightly chilled beverage into the coated serving glass.  The Capital Bar and Grill did a great riff on this methodology when Spencer came up with the Southern Comfortable as an example. I’ll play with that basic methodology, but invert the flavor profiles so the anise is in the main liquor instead of the accents.

I like Ouzo, so we will work with that as our Main liquor.  I have the remnants of a bottle of Metaxa Ouzo which is a fairly common ouzo to find.  After we look at that, let’s add some sweetness and brightness to it by highlighting with the Arkansas Lightning Apple Pie and Cointreau.  I want to use the different fruit components to act in concert on the anise flavors for a more complex final result. Finally, lets put orange bitters to taste into our main component.

The serving glass is coated in Aperol, because I got a bottle and it is one of those bartender’s candy ingredients where you just look for reasons to use it.  The orange notes and slight bitterness on the nose of the drink should be pleasing and heighten the orange from the Cointreau without making it too sweet.

Finally, the garnish is a beautiful piece of star anise because it not only plays to the theme, but plays to the holiday season as well.

Naming a cocktail is always difficult.  We are looking at Greek (Ouzo) and Italian (Aperol) components for the most part here, with the star anise garnish coming in as a good trading route doff of the hat.  The Cointreau is French and the Apple Pie American, but they don’t speak to me while I am trying to name this drink. Italy and Greece share the Ionian Sea.  Could go with Ionian strait, but that doesn’t seem quite right for this cocktail.

Calypso Deep! The deepest part of the Mediterranean is in the Ionian Sea between Greece and Italy! Since this is far more ouzo than Aperol, it is fitting that the Calypso Deep is also closer to the Greek shores than Italian.  Haha! We have found the name.

Without a doubt, the Calypso Deep presents anise flavors up front. The ouzo provides a smooth, almost licorice flavor as soon as the drink hits your tongue.  The slight smell of orange from the Aperol rinse and the star anise mean that I pick up the dry orange flavor from the Cointreau next. In the middle of the drink, the Apple Pie give its a sweetness that counteracts ouzo’s sometimes rough second stage of anise flavors.  The sweetness tempers the drink, but it is not a sweet drink at all. I think this is a successful look at anise and let me visit the new spice shop in town for the beautiful star anise garnish. 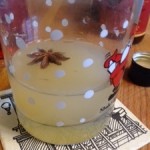 Step 3. Empty tumbler and add Aperol.  Turn the glass to coat the insides with it, discard any extra.

Step 4. Strain the drink into the Aperol rinsed tumbler and add the Star Anise garnish. 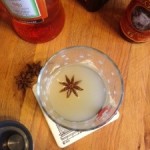