Once a month, the cocktail blogosphere gets together for a party called Mixology Monday, hosted by a different blog and with a different theme.

This month Elana, of Stir & Strain, has posted the theme “Smoke”! As she describes it,

Hot on the heels of August’s theme of Fire, this month’s Mixology Monday is its oft-time companion and huckleberry friend: Smoke.

They say where there’s smoke, there’s fire– it isn’t necessarily true if we’re down to the smoldering embers, but, well, they say it anyway. In our case, where there was fire, now there’s smoke, and it’s time to stoke your enthusiasm for the next challenge.

Smoke has been everywhere this past year, from liquors to lemonades, to the hills here in Southern California(!); smoke in its many forms has been front page news.

For me, smoke is also a transitional element: it symbolizes the last summer bonfires, sitting around the fire pit making s’mores, and the start of the fragrant crackles from the fireplace announcing that fall is coming.

For September’s theme, I’d like to see how you interpret smoke. With your liquor or ingredients? Your glassware? Will you whip out a chemistry set to transform your cocktail into ghostly vapors? Do you own a home smoker, still in the box, that’s never been used? Well then, you’re welcome. Unpack those ideas and let’s set off a couple smoke alarms this month for MxMo.

So what was I to do?  On Twitter, there were ideas flowing left and right! Maybe I could work on fat-washing whisky with some barbecued pork. Little Rock’s own Rocktown Distillery offers a Hickory Smoked Whiskey.  What to do, what to do?

I decided to incorporate smoke two ways.  Then a third was added Sunday morning. I started thinking about the bottle of mezcal sitting the bar.  Mezcal is related to tequila as a product of the agave plant, but has a character all its own. It is known for a smokey nose and even more assertive glavor than tequila, more earthy than tequila’s herbal notes. Good start. 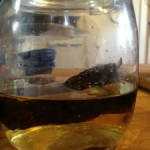 Then, my lovely wife while shopping at the farmer’s market called and said they had freshly smoked sweet peppers.  A-HA! Shortly, I was doing another infusion for Mixology Monday.  Instead of a sharp heat, like last month, this month was all about rounding out and deepening flavors.  I only meant to let the pepper sit in the mezcal for a few hours, but 8 hours later I remembered that I needed to take it out.

My other idea for smoke was to work with smoke-rinsing a glass.  I have a rosemary bush out front and smoked rosemary sounded like a great idea! I had a good idea on how to accomplish this, though it proved a bit more difficult than I expected.  More on that later.

Between these expressions of smoke, I needed to round out the cocktail.  When I was first brainstorming, my thoughts turned to my old standbys of Campari and Pimm’s No. 1.  After the smoke pepper infusion, I realized that I needed to round the drink and not enhance it.  Like tequila, mezcal loves to play with citrus and I reached for the cointreau.  This month was important not to overpower the drink with too much sweetness, so the dryness of cointreau was called for more than another curacao or the cognac orange liqueur.  A little more sweetness was needed, so I turned to vermouth.  Bianco vermouth specifically.  Unlike dry, or french, vermouth, bianco vermouth is still sweet, albeit drier and more floral than sweet, or Italian, vermouth.  .

The final touches, as I pondered, would be good ole Angostura bitters and a few unscorched rosemary needles to garnish!

The steps, aside from the smoke wash, are straightforward and simple. 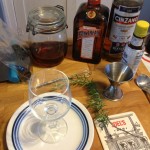 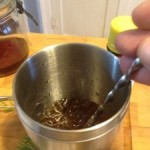 I put 30ml of the infused mezcal, 15ml of bianco vermouth, and 15ml of Cointreau into a shaker two-thirds filled with ice  I proceeded to stir it for a good two minutes.  I wanted a lot of dilution to integrate these assertive flavors.

I tied a twig of rosemary with butcher’s twine, out because I was making a roast chicken for dinner. This little sachet of rosemary was ignited with my lighter.  This took a bit more attention than I expected and only just scorched and got it to start smoldering. 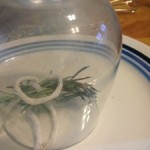 I placed the sachet on a saucer and inverted the serving glass over the smoldering sachet.  Because I just barely got it ignited and snuffed, I left the glass balanced on the twine to allow more oxygen in.  If I had gotten a better ignition and better smoldering, I would have let the glass rest evenly on the saucer.

IMPORTANT NOTE – Don’t try this without some idea of what you are doing.  Don’t cover an active flame without training.  Just like flaming shots and drinks, the idea is to cover the flame so that without oxygen, the flame goes out.  Whenever you play with fire, you have to be careful.  Explosions and burns are bad, people.

I strained the cocktail into the smoke rinsed glass and left rosemary needles to garnish. 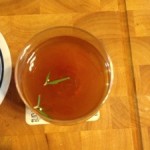 What did not work – the garnish.  The rosemary needles were the wrong call.  If I wanted to keep the rosemary garnish, it needs to be sitting across the top of the drink still attached to a twig.

With the use of mezcal and the multiple smokey components, I settled on the name Tezcatlipoca.  The rough translation of this mesoamerican god’s name is “Smoking Mirror.” Seemed appropriate.

What did not work as well as I wanted – the smoke rinse.  It was subtle with a smokey twang. 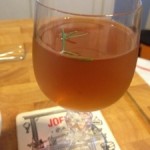 What worked – everything else.  The mezcal’s usual assertiveness (especially for the cheaper bottle I had lying around) was tamed, but not overwritten, by the vermouth and Cointreau.  The assertive smoke on the front of the mezcal was matched by a deep and penetrating smokey ambiance from the infusion.  A slight flavor of orange from the Cointreau brought the very hint of the pepper, not heat, but flavor wise as the vermouth sweetened the drink and gave the rosemary nose something to play against.

I was amazingly pleased with how smooth this drink turned out.  I was worried that the smoke and mezcal would make the drink very difficult to drink, but like a good Rob Roy, the flavors are present and strong without being overwhelming.

Truth be told, I started running into a time crunch.  The post has to be up by Midnight and I had dinner to eat, the aforementioned roasted chicken, as have to be up early for a 14 hour day tomorrow.  I may not do much in the way of editing this post to make sure it gets in under the wire.  Enjoy, not only the smokey goodness of the Tezcatlipoca, but also a peek into my stream of consciousness to draft this post.