The monthly online cocktail party known as Mixology Monday returns! I have been a bit too busy to get the last few in, so I really wanted to get back to it.  Thankfully, my twitter-friend Muse of Doom at Feu de Vie was hosting and had a great idea.  I’ll let her describe it further:

You don’t have to go full Blue Blazer, not nearly — heck, you could go full Fireball Whiskey! (or Fire Rock Pale Ale, etc..) You could riff on the Old Flame or come up with an inventive name of your own. You could even use a good firewater or burned wine. (and if you’re grilling fruit, save some for me, will ya?)

In essence, bring the heat! Bring the Fire! Bring your inspiration!

On a serious note: remember that lass in Britain who lost her stomach because the mixologists weren’t in control of the dangerous elements they were using in a cocktail? Let’s have none of that here, huh? There’s a lot more to Fire than just the electrochemical reactions happening on the end of a lit match. Stay safe and trust your gut about what you’re comfortable doing. We’re all here to have fun.

Muse of Doom did make one comment about almost making it Fire and Ice! In a nod to the George RR Martin “A Song of Ice and Fire” series (also known as Game of Thrones on tv), I went with the duality theme here.

Fire can mean a lot of things.  At the most literal, we have a flame and something burning but I’ll leave the burnt orange essence finished cocktails and jack-o-lantern garnishes to someone else.  We also will describe anything “heat” with the term fire.  For example – that salsa is hot! My mouth is on fire! It is time to break out the peppers.

A few years ago, several friends had an infusion party.  One of the drinks to come out of that inspires what I am going to try to make here.  A pepper infused vodka was blended with coconut ice cream to leave both the heat and sudden cooling effect in a single drink.  I don’t like coconut, so  it wasn’t my thing.

I started with a blanco tequila.  Since I was planning to infuse it, I went hunting for a decent mixto and wasn’t worried about needing a high priced sipping tequila.  I’ve been a fan of Zappopan as  my rail tequila for quite a while.  It is wonderful mixto that is made from the leftover batches of premium tequilas and, at the price point, I really have not found anything I think is better.

Next, I started the infusion.  I took 375ml of the tequila and placed it in a sanitized jar.  Into that, I added 2 almost quartered Serrano chilis.  I left the seeds and membrane in to make this a faster infusion of the capsaicin and to provide even better heat.  If you want it milder, take the time to remove the seeds and internal ribbing.

I tested a few nips at 30 minutes and there was definite heat. At 1 hour, it was getting pretty well infused.  I took the peppers out at 75 minutes.

Now it was time to start constructing a cocktail to highlight the fire in the tequila.  When constructing new tequila cocktails I start my mental riffing with either a Margarita (because it is the classic and well trodden path of tequila) or an Old Fashioned (because tequila has a lot of similarities to rye in my world). Since I knew that I wanted to make this a cooler or julep for the end of summer, I looked to the Margarita.  Liquor + citrus liqueur + citrus + sugar.  Okay.  Where do we go with that right now?

Building more on the ice counterpoint here, I have a bottle of half used blue Curacao sitting around from a punch I was asked to make for a baby shower.  Seems like a good time to use it! It isn’t the highest quality, so it has a good amount of sweetness to it in addition to some orange notes.  I also have a bottle of Rocktown Distillery Lightning Hot cinnamon moonshine. Whenever I get the chance to use local product, I jump at the chance.  A slightly different heat and some extra sweetness would help balance the heat of the tequila. Grapefruit juice seemed to make sense as the citrus and it is used in the Paloma highball across Mexico as the natural complement to tequila.

I combined these ingredients in a mixing tin and gave them a quick little stir.  Usually I would shake a citrus juice involved drink, but wait until the next step.

I blitzed the protococktail in the blender with the ice to mix it, dilute it, and crush the ice.  I packed a glass full of the crushed ice and poured the cocktail into it.  Top with a sriracha candied ice pepper and prepare for the heat! 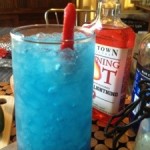 The Dragon of Summer

Crushing the ice in the blender with the drink definitely mellowed out the components.  You get a front end of the cinamon from the Lightning Hot, but it fades into the pure fiery pepper and tequila coming from the serrano infusion pretty quickly.  The ice keeps the drink nice and cold but you are left with a hint of heat tickling the back of your throat.  The sriracha candied pepper, held fast in an ice cube, taunts you.  It is a dare to let it melt and see what happens. Until then, you catch the faintest fragrance of the garlic and peppers mixed with the sugar when you raise the glass to your lips.

Let a little bit of firebreathing close out the season and try a Dragon of Summer before the weather turns chilly.

Combine all ingredients in a mixing tin.

Pack glass full of crushed ice then pour cocktail over.