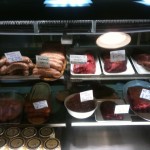 If you have been around this blog (or my personal twitter) for long, you know how much I Love Hillcrest Artisan Meats.  Brandon, Tara, and that entire crew do a fantastic job bringing high quality, well-sourced charcuterie and butchery to Arkansas as well as rounding out the store with other fantastic food products. Now it is our chance to help them win the Ham Independence contest!

La Quercia  is sponsoring a Ham Independence celebration to herald the arrival of their American made artisinal acorn fed cured ham.  Remember when I waxed poetic about Jamon Iberico de bellota and the indulgence I shared with other food bloggers? This is the same sort of product.  Acorn Berkshire Prosciutto: La Quercia has raised hogs and let them feed freely on Acorns to prepare them  to become an American version of that ever so marvelous Spanish delicacy.  This week, running through the Fourth of July, they are celebrating Ham Independence with purveyors of local and artisinal meat products across the nation.  The store with the most votes gets an entire leg of this tasty goodness. 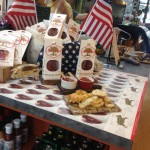 H.A.M. has set up a glorious display to La Quercia products and Ham Independence in the store.  I have to say that La Quercia products really are a treat.  Flavorful but never too bold with good texture.  You should stop by and get some! As an aside, H.A.M. is closing a little bit early on 06/29/13 so you should get there before 2:00pm.

To help H.A.M. win the Ham Independence contest, you need to go to Ham Independence and show your support! You should vote for H.A.M. there, which you can do once per hour between now and July 4th.  H.A.M. is up against shops in Austin, New York City, Brooklyn, and more. Little Rock has proven its ability to punch above its weight class for events like this (Third highest bake sale in the U.S. for No Kid Hungry at the Food Blogger Bake Sale); let’s do it again. If they win, Brandon said he planned to share the glorious leg of cured acorny goodness with his customers so get to it, HAManiacs! To win, we must rally round the H.A.M. and use the one vote per hour ability to show the world that LIttle Rock supports Ham Independence.

This morning, HAM had about a dozen votes and last I looked, they had gotten over 600.  In one day, they have surged to the lead so now we have to keep it going.  If they win, I promise to put even more effort (and sacrifice more sleep) towards a regular posting schedule again.