Sometimes, it seems like it is only Mixology Monday that gets me to blog about drinks.  Time seems to fly … or at least evaporate in the hustle and bustle of everyday life. This month, the theme is “Witches’ Garden” from Mark Holmes at Cardiff Cocktails.  As described:

As far back as we can look, the use of fresh herbs have been prevalent in the world of mixed drinks. From the early days of the julep, through Williams Terrington’s 19th century Cooling Cups and Dainty Drinks, to Don the Beachcomber’s ahead of their time Tiki drinks, fresh herbs have always been at the forefront of mixology. So lets take influence from the bartenders that once ruled the world of mixology, raid your herb garden that too often gets neglected, and start mixing. I don’t want to put too many limits on this theme so get as creative as you please, want to use roots, spices or beans as well? Sure thing. Want to make your own herbal infusions or tinctures? Sounds wonderful.

This got me thinking about infusions and tinctures (and reminded me that I have not yet purchased The Drunken Botanis despite repeated admonitions that I should).  I used to make a fantastic homemade limoncello that the past year or two I have not found the time and energy to actually produce. My mind turned towards herbaceous and fortified products as a start.  While there are lots of options, I settled on Lillet.  Sharp and almost briney, this aperitif has a slight sweetness to it that belies its golden hue.  To modify this and make good use of my theme, I set the peel of an orange and about half a dozen whole cloves in a good glug (or three) or Lillet. Okay, so I wasn’t using handfuls of herbs and making weeklong tinctures.  I’ll get my swing back one of these months.

What happened next?  I thought about the flavors being used and decided that bergamot seemed like a good idea – enter the Earl Grey Tea.  Earl Grey is a black tea that is infused with the oil of bergamot accounting for its distinct citrus flavor and delightful aroma.

We have begun to see temperatures reaching into the upper 80s and lower 90s so a summer cooler was the way to go.  The base liquor eluded me for some time.  I didn’t want my fallback gin because it was, well, not enough of a challenge for me.  The bourbons and ryes would likely overwhelm some of the flavors I wanted to coax out of the Lillet and tea.  Tequila, though, could do a good job! In the States, we often relegate tequila to margaritas and the occasional shot.  It is so much more and enjoyed in myriad drinks.

Okay, so what is the game plan?

We had a lot of strong flavors involved.  The CLub Soda is there to balance out some of the assertive tequila and Lillet flavors while adding the effervescence to the summer sipper that I find desirable.

The tequila, infused Lillet, and tea were added to the cocktail shaker, ⅔ filled with ice and stirred to chill.  They were then strained into the glass, which was filled with ice and topped with the soda water. A long sliver of orange peel was used as a garnish. 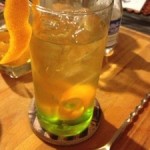 The flavors were barely there.  This was not a subtle enjoyment, but instead the volume was turned down to a bare whisper.  I was displeased.

I grabbed the now stripped naked orange, squeezed the juice from half of it into the shaker, repoured the ingredients, gave it a shake … voila! this was a definite summer sipper with refreshment rampant. I was actually surprised at how much the tea came through the flavors. Even more surprising is how the cloves brought out the distinct astringency of the Lillet.  it was also redolent with orange.  The orange peel, the orange juice, and the Lillet infused with the orange oil all came together for a beautifully orange drink that was not a screwdriver.

I eventually wondered what i did wrong with my conceptual basis.  Okay, that was actually about 2 minutes after mixing the fixed version above. I took the same basic proportions:

Placed them in a double rocks glass over ice, gave it a quick stir, and garnished with orange zest. 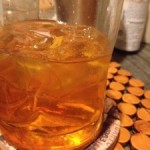 Ahh – this has the complexity I was seeking.  The lillet comes together with the teqila giving just a hint of danger in the combination of the astringency of the lillet and spice of the tequila.  The tea gives it a depth and complexity that plays with the clove to titillate the tongue. It works.  That is the glorious part.

What to call this concoction or three?  There’s the rub. I was tempted to dive into Greek tragedy for this but decided to keep it simple.