After a few months off from commitments outside of the blogging sphere, I realized that I needed to get posts rolling again and make a habit of it.  This month’s Mixology Monday provided a great excuse to concoct, evaluate, and post about a cocktail.  The theme this month is “Drink Your Vegetables.” As described by Rowan at Fogged In Lounge:

Want to get more vegetables but you’re always eating on the run? Maybe you hate vegetables but feel you should get more of them? Well then, how about a vegetable cocktail? No, not that nice little glass of red stuff Grandma put at each place setting—we’re talking something with a kick in it. You can definitely start with the little glass of red stuff and expand it to a Red Snapper-style drink like a Bloody Mary. Or how about a cucumber-scented cooler like a Pimm’s Cup, or maybe a cocktail featuring a vegetable-based ingredient like Cardamaro or celery bitters? Maybe you’ve been wondering if you can get more mileage out of that juice extractor before consigning it to the garage sale. However you get them in that glass, be prepared for the most fun with vegetables ever. Here‘s what to do.

My lovely wife insisted on getting a juicer as part of our new life together and I wanted to use it for this post.  I’ve gone into my love of a Pimm’s Cup before so I didn’t want to just add cucumber juice to the Pimm’s Cup.  I thought I would try something entirely new.  The Bloody Mary is probably the best known vegetable cocktail so I started with that template.  I also wanted to see how to work in a dark liquor instead of my usual gin based comfort zone.

I settled on rye, a bottle of Bulleit Rye is one of the staple components of my home bar, and beets.  Beets have enough sweetness I

thought they would add the needed dimension to a cocktail, have a wonderful color, and were not a vegetable I had used in a cocktail before.  The problem came when I was pondering accents to add that needed dimension to the drink.  Some sort of tart agent was needed to lighten the drink and create the tension for the beet’s sweetness to shine.  Peering in the bar, I settled on Bauchant, a cognac based Orange liqueur.  Bauchant is sweeter than Cointreau, more like Grand Marnier adding complexity and some needed sweetness to the drink.

Finally, I added a Lillet rinse to the glass. Over the weekend, I attended the “Drinking with Men” session of the Arkansas Literary Festival.  One of the cocktails featured was the Seersucker devised by Spencer at the Capital Bar & Grill as a way to use a sazerac methodology for new drinks.  The Lillet rinse adds an intriguing dimension to the complexity of the Seersucker and I thought it would work here. 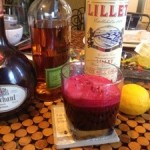 Step 1 ) Juice a beet. I juiced two just in case I needed to make multiple versions.

Step 5) Toss the ice to chill the cocktail glass and add a wee drop or two of Lillet.  Swirl around to coat the inside of the glass.

Step 6) Double strain the cocktail into the glass. 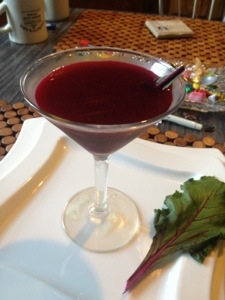 How did it taste?  It was not what I was expecting, but I kept going back for another sip. And another. And another. It had an earthy complexity that was heightened by the herbal LIllet notes from the rinse. The sweetness made the drink quaffable, but didn’t overwhelm the distinctly “beety” flavors while the rye provided the backbone to stand up to that flavor.  It was a drink that challenged my taste buds and made me much more introspective than I planned, focusing on the interplay of the spicy rye, earthy sweetness of the beet, and complexity from the Lillet at once.

The Sanguinary name is a play on the blood red color, from the beets, and a word of warning to avoid mixing this up when you are wearing a nice white shirt.

Aside from checking out the main Mixology Monday post, I want to give specific shout out to Zach of The Venture Mixologist.  We had almost identical ideas and his Beet Down with cachaca also sounds like a winner.