The Burger Caucus is a loosely organized collection of ne’er-do-wells primarily with some political bend who meet every month at different locations to have burgers and engage in what can only be called jibber-jabber. A collection of politicians, reporters, wonks, and pundits gather in our quixotic quest to discover the best burger in the Little Rock and central Arkansas areas. If you like a dose of politics, but not political theatre, with your burgers, look us up.

Members of the Burger Caucus were allowed to nominate the top three burgers in central Arkansas.  These rankings were converted into a seeding of the top 16 vote getting burger joints.  If there was a tie, my enlightened despotism as chair allowed me to flip a coin. Once the brackets were seeded, it looked like this: 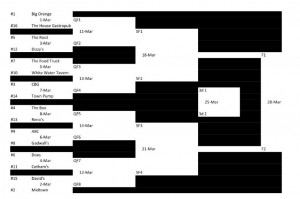 Members of the caucus then voted in a daily poll to determine each winner. And before anyone comments, I have already been informed about how I made a slight error in the bracket advancements.  Next year, we’ll fix it.

A review of the opening round: 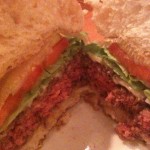 The Top Seed,Big Orange, came charging into the brackets with half of the number 1 votes and took the Little Rock dining scene by storm as they prepare to open another location! The House Gastropub just revamped their burger menu as a mainstay of the Height’s dinner rush.

The interesting part of this matchup is that the restaurants use the sanem meat, the same bread, and some of the same condiments.  Before opening Big Orange, Scott McGhee worked with The House on their menu explaining some of these similarities.

Big Orange has made a distinct name for putting together a fantastic burger, cooked to order, with simple but delicious toppings.  The House has pushed their burger comfort zone lately with the new menu but they have been known for their Burger’s since opening.  The Mac & Cheese Burger shown above is a great example of that.

The vote in the 24 hour voting window was Big Orange 13 to The House Gastropub 6. 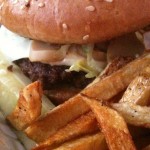 Number 2 seed, Midtown Billiards, shocked some people ranking this highly but the burgers served at the over 75 year old Midtown are the stuff of legend.  The best bite of food in the city after midnight, the Midtown Burger is prepared on a spotless griddle with a blend of “Midtown” seasoning without fuss or complication (beyond the optional egg you can add).

The number 15 seed, David’s Burgers, is part of a burgeoning line of Butcher Boy’s burgers that is focused on making simple but high quality burgers.  Pattied fresh, cooked fresh, with an unlimited supply of french fries, David’s provides a clean and uncluttered hamburger experience.

With few votes, Midtown won with 6 to David’s 1 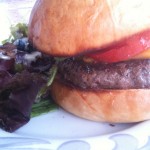 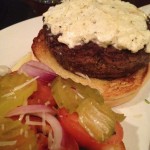 The Root Cafe is South Main’s premier dining destination.  With a pride in locally sourcing and sustainably producing as much as possible, the Root Cafe offers a fantastic vegetarian and vegan set of options as well as a wonderful Burger.  Each burger is prepared with care, one at a time in a unique location.

Dizzy’s Gypsy Bistro offers a wealth of different food, including their award winning cheese dip, so the quality (and quantity) of the burgers was a surprise.  These massive burgers are cooked well and topped with a variety of different ingredients, like Boursin cheese.

This was the closest match of the preliminary round! Every vote counts and after 24 hours, it as tied at 4-4.  One flip of a coin later, and Gypsy’s has the first upset of the Burger Brackets! 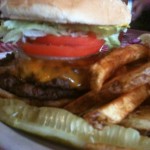 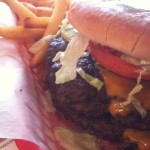 Both Doe’s and Cotham’s serve southern style griddle burgers with a long history behind them.  Doe’s has a soft spot in the Burger Caucus because it is the location of the first ever Caucus in 2011.  Doe’s also offers its chili to quickly turn a regular cheeseburger into a chili drenched chili burger favored by several caucus members

Cotham’s in the City is the Little Rock version of the Scott legend.  Southern through and through, the hamburgers come from regular burger sized up to the awe-inspiring triple hubcaps!  There is no easy or gentle way to describe what can happen when a multiple hubcap, plate sized burger is brought to a table.

Despite the sentimental beginnings of the Burger Caucus, Cotham’s prevailed 11 votes to a single vote for Doe’s Eat Place 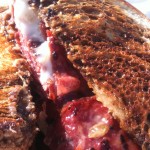 Okay, not a burger, but Ooey and Gooey nonetheless 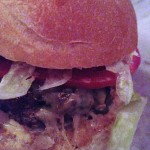 No. 10 The Kitchen at White Water Tavern

A year ago, how many people would have thought a food truck and an arguably “dive” bar would be in the top burgers of the region? Jeffrey Palsa of the The Food Truck puts out a fantastic product with exquisite sandwiches every day you can catch him.  He has a particular genius for handling melting cheese and The Truck Burger is no exception.  I was so enchanted by the ooey gooey cheese enshrouded burger I didn’t remember to take a picture.

Johnathan Wilkins has transformed the Kitchen at White Water Tavern into a force with which to be reckoned. White Water Tavern has spent a few years without real food service in the bar, then Johnathan came in and it has become a hands down favorite in the city.  Dubbed “The King of Bar Food” by the Arkansas Times, Johnathan turns out what has been called the best bar food in the city with 100% grass fed locally sourced hamburgers.

By a vote of 10 to 2, White Water Tavern advanced to the quarter finals! 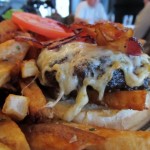 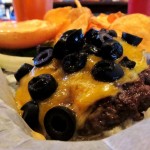 The number 3 seed, Capital Bar & Grill, has been a perennial contender for best burger in Little Rock since the Capital Hotel reopened a few years ago.  The burger is lovingly prepared in house with the options of adding house made bacon and pimento cheese.  The third place seeding came from it being a consistent second choice among the nominations.  At it’s best, The Burger is meaty, juicy, with just enough of a char to give it a nice contrast served in what may be the nicest surroundings of the entire bracket.

The Town Pump is another dive going through a resurgence.  It has returned to the forefront of the local scene consistently packing in the younger crowds with music and good times every week.  The burgers there are some of the best in town, including an olive-studded example of the burger that brings a salty relief to the meat.

CBG brought the heat in this match with a commanding 11 votes to Town Pump’s single vote advancing to the quarter finals. 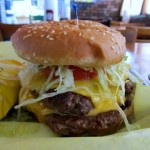 No. 9 Arkansas Burger Company vs.

The walls of ABC show a collection of Arkansas memorabilia of Arkansas on Cantrell road. The burgers are a little greasy but flavorful with a meaty juiciness that threatens to soak through the buns from a basic burger up to the Rock supersized meat and cheese and the Cap CIty mushroom swiss variants.

Individualization is the name of the game at Gadwall’s in NLR. The burgers at Gadwalls can be topped with a dizzying combination of toppings all available for your own creativity to apply. North Little Rock is well represented by this mainstay.

Arkansas Burger Company with a resounding groundswell of support came out on top with 10 votes to 4! 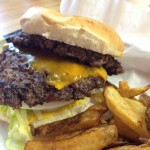 The legend accompanied The Box from the original location to the newly reopened location. The same griddle used for decades remains the heart and soul of The Box. It took nearly two years for the griddle to return to use in a new space after construction and permitting delayed reopening, but The Box has lived up to its namesake ever since. The Box serves up a salt-crusted Southern style burger that exemplifies the Greasy side of the burger equation in the brackets.

The second North Little Rock entry this year, Reno’s boasts a comfortable setting and tasty burgers served in the Argenta District. The half pound Argenta Burger will give you a great time for the money, though even this Burger Caucus aficionado may recommend looking at the rest of the menu from time to time.

The Box’s legend prevailed, garnering 14 votes while Reno’s, despite a valiant effort, remained at a single vote.
With the quarterfinals set for this week, who is going to prevail?  All caucus members can vote on the Facebook group page for the approximately 24 hours that each match is open.