To be honest, I’d been waiting to write this for one of those months when I had not managed to come up with anything else and needed a safe and easy post.  Hot Dog Mike, however, has announced he is leaving Central Arkansas to return home and take over the family business. This post, instead, is going to be an elegy of sorts for Hot Dog Mike and his contributions to the Little Rock and Central Arkansas food scene. 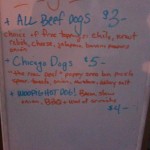 Hot Dog Mike has won acclaim and fame, frankly, the world over.  He has been featured in numerous local news stories as well as the Today Show and his charity hot dog sale for Most  Expensive Hot Dog in the World made international news. The franks themselves, were not the most impressive or special of franks(Sorry Mike).  Any of us could go and buy the hot dogs that Mike used.  What set him apart was the creativity of his topping concoctions and his personality. 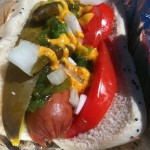 The classic hot dogs were available – chili cheese dog, polish sausage with sauerkraut and brown mustard, or my personal favorite the Chicago style dog(steamed poppy seed bun, pickle spear, sliced tomato, neon green pickle relish, chopped onion, sport peppers, mustard and celery salt).  Not everybody liked having their dog dragged through the garden, so Mike had to stop carrying the poppy seed buns required for the Chicagos a little while back. These were all tasty and, for this area of the nation, it was a great novelty to get them from a hot dog cart. These may have been the beginning of HDM’s journey, but they are far from the end.

Where Mike shines is how he would come up with new topping combinations.  HDM would treat the hot dog like a sandwich in any high end shop and work through flavors and toppings that would bring a unique flair to the frank.  He once told me that he had a notebook with several hundred hot dog ideas he had not yet made on the cart. The CAPITALDog 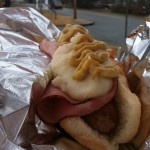 (cream cheese, relish and sport peppers). The WOOPIGDog (all beef dog topped with bacon, slaw, onion, bbq sauce and a hint of spicy sriracha sauce).  The SRIRACHADog (All beef dog, cucumber, onion, mayo, Sriracha sauce) was one of my favorites.  The chill of the cucumber perfectly offset the heat of the sriracha. The HO-HO-HotDog Christmas season special (All beef dog, black forest ham, garlic mashed potatoes, spicy brown mustard. Limited edition, only available during the holidays.

Mike is quick with a quip, but also with a greeting.  He is a man who recognizes his customers, and his friends.  He makes sure that you feel like you are getting his attention when you are trying to wrangle a dog from the cart and even used the long lines created as the basis for bumper stickers.  He firmly kept his tongue in the side of his cheek while reveling in the chance to spend his days making, selling, and eating Hot Dogs.

The final piece of the puzzle that is Hot Dog Mike was the influence he had on the food scene here.  He brought the idea of food trucks and carts into main stream popularity.  While there had been a few that would bop ar 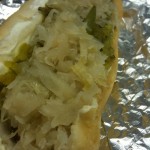 ound time, primarily taco trucks in the Southwest portion of the city, HDM caught lightning in a bottle when he tapped the rising national popularity of food trucks and exploited Little Rock’s social media scene.  He did this through masterful use of social media, a commitment to the food truck community as a whole, and having a real heart behind the gab.

He is a prolific twitterer[@HotDog_Mike] and sets the bar for any other food truck in the region for how to communicate with the customer and fan base through social media.  We know where he is going to be and when.  He tells his fans and consumers when he is running a few minutes late and why.  He engages and responds to his followers on Twitter and Facebook creating a closeness with his consumer base that was rare in this town.

Mike never failed to encourage others to eat at his competitors’ stands.  He wanted the food truck scene and component of the central Arkansas dining community to thrive.  He worked with the Main Street Food Truck Festival, was out at the World Cheese Dip Championships, set up at University Market at 4Corners, and drove people to these places where as often as not they would grab somebody else’s fare.

He also had a heart.  He sold the most expensive hot dog in the world for $1501.  The hot dog was a quarter pound all beef dog 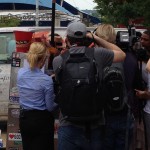 topped with lobster tail, saffron aoli, and gold leaf. Actually, he sold 4 of them.  He donated $1500 from each of those hot dogs to charity, the One, Inc. which is a 501(c)(3) focused on homeless outreach and assistance.

During the 2011 Legislative session, when he was a quick walk away from my day job, I ate there once a week bringing hot dogs back to my co-workers.  I had him make a delivery to my class (teaching on the side because I don’t have enough to do already). He was part of the ebb and flow of central Arkansas.

More than any of this, I call Hot Dog Mike, a fellow member of the Brotherhood of the Fedora, a friend. I understand and commend his decision to return home and place such a priority on family, but I will miss his company and all of Central Arkansas is indebted to him for making Food Trucks part of the popular local culture.