MxMO returns again, and sometimes that seems to be the only thing that gets me to lose enough sleep to post a new blog. This month was all about the garnish, Garnish Grandiloquence, on the drink and under the purview of Joseph from Measure & Stir. I realized my paring knife was not sufficiently sharpened and decided to go another route. 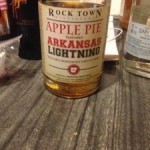 Start Aside: While the first few batches that came out of Rocktown when they opened showed room for improvement, the years have really been good to their products.  If you have not given one of their liquors a try in a few years, you should.  /Aside over.

While the margarita is one of the definitive summer drinks, I thought about the Apple Pie Arkansas Lightning (“APAL”) and the idea of subbing it in for the Cointreau in a margarita took shape.  My garnish, especially for MxMO, didn’t turn out quite as I wanted because I got impatient. You’ll see why later.

My biggest challenge was controlling the sweetness of the cocktail and the garnish.

Step 1:  Get out your mandolin or your best knife skills and slice a granny smith apple.  Mistake 1 – probably left them too thick.

Step 3: While the simple syrup cools, the apple slices are baked to reduce some moisture and further deepen the apple pie like flavors we are going for. Also, now is the time to juice some limes, get a plate of turbinado sugar and add ground ginger, and finish mis-en-place.

Step 4: Wait. I got bored and impatient here.  After about 40 minutes in the oven, the apple slices were not quite there, but I wanted to finish the cocktail.  Low and behold, I did just that.

Step 5: Because we are using fruit juices and simple syrup, I always shake. In a mixing tin or shaker 2/3 full of ice, add the tequila, APAL, apple juice, lime juice, and simple syrup. Shake vigorously.

Step 6: Wet the edge of the cocktail glass with the lime wedge you squeezed for juice and roll in the plate for the rim.  Add the baked and candied apple slice.

Step 8: Ask the tasting gallery whether this worked as you envisioned. 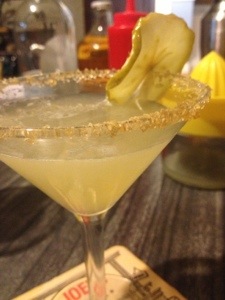 I liked my initial sips, but was worried that the lime might be overpowering the apple for others.  All three of my tasters thought it was great and worth keeping or refining.  Phew! My special ladyfriend, her mother, and a mutual friend of ours all liked it!

The ground ginger is very forward on the nose when you bring the drink up to your lips.  It starts the idea of spice in this. The drink itself has a definite front note of apple with only the mildest burn of the tequila.  The richer sweetness  the turbinado matched well with the simple syrup enhancing the “apple pie” idea. The tail notes are lime heavy (where my above worry came from) and brings the margarita idea back to your mind for the finish. I liked the spice and sweet playing with the tart of the apple and lime.

The garnish was made by hand, and also flavored the simple syrup used in the drink.  The only way I would really improve the garnish would be to get a snowflake cookie cutter to add a more visual representation of “winter” in the drink.  And I would be more patient with the oven to dry out the apple. I don’t know if the garnish was grandiloquent enough, but one does one’s humble best.