Second 2012 Presidential Debate  The outlook tonight is short once we get to the debate. The humble blogger is recovering from oral surgery this morning.

The same basic themes from the first debate carry through to this debate. To both debaters’ credit, they eschewed the standard color iconography this debate and switched – Gov. Romney in blue and Pres. Obama in Red.

Analysis:  Pres. Obama has a fantastic knot and collar combination.  The knot looks like it could be a Cavendish knot that is perfectly sized for his collar and neck. The dimple is off center but well formed and gives a great depth to the tie. The rich color of the red tie with a subtle pattern is similar to the tie he wore for the first debate. The only real negative I give is the color of the tie doesn’t seem to be as perfect for his complexion as Gov. Romney’s is for his. 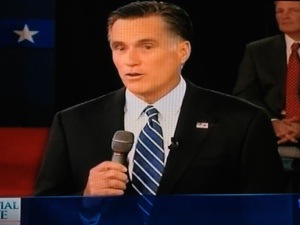 Analysis: Gov. Romney kept with strong stripes in his tie.  I love the shade of blue he used, and the thicker white stripe plays better on TV than the blue stripes VP Biden used last week.  The knot size is good, but the knot itself is too skewed.  It also lacks a good dimple.  Overall, Gov. Romney did a nice job with a thicker knot and classic stripes, but the askew knot and lack of dimple hurt him in my view.