During the primary season, I would grade the neck wear of all the prospective Republican nominees during each debate.  Tonight, I will continue that tradition with the Presidential Debate.  The grading for Pres. Obama and Gov. Romney tonight will be based on color choice and pattern, the size and proportion of the knot compared to the collar, and whether the knot achieves the narrative each candidate wants to further. Before the debate, I wrote what I think are the goals for each nominee as well as suggested knots. Below, I will compare what I thought would be a successful knot and tie for each candidate with what they actually wear. Bad camera phone pictures of the CSPAN coverage on my TV.

Great dimple and shape for the knot.  Very close to what I pregamed below. A subtle pattern creating some depth but it doesn’t read well from all angles on the screen. Also, the knot size is off in proportion to his collar.  It the knot was a bit larger or his collar a bit smaller, it would have been a slam dunk.

Pre-Debate Analysis: President Obama is going to want to convey energy and a polished accomplishment.  We know he is in pretty good shape, so a suit tailored to show he is fit should be mirrored by his knot. He is already the sitting president, so he doesn’t want a knot that is too small or askew.  I think a great choice would be the Dovorian knot. It creates a wasp-waisted knot that would mirror the general appearance of a tailored suit enhancing the polish of the office.  Here is what it looks like:

I expect Pres. Obama to wear blue because few candidates will deviate from the color dichotomy of the political parties.  I had a subtly patterned tie that gives some depth without being distracting. 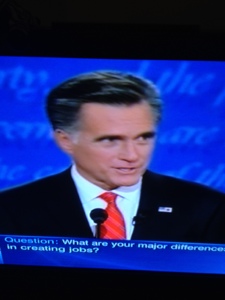 A repp stripe style tie was a good classic option for Gov. Romney. He also has a smaller collar than Pres. Obama so his knot looks a little bit better.  It is too small in my opinion for what he wanted to do and for this format.  The picture above does make it look a little smaller than it is.  The lack of dimple, the slightly too small size, and the fairly boring red on red repp stripe lead to Gov. Romney’s lower grade.

Pre-Debate Analysis: Governor Romney has a different goal.  He needs to convince people that he is up for the job but at the same time he needs to come across as closer to the mythical American everyman. The knot needs to be substantial enough to give the idea of a chief executive in charge but not so large that it looks like a fat cat executive from central casting.  He also doesn’t want a classic knot, like a double windsor.  I think a Cavendish would be a good option.  it creates enough heft to give the authority he wants but still harkens to the classic Four-in-Hand knot. 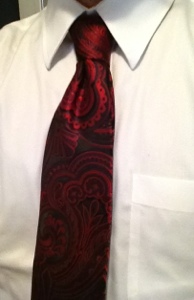 I didn’t have a good pattern in the classic red for the GOP for the example pic.  Something like a paisley may appeal to Gov. Romney, but a solid tie against a light patterned suit might work better to project strength and authority.