It is time once again for Mixology Monday.  Long story?  Read the previous MxMO post.  Short story – once a month, the cocktail blogosphere has a cocktail party with a theme determined by the host. This month’s theme is “(It’s Not Easy) Bein’ Green.”  Every drink must feature, prominently, a green ingredient. I am sure that a number of midori and absinthe based drinks will be reviewed and consumed this month.  Once again, I had lost track of time and planning; what could I do at the last minute?

Limes! The most common green ingredient in a bar is this humble citrus fruit. 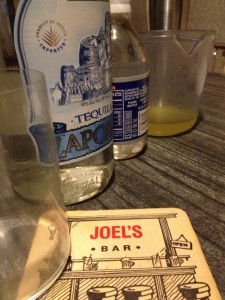 A gimlet is a rather simple combination of sweetened lime syrup, a liquor, and sometimes topped with soda water. Commercially, Rose’s Lime Syrup is commonly used.  Gin is the most frequent base liquor, but that was still a little too easy for me. I thought I would, instead, make a lime syrup from scratch and pull some tequila out of the depths of the liquor cabinet. 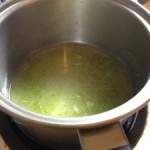 Juice of 2 Limes
Fill with water until the liquid equals ⅓ cup
Zest of the two limes
⅓ Cup of Sugar
Bring to a boil.
Simmer ~5 to 10 minutes.
Strain & cool.

You could leave the now candied lime zest in, but the straining makes clean up a lot easier.

Shake.  A lot of gimlet recipes say to stir, but when I am dealing with fresh syrup I prefer to shake to make sure my sometimes inconsistent viscosity syrup is combined. Also, if you decide you like more tart citrus and add lime juice on top of the lime syrup, shaking is a must.

Strain into an ice highball glass.  For a summer drink, I usually prefer to have them on the rocks. The additional chill helps the long slow sipping process.

Garnish with lime wedge and a pinch of the lime zest to keep the green going. 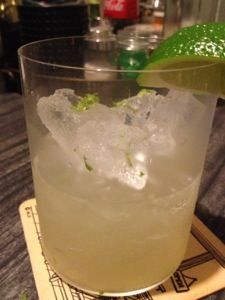 You may have noticed the soda water in the picture above.  One taste tester found the drink to be a bit too strong.  I added a few splashes of soda water to lighten the drink and open it up.  She liked it.

I liked it.  It certainly seemed to remind me of the recently departed summer.  In fact, this would have been a great refreshment during a summer that tried to kill the rosemary bush out front. It sits somewhere between a margarita and a daiquiri.  The tequila adds a bite to the traditional gimlet that brings out the bitterness of the lime zest used in the syrup.  These components balance the sweetness of the syrup well.

I was a little disappointed that it did not turn out greener for this month’s theme, but I humbly throw it in to consideration. The surest sign that the drink was a success – I kept reaching for another sip.