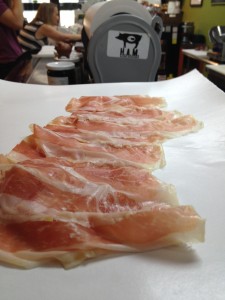 Jamon Iberico de bellota is, arguably, the most expensive ham in the world and constantly mentioned as one of the best hams in the world.  We are talking about a cured ham from Spain made from Black Iberian pigs raised in the area near the Spain/Portugal border It is similar to Italy’s prosciutto.  The pigs involved are raised under very strict guidelines from the Spanish government and the final three months of their life is spent free-range eating only acorns. Bellota = acorns. This strict level of food scrutiny continued through the slaughtering and butchering process. 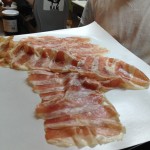 The ham is then dry cured for 3 years.   Yes, three years go by before the ham is ready.  It 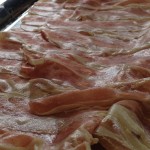 is going to be fattier than serrano ham, another cured spanish ham, so will be richer in flavor.  Because of the high acorn diet, the fat in the ham picks up some of the color of the acorn.  You can see the rich redness of the ham offset by a slightly yellow band of fat, instead of a pristine white fat. If you want to read more about the process of raising, preparing, and creating jamon iberico you can read this wonderful write up from Simon Majumdar in The Guardian.

Here at Hillcrest Artisan Meats, I’ve stared at the $96/lb Iberico ham on the board every time I went in but could never bring myself to order even a sliver. Through the wonders of twitter, Ibericoplooza just sort of happened.  Daniel Walker (contributing to Eat Arkansas), Kevin Shalin(of The Mighty Rib), Michael Roberts (of Arkansas Foodies and contributing to Eat Arkansas), Jess Miller (of Arkansas Foodies), Christie Ison (aka Fancy Pants Foodie), and myself decided to all chip in and buy a pile of jamon iberico and revel in its glories together.  It also gave a bunch of food blogging types a chance to actually meet in person. As far as hashtags go, we went with #HermanosJamonos. The company was worth every effort even if the food had somehow failed to live up to our expectations.

All of us write about food because we care.  We share a passion for food, flavor, and the experiences it brings.  And we gave ourselves an excuse to try a truly decadent ham. 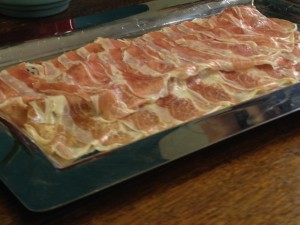 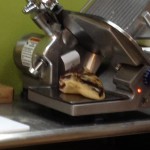 The richness of the meat is apparent from the color itself.  The time spent curing was well served.  When you first put a morsel of this ham into your mouth, your eyes open.  It has a nutty and rich flavor that begins to fill your senses.  The fat is melting but even the meat has a colloidal feel.  As some others have described, it quite literally melts in your mouth. The acorns really drive the flavor of the fat giving a creamy contrast to the distinctly meaty portion of the ham.  This flavor is left on the back of your throat as the woodiness of the jamon finishes.

The “yellowness” of the ham fills the mouth as that fat melts away.  It is slightly salty; 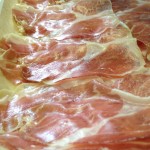 much less so than prosciutto.  As the meat breaks down without you having to chew, the pure tasting moment happens.  When you are chewing and exerting effort to eat something, the flavor can sometimes get lost.  With the bellota ham, there was no effort needed to not exert that effort.  The ham is a sublime food experience more than a visceral one.

This is a food experience unlike others.  If cured meat is your thing, then you owe it to yourself to track down just a quarter pound of jamon iberico de bellota.

We cleaned the plate of a half pound of the jamon sliced amazingly thin. 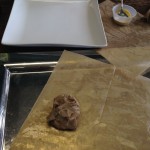 Check out the other posts here: 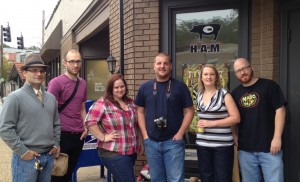