In the lead up the Vice-Presidential Nominee debate this evening, I once again turn to political neck wear. This is my pre-game of what I expect or what I think ought to be done for both candidates with respect to neck wear, and why.  I will update the post later with the actual knots from the contenders.

I expect both gentlemen will wear a crisp white shirt and a tie in the respective ordained iconography of their party – Red for GOP Nominee Ryan and Blue for Dem Nominee Biden.  (Yes, in the pictures below of my attempt to demonstrate what I mean, I am not wearing a crisp white shirt). If they actually diverge from this script, they will likely get a bump in my grading scale.  If either of them wears a spread collar shirt instead of the point collar shirt that will also be worth a bump.  A button-down collar will be a deduction because of the formality of the event.

As always, on Southern Ash, I am not commenting on policies or preferences.  This is a purely superficial look at neck wear as well as the likely narratives each campaign wants to push with the imagery associated with the candidate. The neck wear will be graded on knot size, knot shape, proportionality with the collar and lapels of the suit, and other ineffable qualities. 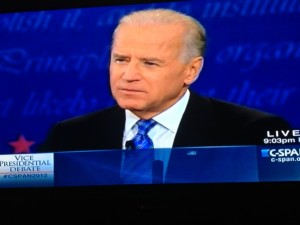 Analysis: As expect, a white shirt with point collars and a blue patterned tie.  Overall, I like VP Biden’s choice.  The stripe is subtle and does not distract from the overall tie.  The tie is bleeding a little bit on the TV which cuts against him.  The knot is well proportioned with a slight dimple. It is a solid choice that appears to accomplish what the ticket wants to accomplish.

Pre-Gaming: The Democratic Party has a lot it wants to convey in this debate.  Generally, the media considered Gov. Romney to have won the style and presentation portion of the first Presidential Nominee Debate.  Consequently, the Democratic Party wants to emphasize VP Biden as a competent statesman who connects with people.  He is going to need to project a kind of authority to reinforce the obvious age differential with Rep. Ryan.  I expect to see a narrative that portrays Rep. Ryan as a “kid” or “too young/inexperienced” to handle the job of Vice-President, much less President.  To this end, I would think something like a classic Windsor Knot would be appropriate.  The (most likely) blue tie will be subtly patterned, but not in the way pres. Obama’s was.  I expect stripes, not unlike this picture below. The Windsor knot will allow VP Biden to project authority and gravitas with a knot that most people will instinctively recognize. 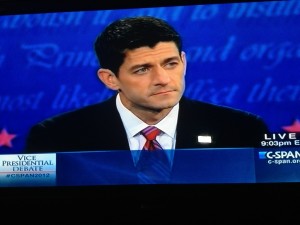 Analysis: The major negative for Rep. Ryan is the color combination on the tie.  The strong purple strip at the neck is distracting from a debate perspective.  It is tied well, but the proportion is off slightly.  The dimple is strong and well formed.   Also, Rep. Ryan has seriously stepped up his suits.  Good job and on the balance, Rep. Ryan wins the neck wear show down tonight.

Pre-Gaming: If the Democratic Party wants to rebound from the previous debate, the GOP wants to cement the momentum swinging in the Romney/Ryan ticket direction as we count down the final days until the election.  Rep. Ryan will likely want to play up his relative youthfulness and portray himself as a fresh take on governance to fix the problems that have been embedded in Washington over the previous decades. First, he needs a suit that fits. If he wears a suit two sizes too large, as he has been, VP Biden will be able to really hammer home the idea that Rep. Ryan is a “kid” borrowing his father’s suit for prom. With the neck wear, I would expect a red tie that may be a modern 2.5” width instead of the classic 3” width.  Rep. Ryan is athletic and slim, so instead of trying to make a knot that is too skinny for a suit, by slimming the tie he can echo that athletic appearance without a difficult knot.  I also expect something simple from his knot – possibly a four-in-hand or a nicky.  I didn’t have anything in my personal collection that fits the bill (red and 2.5”), but replace the purple in this tie with red to get an idea of what I am talking about: