Mixology Monday started 6 years ago as a monthly brain and cocktail exercise among the booze bloggers in the then burgeoning cocktail portion of the internet. Paul Clarke from The Cocktail Chronicles spearheaded it, though as with many things on the Internet, time and attention could not always be maintained.  Paul passed the mantle on to Frederick at cocktail slut and the tradition continues.

I promised myself that I would take part for some time; I am taking the plunge this month!  The theme is equal part concoctions.  The idea is that, no matter how many components you use, each component will have the same measure.  Drinks like the Negroni and the Last Word are based on this idea so it seems like a well placed and well fitting challenge.

I will admit that I have let my liquor cabinet run itself down a bit this summer.  When I glanced in, however, an idea struck me. The Old Pal is a Negroni variant.  I adore Negronis’.  The bitter, slightly sweet taste of Campari is a pure and unadulterated joy in my world. It takes the idea of a Negroni and plays with Canadian Whisk(e)y instead of gin. Simple enough.  Instead of canadian whisk(e)y, I was staring at a bottle of bourbon.  As I pondered how to make something at the beginning of autumn using bourbon and Campari, I realized that the smoother and sweeter bourbon would need a more herbal counterpoint.  Adding in some freshness and complexity instead of my usual citrus ought to work out nicely.  In comes my friend, Pimm’s No. 1!

A long strip of lemon peel as the garnish. (Okay, I couldn’t completely avoid my love of citrus).

Fill the mixing tin ⅔ of the way with ice.  Add your spirits. Stir.  Strain into a highball glass over ice and add the long strip of lemon as a garnish.

I was pleasantly surprised at how the Hooligan turned out.  The Pimms is not very apparent on the nose of the drink, but it frames the Campari nicely with each sip. The herbal qualities of the Pimm’s are used to good effect to bring out some subtle flavors in the bourbon and campari while note the assertiveness of the Campari prevents the Pimm’s from making the drink too medicinal. The tail of the drink and the aftertaste have the distinctive telltale lingering bitterness of Campari.

This is not a hot weather staple, but instead fusing the Negroni and Pimm’s Cup with the bourbon leaves a chilly soul feeling slightly warmer.  I will admit this is not the most original of possible cocktails for MxMo, but does show the potential maniacal genius you can find when you throw open the doors to your liquor cabinet without fear of failure. 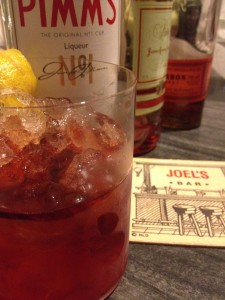