Vegetarian grilling isn’t hard, happens to be tasty, and even if you are eating meat you ought to be including veggies every time you grill. First, review the general notes about grilling.  I use charcoal, I usually do a two zone fire with the coals heaped on one side for a hot zone and a empty side opposite for indirect heat and to control cooking times. 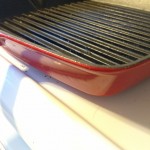 We are still under a burn ban in Southern Ash country and my charcoal grill falls squarely in the definition of an “open flame” that is prohibited.  Instead of grill pics, I am using a grill pan inside.  The grill pan is an enameled cast iron pan which means it will hold onto heat well and let me approximate grilling.  Le Crueset is a rather famous and well reviewed manufacturer. It will not get as hot as a grill, so if you are also using a grill pan you may need to increase cook times by a few minutes.  Additionally, you will not have an indirect heat zone for rotation.

I love bitter flavors, as established through a number of my drink preferences.  On the grill, I like to take radicchio to up the ante on my dishes.  I quarter the radicchio through the core to keep it intact, brush with a little olive oil, and set in the indirect heat section of the grill.  The bitter and slightly tangy flavor of radicchio is a unique accompaniment to the rest of the dishes.

Grilled radicchio slaw is a way to really amp up the interest in your side dishes. 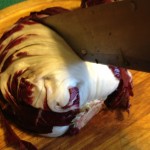 Step 1:  Quarter 1 small radicchio, about the size of a grapefruit, and brush with olive oil and season. PIC  Place on direct heat portion of grill or grill pan. After about 4 minutes, turn the radicchio so the cut but uncooked side is on the grill.  After another 4 minutes, flip so that the rounded portion is on the grill.  Another 3-4 minutes should be sufficient. 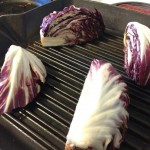 Step 2: While the radicchio is cooking, sliver 1 medium carrot with a vegetable peeler. Place 2- 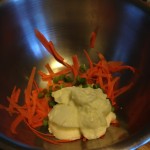 3 tablespoons of fat free plain yogurt or plain greek style yogurt in a bowl. Chop 1-2 scallions or green onions. Mix these together.

Step 3:  Remove radicchio from cooking and break down by holding it with your tongs, removing the core, and slicing across the grain. 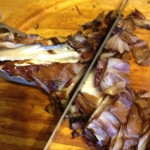 Step 4: Mix the slaw together and marvel at your work! 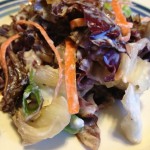 The warm radicchio, thus broken down, will soften the yogurt a bit (hence why we used so little) while you mix the slaw together. Instead of a sweet or overly creamy slaw, you get a sharp and bitter slaw that can be used to highlight other dishes. If you want to reduce the bitterness, you can soak the quartered radicchio in water for an hour or add a dollop of honey to the yogurt.

A grill can be used for more than just meat! Next time you fire up the grill, throw a quartered head of radicchio on.