Grilling is the natural cooking method in the summer when you live in the south.  I was going to wait until the county burn ban was over to post this, but instead I’m going to post this so we can all be ready to get back to grilling (and snapping snazzy pictures in my gonzo food photography way) as soon as the ban is rescinded. Again, while there is a burn ban, outside grilling can be part of the forbidden activities, especially when you use charcoal. These pics were taken before the burn ban was declared here in Pulaski County. 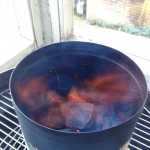 I have a round 22.5” diameter Weber brand grill.  It is fairly simple, straightforward, and easy to use. I prefer lump charcoal, but I will settle for briquettes when need be.  I prefer to use a chimney starter to get my coals going. I usually make a two-zone fire in my grill: Direct heat zone with charcoals heaped up on one side and the indirect zone without any charcoal on the other.  I will usually position the vent over the indirect side so that it will act like a convection oven and encourage the hot air to flow over the food there.

After I am finished cooking, I grab my stiff bristle grill brush and scrape down as much of the grate as I can to clean off caked on gunk [technical term]. Especially early on it the grill’s life, I will spritz a dish towel or paper towel with vegetable oil and run it over the grate after this.  Then I lid the grill, close the vents and let it sit for a while.  If you are trying to prolong the life of your grill, don’t douse it in water – thermal shock can destroy your grill and the water will interact with the basic coals to start eating through the metal.  Second, the long slow heating of the oil is similar to how you season a cast iron skillet.

Okay, everybody through the basics so far? There is no way that I can even come close to the fantastic job Serious Eats has done with the grilling series.  If you want a more in depth discussion of these sorts of grilling basics, they have well written explanations with well shot pictures to accompany them.

In the meantime, we’ll start off with a chunk of meat:

Flat iron steak.  Great grilling steak for medium-rare to medium applications.  Pretty low in fat content, so shorter cooking time and a marinade are in order.  The marinade won’t penetrate too deeply into the steak, but it will add some flavor to the outside and it is pretty fun. I start with olive oil.  Then salt & pepper.  A few squirts of sriacha. A few chopped garlic cloves.  The juice of half a lemon.  This is similar to the vinaigrette we made a while back.  I give it a good whisk, place the meat in a plastic bag and add the marinade. 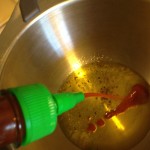 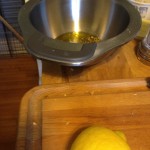 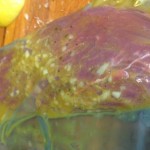 See above notes about a chimney starter & the two-zone fire.  I add a few fresh coals to the direct heat side as soon as I put the lit coals in.  These will catch and heat up over time possibly preventing me from having to recoal the grill if I do this fast enough. 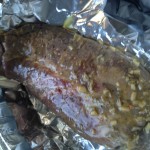 To prevent cross contamination, I take a large sheet of aluminum foil and place it in the pan or tray I want to use for the cooked meat.  On top of that goes the uncooked meat! Once you put the meat on the grill, you can carefully trash the foil and have a clean, uncontaminated platter for your cooked meat. Never use the same surface to transport both uncooked & cooked meat.

I also prepped some eggplant and zucchini for the grill, but we’ll cover that in the next post. I rotated them from the indirect to the direct side making full use of my time.

The meat went down.  It was rotated at about 4 minutes.  Flipped after 4 more.  Rotated after 3 minutes and removed from the heat after 3 more.  In the meantime, I was rotating the vegetables and taking them off as they got through the high heat areas.  While I let the meat rest for 7-10 minutes, I moved more of the veggies onto the direct heat are and finished them up. 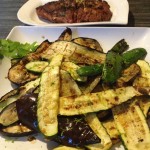 Thus we got to dinner. 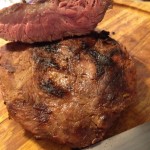 Next up?  Vegetables take center stage, burgers, and maybe …. Just maybe … pork chops if we ever get out of the burn ban!