Daiquiris are the drink for the sweltering middle of the summer. Take a cue from Papa, by which I mean Ernest Hemingway. It is the summer and it is hot. At some point you want a refreshing beverage. Papa Hemmingway was known for his Daiquiris. Yes, Daiquiris. While the Daiquiri, like the Margarita, has suffered the ignominy of premade mixes and frozen slush in various neon hues, the drink itself if refreshing and powerful when made to order. Even better, Thursday, July 19th is National Daiquiri Day!

Rum, especially light rum, is pretty common in the summer. Mojitos hit their stride, but do you really want to try to muddle all the mint and sugar at home? DId you make that mint simple syrup when we talked about Mint Juleps? No? Okay. A Rum & Cola highball only goes so far. Summer and citrus go together like peas in a pod.

Rum + Lime Juice. Maybe some simple syrup. Yep. That is it.

The daiquiri is an inverted highball. Where the highball is part liquor to two parts mixer, the daiquiri is one parts mixer to two part liquor. This can be potent. If you peruse some of the linked recipes, they can very up to 1:1 or 3:2, but I like 2 parts rum to 1 part lime juice with just a hint of simple syrup. Like many simple cocktails, it is easy to make them poorly.

Rum : Start with a light rum. These summer staples are often slightly sweetened and not heavily flavored like the darker, aged rums. You can start with the most common & most popular light rum, but keep your eyes out for the other options like this Cruzan rum I’m using

Sweetener – A little shot of simple syrup or a barspoon of sugar will suffice. (See below for Simple Syrup Recipe)

Take a mixing tin of your shaker, and fill ⅔ with ice
Add rum
Add lime juice
Add a shot of simple syrup to taste.
Shake. This is one that you will want to shake. When you have citrus juice in a cocktail, you want to shake it to mix it well.
Strain into your serving glass of choice
I usually use a goblet 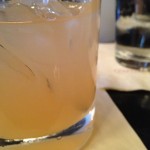 maraschino liqueur. This is also called El Floradita. If you’ve got the stuff, try it! Like I said before, summer and citrus go together gloriously, so I routinely recommend using grapefruit in a drink like this.

Simple Syrup is simple; it is sugar water. 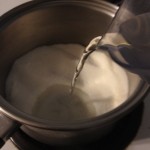 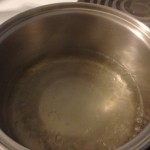