Another new foodtruck has graced the city – Southern Gourmasian. FTC disclosure – I got a free lunch through twitter so one of the entrees you see below was provided by SG for what I can only surmise is goodwill building, and trying to entice me into a regular customer.

Southern Gourmasian bills itself as Southern style food with an Asian twist, or Asian food with a Southern Style twist – either seem applicable.  When I approached & told them I was the lucky recipient of a meal, I asked what I should order.  Without hesitation, I was told one of the steamed buns – “that’s what we are known for; that’s why we wanted to do this.” Steamed buns it was! I chose the pork stuffed steamed buns as a good introduction and ordered a bowl of chicken & dumplings to take back to my special ladyfriend.

The buns were amazing.  They were perfectly steamed, light and fluffy acting 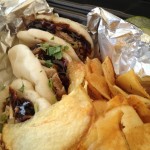 like a semi-solid cloud cushioning the rest of the food. I started with one of my three buns plain. The pork was tasty enough, maybe a little on the dry side, but shredded well and portioned well.  The hoisin sauce was sweet and intriguing, but I felt like something was missing.  Nestled in the corner of the packaging was housemade pickles and a mango sirarcha slaw …

Once these were added on top of the pork buns and the lime wedge squeezed, the balance of flavors was amazing.  The tang and ever so slight zip provided by the veggies was what the buns were missing.  It balanced the sweet, salty, sour, bitter, and umami.  I was so delighted, I forgot to crack open the lemongrass ketchup on the side!

I did tear into the potato chips on the side. They tasted like potatoes, not grease, oil, or salt.  Like all of the best French fries and potato chips, these let the potato shine through and are real winner. 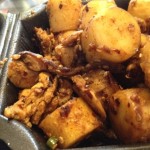 The Chicken and Dumplins are a very different chicken and dumplins – These are not Your Mother’s Chicken and Dumplings.  I was warned they may be spicy, and there is definitely some heat.  It probably won’t register much for a true chile head, but the sauce was distinctly spicy & had good heat.  The dumplings were a bit chewy and dense.  The same dough may be used for both the buns and the dumplings, but the different cooking method could be the reason for the different results.  I also asked for it to go, so there may have been less ramen broth for that reason. The chicken was moist and well distributed.  When it is hot and your nose is getting stuffed up from the dreaded pollen, this dish will cool you off by making you sweat and clear your nasal passages.  I liked it, but you have to know what you are getting into when you order it.

There is an active promotion on twitter under the #followthedragon hashtag.  I am going to go back and get more steamed buns. Yes, there were a few things that were not 100% perfect, but they still are worth a visit or two in the next few weeks as everything shakes out.  A few more passes through the menu and we will see if they can keep those delectable buns just as tasty as today.