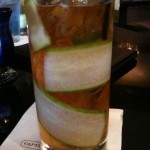 In honor of Wimbledon, give the Pimm’s Cup a try. The Pimm’s Cup is one of the traditional drinks of Wimbledon & has a distinctive British pedigree. The Pimm’s No. 1 liqueur is a gin based concoction of herbs, spices, flavors, and all around pleasantness. There have been other versions over the years, each number indicating a different base liquor used for the bottle, but the No. 1 is the only regularly available Pimm’s .

Pimm’s No. 1 itself is a slightly herbaceous, somewhat unusual flavored drink.  It has a little bit of earthiness with a complexity to any drink.  Think of them as a more accessible bitters, if you must.  While there are a handful of other drinks using Pimm’s No. 1, the Pimm’s Cup is the most frequent use of this glorious beverage.

The basest of Pimm’s cups is just a specific highball. In a tall glass full of ice, add one part Pimm’s to two parts mixer. This can 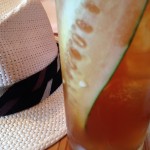 be lemonade, lemon soda like sprite, ginger ale, or ginger beer. Give it a quick stir, the carbonation will do the rest. Pimm’s is low alcohol, about 25% so this can be sipped throughout the afternoon in good stead.

Now the variations step in; I’ve even made a Pimm’s Cup Punch for summer parties

Many versions add a shot of gin to up the potency of the drink. Hendricks is popular because it will play up the cucumber flavors in the Pimm’s Cup traditional garnishes -cucumber slice & lemon wedge. As we noted above, the mixer used to make a Pimm’s Cup will vary with the region, the tastes, and the availability.

Ginger beer adds a spicier and more robust flavor to the drink, with a hint of lemon juice squeezed in to balance this concoction. I always keep a bottle of Pimms at home. 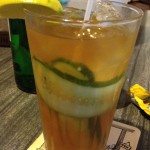 Step 1: Fill a cooler or double highball glass with ice.

My favorite version, however, is not as balanced. If you have not realized by now, I am a citrus junkie. Using a bitter lemon soda, like the Pellegrino limonata only recently available here, you get a bracing & exciting Pimm’s Cup. 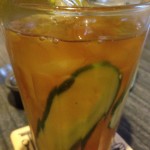 Step 1:  Fill a cooler or double highball glass with ice 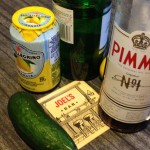 Between Wimbeldon and the Summer Olympics, this is the perfect time to dip your toe into a little British refreshment this summer.  Raise your Pimm’s Cup and relax in the sun.