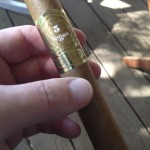 Drink
I was drinking Starbuck’s Italian Roast – black, this is a very bold coffee. If I had cream or sugar in my coffee (which is a sin to the coffee gods) it would’ve enhanced the flavor notes of the cigar.

Draw
The cold draw had a caramel, nutty taste – very sweet.  The lit draw on this cigar was good – not too tight, not too loose, just right. It produced a decent amount of smoke too on each draw.

Burn
The burn was nearly razor sharp throughout the entire cigar. I was very impressed. I didn’t have to do any touch-ups at all. 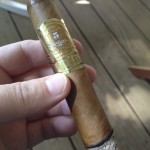 Flavor
Right off the bat the flavors were a light nutty, creamy taste that had a spicy finish, but the spicy finish was only at the beginning, it didn’t last long. This is a mild bodied cigar, there were a few times it showed hints of medium body but overall it stayed in the mild body realm. When the cigar warmed up and I got into the first and second-thirds of the cigar there wasn’t much of a change in the flavors. It was nutty, creamy, toasty, and had a light hint of wood; but primarily nutty and sweet were the flavors that I kept tasting on each draw – very tasty. 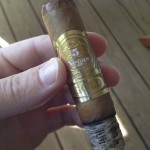 When I got in to the final-third of the cigar the nutty flavor transitioned to a specific almond taste and it was impressive how distinct the almond flavor was. The finish continued to be a clean, creamy finish and the sweetness would stay for a short bit on the lips.

Overall
There wasn’t too much complexity to this cigar, but that’s not necessarily a bad thing. It was straight forward nutty and creamy. Sometimes a cigar with a consistent flavor will hit the right spot.

I tend to compartmentalize my cigars as a “session cigar” where I sit down to enjoy it with a tasty beverage, versus a “golf cigar” where I’m a bit more concerned with paying attention to my golf game than paying attention to the cigar, but this cigar fell somewhere in-between. So it could be considered a multi-tasker where you could do both and be happy and confident you’ll enjoy this cigar.

I would most definitely buy this cigar again and normally you can find it for about $5-6 per stick (here in Arkansas it is always a bit more expensive because of our ridiculous cigar tax). Please remember to support your local brick and mortar retailer. You can normally find cheaper prices online but the local brick and mortar stores are the heart and soul of the cigar culture in your city. And there’s nothing like going in to a store and handpicking your own cigar.