It is the time of year when Shakespeare is in the air! Monday, April 23, is Shakespeare Day! We know William Shakespeare was born sometime before April 26th and died on April 23rd, so Shakespeare Day is traditionally celebrated on the 23rd. 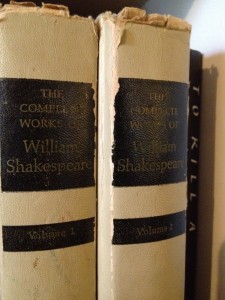 This is a great chance to up your cultural quotient and explore a bit of the Bard.  The Clinton School for Public Service Speaker Series is hosting an event on Monday the 23rd called “Shakespeare on Trial.”  While the authorship of the works is generally attributed to William Shakespeare of Stratford-upon-Avon, there is a minority which dispute that. This event will dramatize some of that for Shakespeare Day. Shakespeare’s works are credited with changing the way we use language and the way that stories are told.  Shakespeare’s works are even credited with changing the way in which we perceive the human condition.  See Bloom, Harold.  Shakespeare: The Invention of the Human. Riverhead Books, 1998. Do something a little different and go to this event.  Best of all, it is free. Here is the CSPS description & information on how to reserve a seat:

Shakespeare on Trial
For centuries, controversy has raged over whether William Shakespeare is the true author of the plays attributed to him. Was it Shakespeare himself, or some nobleman such as the Earl of Oxford merely using Shakespeare as his front man? In an imaginative trial, Shakespeare will be out to settle the question once and for all by bringing suit in the Arkansas courts, with Judge Joe Volpe presiding. Top Arkansas attorneys will serve as the prosecution and defense as Shakespeare’s birthday is celebrated in the courtroom.
When:    Monday, April 23, 2012
6:00 p.m. – 7:00 p.m. – Mock trial
Where:   Clinton School of Public Service
Sturgis Hall
*Reserve your seats by emailing publicprograms@clintonschool.uasys.edu, or calling 501-683-5239.