The Pipe and Tobacco Shop in Little Rock

Full disclosure: I am not employed by, paid by, related to, or have any other direct connection to The Pipe & Tobacco Shop (hereafter P&T) besides buying most of my cigars and pipe tobacco from them. Greg (the owner) did treat me to a cigar when I mentioned I would be writing a review of his store for our blog.

I moved to Little Rock in March of 2008, and after finding a place to lay my head the next two top items on the priority list were to find some golf courses and a good cigar shop. Thankfully I found both, and The Pipe & Tobacco Shop helped this Kansan settle into my new state by selling me great cigars that I can enjoy in the store or take home to enjoy at home…and they also sell more than just cigars. 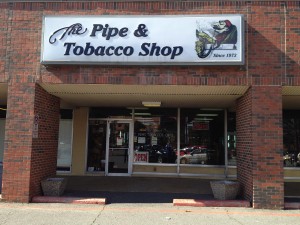 P&T is located in a strip mall at 2908 S. University Ave. across the street from the University of Arkansas at Little Rock. They are south of I-630 and Midtown by about 5 minutes. It’s very easy to get in and out of the strip mall and because of their central location they are only about 10-15 minutes from anybody who lives south of the river. 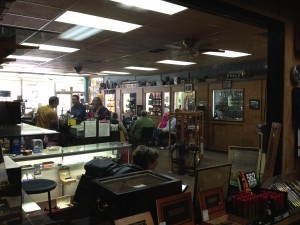 P&T has a spacious shop with a highly functional layout that comfortably allows for making a purchase and heading out, or sitting down to enjoy your cigar. They have one round table situated in the middle of the shop that seems to be occupied by the same cast of characters whenever I walk in. Don’t be afraid to pull up a chair – everybody’s friendly. Or if you are there with a friend and prefer to chat somewhere besides the round table they have a couple other smaller tables and chairs available in different areas of the shop.

It may seem a little smoky inside but that’s only because people are hanging around and enjoying their cigars in a place that feels close to home. I think that’s a great sign of how welcoming and comfortable Greg and his staff make their shop. I’ve been to many cigar stores in other states where you aren’t allowed to smoke inside the cigar shop (and for awhile smoking in P&T wasn’t allowed either because of the strip mall property manager, I think, but I might be wrong), and also because of the increasingly intrusive laws legislating smoking. But even if you were allowed to smoke inside some of those other shops you would not want to because of their lack of a welcoming feel – that’s not the case at P&T. P&T has a very welcoming atmosphere and smoking is not only allowed but encouraged, so light up and puff away to your heart’s content.

At a cigar bar it’d be smart to carry cigars…but wait, they also have more than just cigars 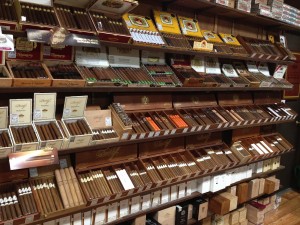 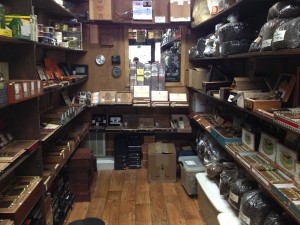 The first time I walked in to P&T I was very happy to see the size of their primary humidor and the variety of cigars they carry. They offer almost every popular cigar manufacturer you can imagine: Rocky Patel, Davidoff, AVO, Arturo Fuente, Partagas, Punch, Padron, Cain, La Gloria Cubana, Camacho, Cohiba, etc, etc. If flavored cigars or cost effective cigars are your preference, they carry those too. The problem I have sometimes, is deciding which cigar to smoke because of their wide selection and the fact that I enjoy trying new cigars. That is where Greg and his staff are a huge help. Most of the time you’ll find Greg with a cigar in his mouth and wearing short sleeve hawaiian shirts and once you speak to Greg you’ll see that it suits his personality – he is a laid back, friendly guy. Greg and his staff are very knowledgable about their cigars in knowing the origin, the flavor notes of the cigars, and even offering comparable alternatives if you’re interested. So if you’re like me and want to try something new feel free to ask anything about their cigars or recommendations and they’ll be more than happy to help you.

They are also willing and able to help with more than just cigar recommendations. About a year ago I was having problems with my home humidor’s hygrometer reading significantly lower than what I knew the humidity to be. I mentioned it to Michael (a P&T employee) and he said to bring it in with me next time. I stuffed a washrag in the hole where my hygrometer sits in my home humidor (so as not to let the humidity escape my humidor), removed the hygrometer and headed to P&T. Michael took the hygrometer into their large humidor to let it sit while I sat and enjoyed a cigar. After a short time Michael checked on my hygrometer and then made a few simple adjustments to calibrate it correctly and it has worked like a charm ever since.

P&T has two humidors; one is immediately noticeable when you first walk in to P&T; it is at the very back of the store and is considerably larger than their second humidor. This is a total guess off of memory, but I’d say it’s about 25 ft x 15 ft – don’t quote me, but just know it’s big and extremely well monitored to maintain the necessary humidity to store cigars. The second humidor is located along the left wall behind one of their accessory counters and you might not notice it if you don’t know about it, but don’t be afraid to walk into this humidor just because it’s behind a counter. This humidor is my favorite of the two humidors because this is where they keep some of the pipe tobacco which gives it an awesome aroma. It’s smaller than the other humidor, probably 15 ft x 8 ft (again, a guess), but in this one you’ll find a great selection of AVOs, Gurkhas, Opus Xs La Flor Dominicana and just about every Rocky Patel you can imagine! Do not skip this smaller humidor – in this instance size definitely does not matter. (wink wink nudge nudge) 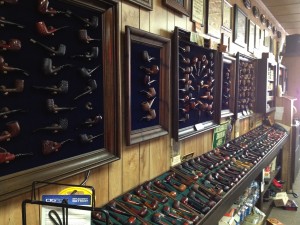 At P&T, cigars may be the primary focus, but they also have a large selection of pipes and pipe tobacco. I enjoy smoking a pipe at times as well and I buy all my pipe tobacco and supplies from P&T. I highly recommend the Broadmoor blend. In addition to cigars, pipes and pipe tobacco they also have an assortment of accessories like cutters, lighters, ashtrays, humidors, traveling cases and many other items. They also carry non-cigar related items like canes, old school throw-back signs, candles, and other novelty items. 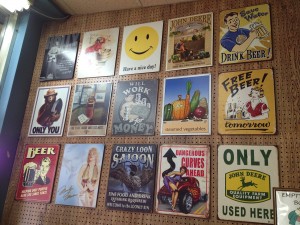 Hours, Drinks & Munchies, & We Fought the Law and the Law Won…the Battle

Hours of operation – Their hours of operation are 10am-6pm weekdays and if you can’t get there on a weekday before they close never fear, they are also open on Saturdays from 10am-5pm. They are closed on Sundays.

Drinks and munchies – For drinks they have a stocked coke machine that has a variety of soft drinks and they also coffee available. Oftentimes a good cup of coffee and a maduro cigar is a match made in heaven. For munchies they have chips and other assorted snacks to make your tummy feel good before you light up.

The Law Won the battle – Again, I moved here in 2008 and not long after I moved here the Arkansas Legislature enacted a ridiculously high tax on cigars (68%) to help fund trauma centers in Arkansas. Since the tax increase was enacted I know of at least 3 cigar stores in Arkansas which had to close their doors: 1 in Hot Springs and 2 in Northwest Arkansas. There is no doubt that type of tax hike will be felt in a businesses’s pocketbook, but Greg with his great store and loyal customers has weathered the storm. We owe it to him to continue to support his shop. I was raised with a mindset of supporting local business and am very happy when I buy my cigars from Greg.

At P&T, their vast selection, cigar-knowledge, friendly staff, and welcoming atmosphere is a haven for all who enjoy a good cigar with good friends, or also an excellent place if you’re just stopping in to purchase one to enjoy some place else. There are few times where I feel at ease speaking with people who are trying to sell me something (rather ironic considering I’m in sales) but Greg and his staff make it fun, enjoyable, and a learning experience to speak with them about their cigars. Visit them today!