The Pantry opened in 2009 and really filled a niche in Little Rock. It focuses on Eastern European cuisine such as German and Austrian, something underrepresented in the Little Rock market. They take themselves seriously with respect to the food they put out and the drinks they serve, but strive to be a welcoming place. I think they succeeded. 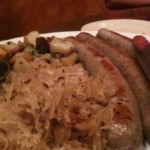 The food is, almost without exception, delicious. As I mentioned above, the Pantry specializes in Eastern European food and that is where they really shine. For appetizers, you have a lot of options, but my friends and I routinely order the Pantry’s Board with the collection of meats and cheeses for the table. This includes 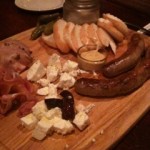 the house-made bratwurst and a truly enticing pate with strong dill flavors.

The wiener schnitzel has always been a standout option. This breaded and fried dish, a relative to the country fried steak, is done to perfection. As a friend of mine said, “This is the best schnitzel I’ve 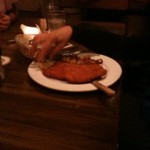 had since I was in Austria.” Hard to get a higher recommendation. There is also a jaeger schnitzel which is a slow simmered pork loin topped with a mushroom sauce and a house made bratwurst which remain tasty. My favorite, entree, though, is the best pork dish I have had in Little Rock. The slow roasted pork shoulder remains mouthwatering delicious, beautifully moist, and still full of flavor. It takes a strong force of mind for me not to order it whenever I am there. 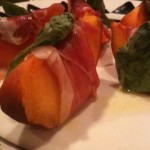 The fish and chips and lasagne they make are also quite tasty. There is nothing wrong with them, but I have trouble not going for something closely held to their 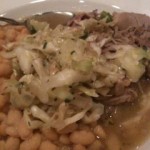 heart. Occasionally, there has been a debate over whether one or more of the dishes are over seasoned, so if you are watching your sodium intake see if they can trad lightly on the salt.

You may wonder what sort of effort is put into the bar program. The answer is a 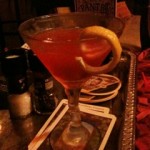 lot. Coupling the heart and soul of the restaurant’s Eastern European traditions, the Pantry has a well curated beer selection. While there are more beers on the menu here than other places, it is not overwhelming in options. The most consistent recommendation is for the Czechvar or “Budvar” which comes from the Czech republic and outside of the U.S. is known by another name. For you Louisiana expats, Abita is on draft.

The wine list may be the weak link in the bar program. There are a only a dozen wines available by the glass and bottle with another dozen in the reserve cellar category. I do like that the wines have a good selection of different types and regions which may not always be prominent at most other establishments. 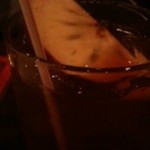 Shane Parker is the Bar Manager. Shane is pretty awesome. I have known him for a while and he brings a distinct taste to the cocktails at The Pantry. The list is seasonal, so it changes every 3 or 4 months, but it is always a collection of slight riffs on classic cocktails. There may be a few that are distinctly original, but for the most part it is adding interesting twists and dimensions to the classics. For example, the riff on the 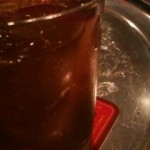 Manhattan is called a Spiced Big Apple. You combine apple and cinnamon infused bourbon with vermouth and bitters garnished with an apple slice. It may be a Manhattan, but it has its own flavor. They are still closing out their fall and winter cocktail menu, so go now to try those out and then go back when the new menu shows up for a different treat!

I love it. The walls are a rustic orange with decorations that give it a feel like no place else in town. There 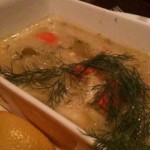 are three distinct areas in the restaurant – first there is the lounge area. This is one of my favorites. The bay windows by the front of the Pantry have a couch and comfy chairs set up with a very relaxed atmosphere. You can even reserve this lounge area to make sure you and your friends can stretch out and relax. Just beyond the lounge is the general bar area with a handful of stools at the bar itself and several bar tables for added room which, while not as awesome as the lounge, makes a great after work happy hour destination.

The main dining room can 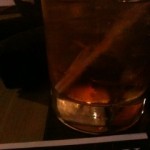 actually be split in two to accommodate a large private party in the back and is just a little on the noisy side so that it creates a fun atmosphere. Too much noise and you get drowned out, but this is that level of noise that reminds you that you are out for fun and that other people are there too. The patio, especially in the spring and fall seats even more and adds that element of al fresco dining that can easily be overlooked. It calls out for a refreshing beverage, sunglasses, and a Saturday afternoon. The owner, Tomas, is there more often than not. He is a warm and friendly presence who genuinely wants people to enjoy their time there. I don’t have pictures to do it justice. They do a pretty good job on their website. Check it out.

As a bonus, the Pantry is also in that perfect price point for fun. It isn’t a dive bar with dive bar prices, but it hits what I think is the sweet spot for Little Rock. The entrees are between 10 & 20 dollars at dinner. Two “splurges” are the NY Strip steak at $25 and half of a roasted duck at $28. The drinks, which I already raved about above, are around $8 each, and I have always had a great time there. If you are one of the tweeps, you can find them on twitter here. The Pantry – one of my favorite haunts!