Sync Weekly has their spring fashion issue out now. We have another example of how menswear is pretty much an afterthought in town.  Initially, I want to say that Andrew Goins, who they featured, is a fantastic artist and I am a fan of his music both solo projects and Suga City.  He also has a great sense of style.  That said, the piece on male style for the spring which featured him clocks in at 82 words. An additional 75 words exist in captions to the pictures provided. We have already surpassed 82 words at this point.

While I wholeheartedly agree that bow ties and pocket squares are cool and a deserved part of any man’s wardrobe, the editors have it wrong. The title says it is about using pieces “of yesteryear” in his wardrobe.  Nowhere does the brief article mention any bow ties or pocket squares as vintage.  Pocket squares are a mainstay.  They are common today.  The writer is not up on what happens in m 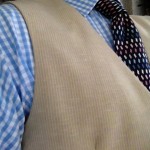 enswear from this point alone. We have surpassed the additional 75 words at this point. Sync has done features on Goins before and I think he could have offered a much greater insight if the idea of menswear had been taken seriously by the publication.

The idea of color isn’t mentioned.  How to assemble outfits isn’t mentioned.  In the three spreads for womenswear, there are tidbits like that.  There are mentions of ideas like color blocking and how clothes are used.  The menswear section is devoid. I started writing these posts here because I was tired of publications regarding menswear regressing to the norm.

At least the Arkansas Times put a menswear guide together for where to buy clothes.