For months I have been looking for something that will allow me to turn my cigar room into an actual cigar room. I have a beautiful humidor, great lounge chairs and a bar; all of the perfect makings of a cigar room. There was just one problem, I couldnt actually smoke in my cigar room.

Occasionally I like to smoke a pipe and was looking for something that would pull the smoke out of the living room. I settled on the Sanyo Air Washer and have been more than pleased. Albeit, I only smoke indoors once every week or two and I have high ceilings and things are open. The air washer quickly pulled the smoke out of the air within a 30 minutes or so. It features a hepa filter, high speed fan, front intake, and electrolyzed water. I also have an Ionic Breeze from Sharper Image. Now, it may kill me but my house smells like rain!

Recently I became obsessed with finding the perfect air purifier. I wasnt looking for one that helped with germs and allergies, I was looking for one that pulled smoke out of the air. I came across the RabbitAir, which received some fanfare at IPCPR. Despite the lack of reviews, it looked good on paper and I thought I’d give it a try. RabbitAir units are re-branded Mitsubishi air purifiers from Japan.

How Does It Work? 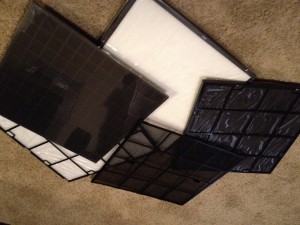 The RabbitAir A2 is actually a very impressive gadget with six different filtration components.

1. Prefilter to catch debris
2. “Medium filter” to, uh, catch smaller debris?
3. A HEPA filter, standard in most air purifiers
4. A Customized filter – When you order you can select a filter based on your primary use. Germ Defense, Pet Allergy, Toxin 5. Absorber and Odor Remover are all customized filter options. For this unit I selected the Odor Remover, which is made of primarily carbon.
5. A Charcoal Filter – to also absorb odors
6. Negative Ions – Charges allergens, making them fall to the ground

Additional filter kits can be purchased for $75 for the company. The filters are rated at 1-2 years under normal use.

A rotary fan with five speed settings allow the unit to move 187 cubic feet of air per minute on its highest setting, meaning that the unit can completely recycle the air in a 700 square feet area twice per hour. I’ll be using it in a 300 square foot room.

This thing’s got some bells and whistles. There’s an odor sensor that works with it’s automatic feature. It smells something, it kicks on with a speed relevant to the amount of odor in the air. A particle sensor constantly takes readings and turns the system on if it detects, yup, particles. There’s a light sensor, for the mood light which thankfully you can turn off.

Unboxing the unit is simple as it arrives completely assembled. All that is required is that you remove the plastic covering from all five filters before use. The unit is a sturdy 20 lbs that even has wall mounting equipment (for $9.99). 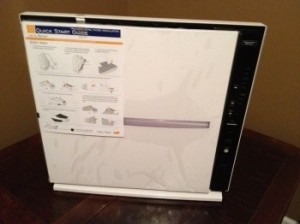 But… Does It Work?

After plugging it in, I switched it into auto mode and a friend and I lit up cigars, lanceros to begin the venture into indoor smoking. Immediately, the indicator light switched from blue to purple to red, indicating that the air was impure. The machine switched to high, which I manually switched to turbo. The fan slowly reaches its maximum speed, it doesnt just start whirring, which is kind of a classy touch.

The remote is unimpressive. It feels cheap and you have to be right next to the unit for it to work.

We noticed that the room was not becoming smoky, there wasn’t a haze developing. All of the smoke seemed to float towards the machine and disappear. The room wasnt windy but you could tell there was a current, or a draft. The Rabbit Air MinusA2 has passed the first part of my test: It would seemingly remove the smoke from the air.

After letting our cigars go out we noted there was still definately cigar odor in the room but it didnt seem as there was any actual smoke.

After coming back into the room 10 minutes later there was still a prominent smoke smell.

It was still present an hour later. What the hell, I lit another cigar. Discouraged, I read another review that said the unit will clean overnight, removing the odor by the morning.

The next morning, around 12 hours later, I entered the room only to find that the odor of cigar was still prominent.

I’m disappointed in the RabbitAir MinusA2. I thought this would be a miracle machine that would make smoke magically vanish from the air and allow me to finally smoke indoors. I dont doubt that it is superb at pulling pollen, dander, germs and other pollutants from the air but the promise of smoke removal is what made me purchase the unit, despite the $459 price tag. With filters only costing $75 to replace, it makes you wonder what the other $375 went for. I would imagine you could buy your own filters and rig them to a box fan for a similar effect.

It appears I’ve added another air filter to my collection. My only course from here is to install an in-ceiling unit. Unfortunately, I cannot recommend this to someone looking to smoke cigars inside.

After days of trying several methods, I’ve found that I can indeed smoke in my cigar room by giving the RabbitAir some help.

The room has to have some ventilation. I tried first by opening the window and turning the AC fan on in the house thinking that the AC would push air out the window. This provided minimal ventilation. From there I arrived at my current solution; open a window or two in other rooms and (ghetto as it may be) place a box fan pointing out of the window in the smoke room. You will feel air coming in your door if you’ve done this right. Do not place anything like a towel under the door because you want the air to flow through.

The RabbitAir needs to be high up. Assuming your window is square and lower to the floor as it is to the ceiling, the smoke will be pulled out of the bottom of the room by your air current, leaving the RabbitAir to catch the smoke that is up high. In automatic mode, you can see the color indicator change from blue to red and back to blue as it handles the leftover smoke.

Even after this you still cannot count on anything to actually kill the smoke smell, you must have something to cover it up. I was given a Scentsy last week so I’m using it afterwards to give the room a nice fragrance. You must be careful not to run the Scentsy and the RabbitAir at the same time or you’ll just end up wasting the Scentsy and reducing the life of your filters.

While what I do is not perfect, its the only solution that I’ve found will work. I give some credit to the RabbitAir. Ive learned that if you smoke indoors, its going to smell like smoke. Cigars are big and nasty and put off tons of smoke. However, I think the RabbitAir helps keep that odor contained in one room without spreading to the rest of the house. I think it also works well over time to eliminate the cigar odor, leaving the room smelling tolerable.

I’m willing to repaint and recarpet when I sell the house.