Sometimes, meat is out of the question.  Some people choose a vegetarian or vegan lifestyle for health or moral reasons.  I received a request to write a few stories or posts that are Lent friendly.  Catholics are situational vegetarians.  Tenets of the Catholic faith require abstention from meat and poultry on Ash Wednesday and Fridays in Lent, the period leading up to Easter. Hence the Situational Vegetarian!

The first dish I am going to cover is a staple preparation that is easily adapted to different recipes. Sweet Potato “Hash.” This is the basis for a lot of lunches and one pan dinners that I make. You will have to do some knife work and use two different cooking methods. 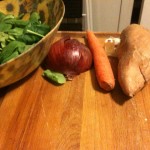 Step 1: Prepare the Ingredients. You will need to dice or chop your vegetables to get read to cook them.  Instead of grating the sweet potato to make a classic hash I dice it with the other veggies.  Slice off a flat 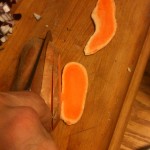 portion of the sweet potato so it has a stable base.  Then you want to slice off equal thickness strips which can then be stacked and sliced into sticks.  This collection of sticks is sliced to make our dice.

The onion gets the fake dice treatment where, instead of slicing a grid in the half of an onion, I slice radially as demonstrated in the picture, before “dicing.” 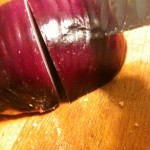 Step 2:  Place a tablespoon of butter in the cast iron skillet and put over medium heat.

Step 3: When the butter has nicely melted but before it is browned turn the heat up to medium high and place the vegetables chopped and diced in Step 1 into the pan. Don’t worry about crowding the pan.  Let the bottom layer brown nicely, about three to four minutes.

Step 4: Stir the pan to redistribute the veggies and get a new layer on the bottom on the pan. Cook for another three to four minutes

Step 5: We shall now steam these little buggers! Add vegetable stock or water to the pan and cover with a lid.  Let the steam do more of the cooking.  I used vegetable stock & some dry vermouth this time.  After about 5 minutes, taste a cube.  If it is about done, turn off the heat.

Step 6:  The cast iron will retain the heat, so add the spinach and stir it through. Let the leftover heat 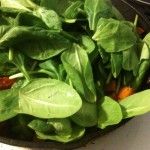 cook the spinach and evaporate the water that is left.

Step 7:  Spoon the “hash” onto your plate, cut the lemon in half and squeeze over along with some olive oil. 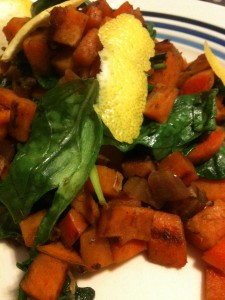 Other options include starting with crumbled sausage instead of the butter, browning it and then moving on using the rendered sausage fat instead of butter to start the dish. As far as leftovers go, I will beat an egg or two and pour over the “hash” to make a fritatta. 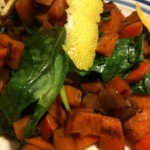 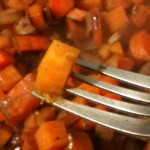 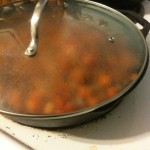 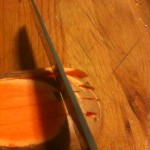