I received the Romeo y Julieta 1875 Habana Reserve in my stocking from Santa; he knows what I like. A couple informational notes before I get into the actual review:

1) I allowed it to stay in my humidor for about 6 weeks before smoking it, but it might’ve been better to wait a little longer.

2) I paired the cigar with B&B on the rocks; one of my favorite drinks for a quality cigar.

3) I had read several reviews on this cigar before I received it as a gift and was excited to try it. I think I was especially excited to try it because Romeo y Julieta’s Reserva Real is one of my all-time favorite cigars and I figured this one would be of similar exceptional taste and construction.

Made in Honduras. Honduran and Nicaraguan filler with a Nicaraguan wrapper.

It had a soft spongy feel, but not overly spongy, just a little give when squeezed. The weight made it look consistent for its size – 7x 54.  Since it was a pretty good size I knew it would probably be a pretty good investment of time. The total smoke was about an hour and a half, but I tend to smoke my cigars a little faster than most others.

The initial cold draw before I lit it was similar to fresh hay along with a little sweetness and there also seemed to be a feint hint of chocolate or caramel. Tasty.

The wrapper was a little oily primarily from the dark wrapper (I prefer it when it looks a bit oily) and a good looking cigar overall. Good quality construction. 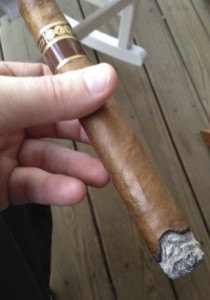 The flavor of the cigar was definitely a more robust take from Romeo y Julieta. Most Romeo y Julietas I’ve had are light to medium body cigars. On the initial light it was immediately medium to full body with a light leathery taste, and then a slight peppery taste on the smooth finish. It was a very short, crisp finish – it didn’t linger long at all initially. The aroma from the smoke was very pleasant, not harsh or overwhelming.  It took a little while to pinpoint the flavors – not because the cigar was complex, because it wasn’t – but just because it seemed a bit deceiving. On the initial inhale it seemed like it was going to be a nutty flavor but it kept coming right back to a clean leather taste. I had planned on breaking down the flavors by each 1/3rd through the smoke, but the flavor profile did not change much during the entire hour and a half smoke. The only variation during the smoke was that the leathery taste and peppery finish built gradually; other than that it was pretty consistent throughout.

The burn during the whole cigar was very disappointing as it was very inconsistent and uneven.  It would be fine and then gradually start to burn unevenly but then would always correct itself not long after. It never got so out of control that I had to touch up the burn with my lighter. But it was a bit disappointing.  The ash was also an adventure – it was a very loose ash and it never got longer than about 1” inch before falling off. There was only one time where the ash made it into my ash tray because it continually fell off on it’s own, so it kept me on my toes while I was smoking it.

The draw itself was almost enough to make me not buy another one of these cigars. The draw was very tight – not Cuban cigar tight but too tight for my enjoyment. I even tried to recut it to open it up a bit more but that just resulted in me knocking the initial ash off.  And it stayed tight throughout the entire cigar.

The drawbacks were the tight draw and the very loose ash, but I would still recommend this cigar to others. I think I seemed a bit deflated because I had higher hopes for it, but it’s still a good cigar. I think in most places you could find this for about $8 a stick which puts it a little more expensive than your everyday smokes.  If you’re looking for a complex cigar this won’t be your choice, but if you’re looking for a medium to full body flavorful smoke, AND if you can find it in a value pack you won’t be disappointed. But because of the draw it wouldn’t be my first choice.

*Derek Blaylock is a newly wed, a medical salesperson, an amateur cigar aficionado and an overall terrific human being.  He’s active on the twitters.