The Little Rock Burger Caucus met at Burger Mama’s recently and I thought I would share that experience with you.

The Burger Caucus is a loosely organized collection of ne’er-do-wells primarily with some political bend who meet ever month at different locations to have burgers and engage in what can only be called jibber-jabber. The story of the Burger Caucus best begins with the inestimable Hot Dog Mike. During the Arkansas General Assembly of 2011 the Democratic Party let Mike use parking space right next to their building within view of the front of the Capitol to set up.  On Twitter, discussions began on the bipartisan nature of the Hot Dog, and quickly morphed into discussions of hamburgers.

The LR Burger Caucus was born of the stress of session and fed on the insanity of social media.  A collection of politicians, 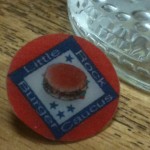 reporters, wonks, and pundits gathered under the chairmanship of Mr. Andrew DeMillo.  We meet once a month in our quixotic quest to discover the best burger in the Little Rock and central Arkansas areas.  We try to alternate between dinner and lunch, maximizing the number of people who can attend.  We range from 4 to nearly 20 at a time.  All all welcome if you enjoy the Burger and good company. And now we have lapel pins. Oh yeah.  We rock like that.

Now on to the immediate review – Everything is a la carte from the fries, to the extra packets of salad dressing, and including refills of soda.  On the surprising side, there is a full bar and not just beer and wine.  The burger itself is pretty tasty.  I was not asked how I wanted it cooked, and got it well done.  It had a little bit of juice and some grease, but not drowning it.  This reminds me of the 5 Guys juicy & most version of well done for comparison.  My experiences with the Burger Caucus have helped me refine the idea of the Burger Continuum.  In my mind, a Burger will fall somewhere on a scale from greasy to meaty on the x-axis.  The y-axis is still being developed.  This burger was just to the greasy side of the scale, in a good way.  More interesting for me was what I call an Old South style – the seasoning.  The Burger was liberally seasoned with salt in an almost crust like result.  There was not a full on salt crust griddled onto the burger, but the salt was unmistakable.  It was not too much for me but I wouldn’t want to eat a triple stack of patties with that much flavor enhancers. 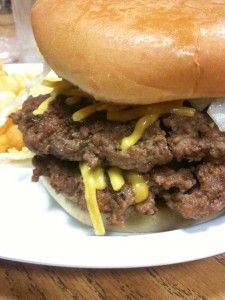 When I glanced over at Mr. DeMillo’s option, I saw chili that looked more like a sloppy joe completely covering the burger patty which we were certain had to be in the sandwich somewhere. Being a bad blogger, I neglected to take a picture of it.  The shame.  The shame. That looks like the best option I saw and worth it.  I am not sold on the appetizers but nobody tried the frito pie, so a return trip may be required.

We had a few hours of burgers, gossip, prognosticating, and good company.  Come out for a meeting sometime and join the Burger Caucus.